MARKET
Washington:
Brenden Kent with Sunset Produce in Prosser told us on Dec. 18 that demand is steady. “Demand has been decent,” he said. “Not much has changed in the last several weeks. We are shipping what makes sense for our company, and things are moving right along.” He continued, “I wouldn’t say this year has been anything special. Of course, mediums do so well around the holidays so there is quite a bit of movement there, but overall there really hasn’t been much change to demand or the market.” Brenden noted, “It does seem that imports have had an impact. Peru shipments are doing well, and other areas like Canada had a good crop too.” He also said quality is good. “Our quality has been pretty good. Of course, some lots did better than others with the weather,” he said. And on transportation, Brenden said there haven’t been any issues. “We haven’t had any problems getting trucks for the lanes we need, so things are pretty smooth transportation-wise.”

Idaho-E. Oregon/Washington:
Jason Pearson with Eagle Eye Produce reported on Dec. 18 from his Nyssa, OR, office, saying, “Demand is good this week. The Christmas pull is a little weaker than expected. I think this is due in part to Christmas falling in the middle of the week. Still, I would say that demand is steady.” Jason continued, “We are getting a lot of calls for whites.” Noting the market looks to be strengthening for some colors, he added, “The market is getting better for yellows, and it should be getting stronger for whites, too. The market remains steady on reds.” He said quality has been very good and added, “On transportation, we are just getting trucks when we can find them, so not much new to report there.”

Idaho-E. Oregon:
Dan Phillips with Central Produce Distributing in Payette, ID, provided a very encouraging report this week. “Demand has been exceptional!” he said. “All sizes and colors are doing really well, and yellows are through the roof. I think part of it has to do with the Christmas pull and the fact that buyers are trying to meet their schedules for supplies through the end of the year. We expect with Christmas in the middle of the week, some of the demand will drop of next week.” Dan also said the market is pushing up. “Well, we have been running until 10 and 11at night, and with the demand the way it is, there is no reason not to push up.” He continued, “And I am getting that from around the valley too.” Dan said the quality of Central’s shipments is good. “Last year the onions needed almost no grading because they were so good, but this year it’s no secret we are putting more labor into grading. But we have very good quality going in the bag!” He noted that freight prices are high. “We can get the trucks, so that’s not a problem. However, some of these freight rates are crazy, but you do what you have to do.”

Utah:
Don Ed Holmes with The Onion House in Weslaco, TX, told us Dec. 18 his Corinne, UT, deal continues “to roll right along.” He said, “Movement was good last week and is good this week as well. The markets are trending up and feeling stronger.” Trucks, he said, are tightening up as they normally do during the Christmas season. He added, “We’ll finish up in Utah mid- to late January, and Mexico will be starting around that time.”

Northern Colorado:
John Harris with Paradigm Fresh in Fort Morgan weighed in on Dec. 16, noting, “Christmas is around the corner, and this week will be a busy one.” He added, “The next two weeks will include multiple days off for many sheds across the country, which usually creates a bit of an artificial lack of supply.” And, John said, “Demand always dictates where price will go, but the words ‘we are sold out’ from many shippers over the next two weeks, usually creates some market excitement and uptick in price.” He said, “My advice to you is to order enough onions this week to get you through the next two weeks,” saying all colors are going to hold well for several weeks when stored with good airflow. “Do yourself a favor and get in front of the shortage of both onions and trucks as it is coming as soon as the end of this week,” he advised. Paradigm Fresh has good supplies, he said – “a little of everything” – and John said freight is “pretty reasonable here in Colorado, and we are close by no matter where you are.”

Broker’s Perspective:
We got Rick Greener before he headed home to Ketchum, ID, from Kentucky. “Demand has been steady this week,” he said on Dec. 18. “We are continuing to move onions out of Idaho, Oregon, Washington, Utah and Michigan.” On demand, Rick said it is “okay.” He added, “Honestly, I was hoping for more Thanksgiving push last month, and that’s pretty much the same on Christmas. I was thinking there would be more demand.” But, he continued, “That said, everything is moving in all sizes and colors. The market is steady, too, just like it has been for the last several weeks. I am hearing that Mexico is pulling more whites, so we expect the market there will strengthen. All in all, things are going well. Plenty of trucks out there too, but you are going to have to pay for them.”

Mexico:
Don Ed Holmes with The Onion House in Weslaco, TX, said on Dec. 18 the Tampico area crop continues to look good. “Everything is going really well there and in S. Texas,” he said. “Mexico should start mid- to late January,” he added. 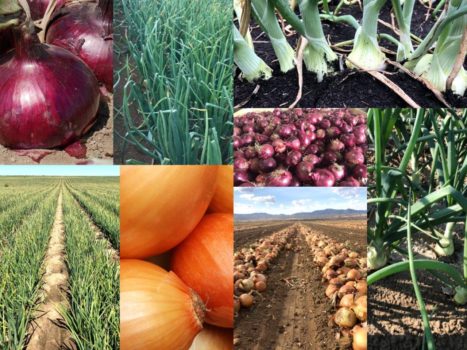