Market and Crop Update for December 21

MARKET
New York:
Rick Minkus with Minkus Family Farms in Hampton reported on Dec. 20 that the company has been extremely busy this week. “Demand for jumbo yellows and whites continues to be hot,” Rick said. “We had ordered quite a few with the idea that we would have them for a while, and we are getting a lot of requests. Plus, we are helping some other folks out with their contract stuff that they can’t get delivered.” Rick said delivery has been tough due to transportation issues for trucks and rail. “Freight from the Northwest is a real serious issue,” he said. “Recently we were promised loads from Railex, and they never showed up.” He added, “And rates just keep escalating. Truck rates keeping going up and Railex raised their prices too.” Rick said that prices seem to be edging up on medium yellows. “Canada has slowed up, which could be a contributing factor. They are having some real trouble with the new E-logs” He noted Minkus availability is good for sizes and colors across the board.

Northern Colorado:
Bob Sakata with Sakata Farms in Brighton told us on Dec. 20 the market “is doing good, $8 on mediums and $12 on jumbos – it’s steady and good.” Sakata Farms is shipping “outstanding quality,” and Bob said, “We still have a couple of more months to go before we’re finished.” He shipments will go through late February. As far as transportation for his product, Bob said, “We’re doing all right, but trucks are a real problem all over the country. The regulations are putting a real crimp in things.”

Western Colorado/Utah:
Don Ed Holmes with The Onion House in Weslaco, TX, said his Colorado deal looks like it will run into mid-January, and Utah will go until the last week of January or possibly the first week of February. “Business is very good, and we have orders on the books,” he said on Dec. 20. “Trucks are tight in both Colorado and Utah now. It seems like at Christmas everyone, including truck drivers, goes home. And then it’s usually Jan. 3 or 4 when they come back up.” Even with trucks hard to come by, he said the onions going out of both areas are “outstanding.” Don Ed said, “We saved the best for last, pushing our mediums for Thanksgiving, which is more of a retail sales day anyway. Now we have our jumbos and colossals left, and they are beautiful.”

Idaho/Eastern Oregon:
Chris Woo with Baker & Murakami Produce and Potandon Produce in Ontario, OR, reported on Dec. 20 that movement has been steady for the month and early this week, adding, “Demand has started slowing a little bit.” He said, “This month we have been managing our supplies to fill our customers’ orders and keep them happy while doing the best job we can for our growers. But it’s not unusual for the demand to slow down about now. Most buyers are going to have what they need for Christmas, so they’ll try to wrap for the upcoming holiday.” Chris said quality across the board on all sizes and colors is excellent.

Herb Haun with Haun Packing in Weiser, ID, told us that demand has been very good this week. “Basically, if you can get a truck, you can sell a load of onions,” Herb said. “That said, we have had trucks open up the past couple of days. Seems like truckers are trying to get home for Christmas so they are picking up loads to get there.” Herb said demand has been even across the board for all colors and sizes. “On our colossals, we are selling them as fast as we can get them. We are tight on whites and starting to get tight on reds.” He said that all looks positive moving forward. “Quality is very nice, and we anticipate that good pricing will continue into the New Year.”

Idaho-Eastern Oregon/Washington:
John Vlahandreas with Wada Farms reported on shipments for Prosser and Nyssa from his Salem, OR, office on Dec. 20. “Demand has been really steady this week,” he said. “My normal business is doing well, and orders are coming in at a good pace.” When asked about transportation, John said, “It’s sort of a ‘wait and see’ for me. I have loads I need to watch and see how next week goes.” John said pricing is steady. “We had a slight dip in pricing a couple of sizes and colors, but you know the movement is still there. There aren’t any real foreseeable problems with the market going forward.” He said quality is a bonus. “Boy, quality is absolutely fantastic right now.”

Nevada:
Cindy Elrod with Yerington-based Peri and Sons said the market has been “quieter in December than it was in November,” and she said the operation is ahead of schedule for all colors out of Nevada. “We’re not worried,” she said, adding the finish date is still set for the end of March. “The market has been good, but it’s not been as brisk or as high as it was last month. But we’re still optimistic,” she said.

CROP
Mexico:
Don Ed Holmes with The Onion House in Weslaco, Texas, said the Mexican onions that were initially expected to come in the first week of January are later due to two cold spells in the Tampico growing area. “We’re now looking at Jan. 20 for sweets,” he said. “Whites will come in the first of February, and reds will start Feb. 5-10.” Don Ed also said the Chihuahua deal is expected to start the third week of May and “could run as late as July 1” this year.

Mike Davis with Tex-Mex Sales LLC in Weslaco, TX, told OnionBusiness on Dec. 20 that reports from growers in Tampico indicate the crop is coming along nicely. “Like Texas, Tampico has had nearly perfect weather all season,” Mike said. “They experienced some cooler weather lately, but it hasn’t affected the crop progress at all.” Mike anticipates that though he may have some onions out of Mexico in January, it will be the first of February before significant movement begins. “Sure, there may be some shipments in January, but no one is really going to start going with any significant loads until February,” he said.

Texas Rio Grande Valley:
Mike Davis with Tex-Mex Sales LLC in Weslaco, TX reports that the Texas crop is looking very good. “The little bit of cooler weather has actually been good for the onions,” Mike said. “We have had really warm weather all along and the onions have responded well to a little break in the heat.” Mike says the onions are on track and expects a usual start date for Texas conventionals on April 1 and 1015 sweet variety in May.

Don Ed Holmes with The Onion House in Weslaco said weather in the Rio Grande Valley has been good and the crop, now dormant, should start shipping the last week of March. He predicts it will run through the third week of May.

New Mexico:
James Johnson with Carzalia Valley Produce in Columbus said on Dec. 20 the 2018 crop is “fantastic.” James said, “We got the cold weather we needed to put it in dormancy, and right now we’re on track. We’re looking at May 20 to start.” James said the program has been changed somewhat for retail in 2018, with sales handled by Onions 52. “The relationship with Onions 52 is really good,” he said. “It’s refreshing.” And he added that there will be more whites and reds and “considerably more sweets” for the retail segment. James said the spring seeded planting has been put off until after the New Year. He said warm weather had growers ready to put the intermediates in the ground, but then in a matter of two days, the temp dropped from 82 to 13. “Our very first frost was 13 degrees,” he said. And he added, “It didn’t hurt our onions.” Photos provided (including the feature image) by James this week show a beaded frost on the onions – “festive,” he said. And we agree. See more below: 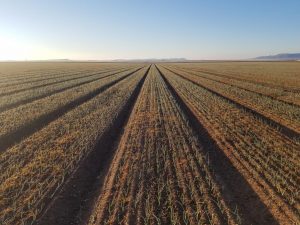 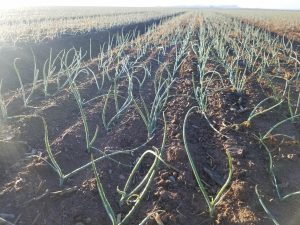 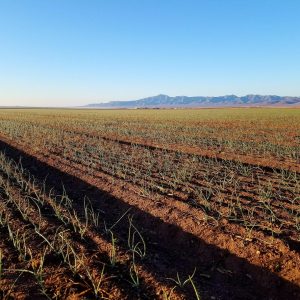 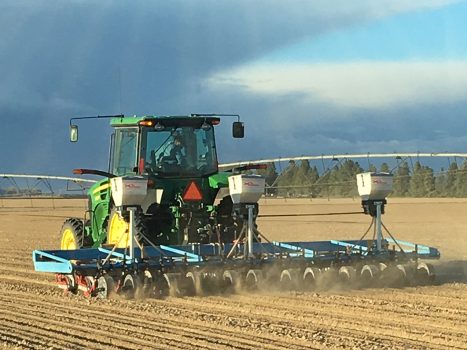