MARKET
Washington/Idaho-Eastern Oregon:
John Vlahandreas with Wada Farms reported from his Salem, OR, office on Feb. 13 to tell us, “Demand is definitely there this week, but it’s a matter of getting the onions out. And it’s problems in multiple ways. Trucks were having problems bringing onions into storages if they aren’t close by. Trucks were having a hard time getting in for pick-ups, and trucks were stalled getting out too. All you have to do is look at the major road closures to figure out what happened early this week. On Monday Washington sheds weren’t even shipping, and yesterday [Feb. 12] it was the backhoes and buckets that were making most of the money digging out loading docks.” Market-wise, John said it’s holding steady. “There was a little pushback from buyers who were trying to push it up even higher, but that has all settled out, and we are at a good steady market now,” John said. He added that Wada is shipping all sizes and colors, noting, “Availability on whites is getting pretty thin, but we do have availability. And I will say these are the best quality onions I’ve seen in years.”

Idaho-Eastern Oregon:
Jason Pearson with Eagle Eye Produce reported from his Nyssa, OR, office on Feb. 13, saying, “Demand has been very steady this week across the board. Equal demand for all sizes in reds and yellows, and medium yellows remain very tight. The market is also holding, and I think we shouldn’t be getting hasty to adjust any pricing downward. With the weather issues they are having in Washington and the inability to get onions out and the lack of any notable volume coming out of Mexico, there is every reason why the market should remain up there.” Jason said transportation has been “OK,” and he said that quality remains very good for Eagle Eye shipments.

Dan Phillips with Central Produce Distributors in Payette, ID, told us on Feb.13 that demand is off slightly. “Historically Wednesday is the slowest day of the week, so maybe it will pick back up on Thursday and Friday,” he said. “That said, it seems that demand is pretty equal for all sizes and colors, and medium yellows are still in high demand. I have been trying to assess what the lull in demand is about, and I think it has a lot to do with the weather – not just the weather in Washington but all over.” Dan said the market has weakened some. “It’s not a big dip, and most shippers are staying bullish. I know we are. Again, I see the market as remaining steady and demand picking up toward the end of the week.” And he said quality remains “fantastic.”

Chris Woo with Owyhee Produce in Parma, ID, and Nyssa, OR, told us on Feb. 13 that demand “is steady, but nobody’s breaking the door down.” Demand is best for whites, reds and medium yellows, he said. Chris said he wasn’t feeling any pressure from new crop coming in, and he said, “In this area we have adequate supplies in storage, and he added, “I’m not hearing of any sheds finishing up in February. We had one guy finish early, and some are going out in March.” At Owyhee, he said, “We will go to the end of April as part of our master plan.” Chris said quality is good, and he still has a few whites. “We also have a few organics, and we will probably do more next season.” He noted that the Treasure Valley “at this time has surpassed the number of loads we had shipped by last year’s finish.”

Mexico:
Don Ed Holmes with The Onion House in Weslaco, TX, told us Feb. 13 that he’s moving limited volumes of mostly sweet onions from the Tampico area. He had said previously the Mexican deal would likely transition to the Rio Grande Valley on schedule in mid-to late March, and the RGV could start shipping the third week of March, he said recently.

Northern Colorado:
“Retired” Bob Sakata answered the phone at Sakata Farms in Brighton on Feb. 13 and told us the operation will ship through the end of the season, which generally winds down the end of February or beginning of March. “I thought the market was going to completely stop,” Bob said. “But it’s steady. Mexico has a lot to do with it.” Reduced production in that country means “the Mexican people are eating their own onions.”

Brokers Perspective:
Jason Vee with Vee’s Marketing in Superior, WI, told us Feb. 13, “I wish I had more to report today, but it’s the middle of February. It’s a dull week.” He continued, “Weather is a big problem for me this week. A lot of my shipments are behind due to weather. Some guys are a day late loading because they couldn’t navigate Snoqualmie Pass on Monday. Many of the onion sheds in Washington closed on Monday because of snow and drifts, which is very rare. I had guys with chains on doing 25 mph trying to make multiple picks yesterday.” And, he said, “We are doing the best we can. I tell my drivers that we take delivery times and appointments seriously, but not to death. Don’t die for onions. I’ll make arrangements for weather delays.” Jason said the market now “feels very stable,” and he said, “Whites are suspect because they are so high right now. I expect that will correct itself downward soon. In fact, some of the only onions crossing into McAllen right now are whites. Apparently, demand is high enough south of the border that most onions are staying there for now. There are some Mexican 1015 carton sweets crossing, but the volume is low.”

Texas Rio Grande Valley:
Don Ed Holmes with The Onion House in Weslaco said on Feb. 12 he expects to ship 1015s from the Rio Grande Valley starting March 20-25. He said onions are bulbing and the crop looks beautiful – and he provided photos to prove it.

Northern Colorado:
Bob Sakata with Sakata Farms in Brighton said on Feb. 13 that farm owner Robert Sakata had all onion fields prepped last fall and will likely begin planting “any time now.” Bob said Rob normally gets into the field “in early March.” The operation will hold to the same program it had in 2018, with onions its only produce crop now.

Georgia/Vidalia:
Dale DeBerry with AllVeg Sales in Bourne, TX, told us on Feb. 13 he will be going to the Vidalia region “to scout out” the 2019 crop. Dale said growers are expecting a normal start date, and he said the crop looks good at this point.

California:
Megan Jacobsen with Gills Onions told us on Feb. 13, “Recent storms have provided us LOTS of the good stuff – rain on the valley floors and snow pack in the Sierra Nevada mountain range. In between storms, when it has been dry enough, we’ve been working to wrap up planting in Bakersfield. We will begin planting in King City in the coming weeks. Meanwhile, in Imperial County, our growing season is looking strong and we expect to start harvesting in approximately eight weeks. Spring is almost here, and we look forward to another great season filled with lots of tears (onion tears, that is!)”

California/Brawley:
John Vlahandreas with Wada Farms told us that he visited the California growing operation last week, and things there look good. “The weather in the desert has been a little colder than normal, and there were some pretty good rains, but none of it has had an adverse effect on the crop,” he said. “The stands are where they should be, and it appears that there aren’t any noticeable disease, early weeds, or seeders, so those are good signs. As reported earlier, the acres are significantly down this season, so we anticipate that will help us when it comes time to market the crop.”

Thanks to John for sending the beautiful Brawley crop photos taken just last week, which includes this week’s Featured image. 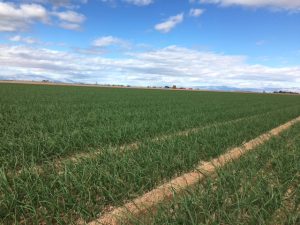 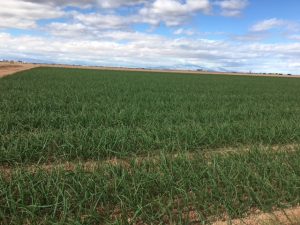 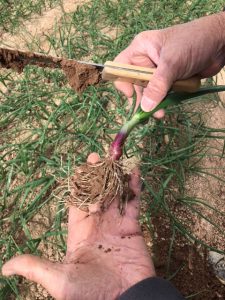 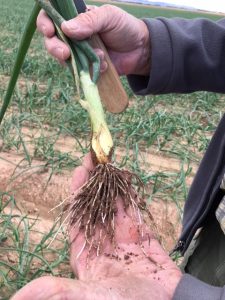