Market and Crop Update For February 15

MARKET
Idaho-Eastern Oregon:
Chris Woo with Baker & Murakami Produce/Potandon Produce in Ontario, OR, told us on Feb. 14, “Demand is moderate, and the market is somewhat steady this week.” He said that transportation “has eased up, trucks are readily available and freight rates have stabilized.” Chris also said, “Inventory of red and yellow onions in storage all sizes still very manageable and promotable. White onions for the region’s production are winding down for the season.” Looking at the rest of the season, he said, “Some sheds in Utah, Colorado and in this area are getting close to being done, but here at Baker & Murakami Produce we are the first shed to start and the last shed to finish. This year we have onions put away in cold storage to extend our season and accommodate customers wishing to stay with us for a longer period of time instead of hopping around to new crop.” And he added, “New crop Mexico shipments and pressure have not been felt yet. Their pricing remains high that customers continue to stay with us because of our competitive price structure and well as our fine quality.”

Mexico:
Don Ed Holmes with The Onion House in Weslaco, TX, told us cooler weather had slowed the arrival of onions from Mexico. “Mexico hasn’t had a lot of volume so far,” Don Ed said on Feb. 14. “It’s been so cool, but it is supposed to warm up with a change in the weather pattern.” Mexico had missed a lot of the really inclement weather, Don Ed said, but it’s been cool enough that volume coming into the U.S. hasn’t hit yet. “I believe by next week volume should have increased. And we’re getting our first whites this weekend, with more whites, reds and yellows on Monday. So we’re good to go.” He said the overall market “hasn’t responded very well, and I think it’s the mid-February doldrums.” He added, “Every year I say in mid-February that business just isn’t right – and I’ve done that for 42 years. You’d think I’d expect it.” Peru is winding down, he said, and Mexico is falling into a steady supply with increasing volume.

Northern Colorado:
Bob Sakata with Sakata Farms in Brighton told us Feb. 14 that the company’s onion season will wrap up in the next week. “Things are moving well today,” Bob said. “It’s been one of those years when we’ve really been blessed.” After more than 70 years of growing sweet corn, broccoli and cabbage in addition to its onions, the operation, now under sole ownership of Robert “R.T.” Sakata, son of Bob and Joanna, will be growing only onions, field corn and wheat. R.T. explained that the labor situation has prompted the company to make the decision to go to all-onion production. Sakata Farms is holding an auction Saturday, March 10, to sell its sweet corn line and other equipment.

Wisconsin:
Doug Bulgrin with Gumz Farms in Endeavor said on Feb. 14 that medium yellows were shipping well. “They’ve been steady, and pricing is also steady,” Doug said. “We’re hoping to see a price increase as other areas finish up.” Doug said Gumz is shipping all colors and sizes and will finish the 2017 crop in early May. He also said transportation has “been a little easier this week… gotta say something positive.”

New York:
Michelle Gurda with A. Gurda Produce in Pine Island told us on Feb. 14, that as of Valentine’s Day, “Medium reds and whites are moving the best right now.” She noted that demand since the first of the year has “remained steady,” and Michelle said A. Gurda still has a “fair supply remaining in storage right now.” The market on Wednesday was “flat right now,” she said, but she noted that freight costs “have come down a bit.”

Broker’s Perspective:
Jason Vee with Vee’s Marketing in Lake Nebagamon, WI, told us Feb. 14, “As a broker, I choose my words carefully regarding down-markets. Down-markets put shippers on edge. Neither of us likes bill-downs or downward price movement. But this week has been uninspiring. When it’s the week of the twos in January, or the last week of January, we expect it to be slow. So even if it’s pretty slow for that time, we can say it’s fair because it’s expected.” He added, “I expect at least slightly better demand than this by now.” And, he said, “Seems like a good time to be on vacation.” Jason noted volume is increasing in Texas. “Carton sweet movement is good for me. I haven’t loaded any whites, but I hear the quality is good.” The transportation issue, he said, is mixed. “Trucks in Washington have eased up quite a bit for me, but I’m still finding higher demand for Idaho and Eastern Oregon trucks.”

CROP
Arizona:
Paul Reeping with P.R. Sales based in Nampa told us his Litchfield, AZ, crop is right on schedule for the last week of April. “We have the same acreage,” he said, adding that P.R. Sales will have some reds and a few whites in addition to its yellows this year. “We try to get as many jumbos as we can,” he said, adding, “The crop looks good, and we’re looking at that last week of April to start.” The Litchfield deal runs about five weeks, going into the first week of June. Paul sent photos of the crop progress which includes a field planted with yellow, red, and white onions. 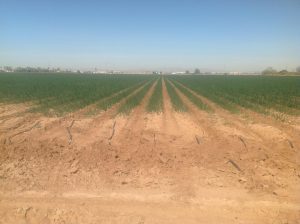 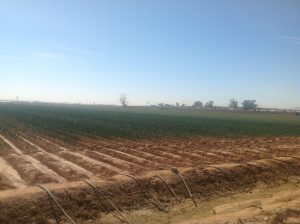 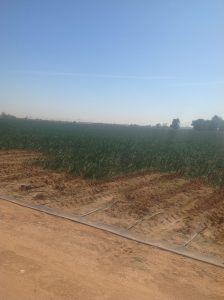 Idaho-Eastern Oregon:
Chris Woo with Potandon Produce/Baker & Murakami Produce in Ontario, OR, told us Feb. 14, “I had heard of some early onions being planted, although not many, on Feb. 2. Some others were going in yesterday. This is not the norm, and we usually plant the bulk of the crop in mid-March.” The area, Chris said, has had “a mild winter this year compared to last,” and he added, “The only snow we have had was four inches on Christmas Eve.” Nonetheless, he said, “Water storage in good shape for this year and next year’s crop.”

Northern Colorado:
Bob Sakata, a farmer with nearly three-quarters of a century experience to his credit, told us his son and Sakata Farms owner Robert is “ready to get out and plant again” and is just waiting on Mother Nature. “We’ll plant depending on the weather,” Bob said on Feb. 14. The operation will have 400 acres in onions to run through the Brighton facility, he said.

Texas Rio Grande Valley:
Don Ed Holmes with The Onion House in Weslaco told us that the 1015 stands are growing, and “as the temperatures get into the 70s and 80s, the onions will look a whole lot different.” Cooler weather slowed the onions somewhat, but Don Ed said a forecasted high of 59 for late in the week has been revised ever so slightly upward to the mid-80s. “The onions will start to take off later this month, during the month of March the crop makes itself.” He said he expects to start the season the first week of April, about two weeks later than normal, “which could be really good.”

Wisconsin:
Doug Bulgrin with Gumz Farms in Endeavor said planting the 2018 crop will begin in mid-April, with the shipping season to kick off in mid-August. He said there will be no changes in the program, with varieties and color mix staying the same.

New York:
Michelle Gurda with A. Gurda Produce in Pine Island told us Feb. 14 that weather in that region has been a mixed bag, but she said planting is a ways off yet. “We definitely have had some odd weather lately, but we are still a couple months away from planting,” Michelle said.