Market News
Wisconsin:
Doug Bulgrin with Gumz Farms in Endeavor told us Feb. 20 the market and pricing are steady there. He also described a “somewhat limited supply of medium yellows, adding that Gumz has been “receiving more cold calls looking for supply.”

Idaho-Eastern Oregon:
Steve Baker with Baker & Murakami Produce in Ontario, OR, said on Feb. 20, “Demand has been better this week than the previous two weeks for us,” and he added, “Medium yellows are a real tight item like they have been the last few months. White demand is very strong, and we’re getting a lot of calls from strangers looking for whites.” The market has been steady this week, and Steve commented, “We have good availability on all yellows except mediums. There’s good availability on jumbo reds and medium reds, and we have only a handful of whites left. Quality has been very good on all colors.” He noted that transportation “has not been a problem this week,” saying, “We are getting our loads covered.”

Herb Haun with Haun Packing in Weiser, ID, weighed in on Feb. 20, telling us, “The market has been pretty steady all week. Demand is good across the board, and we just finished with whites.” And transportation has been “OK,” he said. Herb said Haun Packing is looking to finish the season mid-March. And he said that’s around the same time the growers will get back in the fields. The 2019-2020 program will be close to that of last season, he said, noting, “We’ve been blessed in a lot of ways this year.”

Washington:
Trent Faulkner with L&M Companies in Raleigh, NC, told us on February 20 that the market is steady this week. “We were in a lull there for about a week due to the extreme cold in major cities like Chicago and New York,” Trent said. “People weren’t getting out to eat at restaurants so things had slowed down a bit, but it seems like things have evened out and demand has picked back up and the market has corrected itself. If you have medium or jumbo whites you are making good money right now. At least $30 FOB. Even with some whites crossing from Mexico there is still money to be made for those selling whites. The market for reds and yellows has been back and forth, but again it looks like it has stabilized this week. We have quite a few reds so we are working to move those.”

Mexico:
Don Ed Holmes with The Onion House in Weslaco, TX, said volume out of Mexico had picked up this week. “It’s at about 50 percent, and we should see it picking up more next week,” he said. “The white deal is still pretty good, and yellows have been mostly sweets. There’s been good action on reds, too.” Don Ed said the Tampico region of Mexico had been “totally unaffected by weather, which has been good for us.”

Trent Faulkner with L&M Companies in Raleigh, NC, told us that L&M is starting to see a few Mexico whites crossing that they will start marketing. “Since we don’t have much to do with the growing down there, we don’t know the volume,” Trent said. “But we are starting to see some whites crossing. We anticipate we will start getting some reds and yellows, but we really don’t know exactly when that will be.”

Crop Update
Texas Rio Grande Valley:
Don Ed Holmes with The Onion House in Weslaco said on Feb. 20 that the South Texas crop looks good. “It’s been a very cool February here,” he said. The average temperature in February generally runs in the mid-70s, and Don Ed said there have been days when the highs have run low to mid-50s. “We’ve had a lot of temperatures at or below average, and the onions won’t be early,” he said. “But the crop looks good, and we’re looking for a normal start the last week of March or early April.”

New Mexico:
James Johnson with Carzalia Valley Produce in Columbus told us Feb. 20, “It’s cold.” He added, “We’ve had more weather in February than we did in December, and it’s definitely slowing the emergence of spring seeded. The low this morning was 17. Not a lot is going to happen this week.” However, he continued, “We started planting transplants today. And we’re on track for timing and won’t change our harvest dates. We’re still looking to start the third or fourth week of May.” James also commented on the increase in New Mexico’s minimum wage set to go into effect in June, raising the wage from $7.50 to $10. “We have a short season, and it’s hard to implement a lot of automation,” he said.

Trent Faulkner with L&M Companies in Raleigh, NC, said that operation is looking forward to marketing Deming, NM, onions through its collaboration with Young Guns when the spring season kicks off.

California Calipatria:
Trent Faulkner with L&M Companies in Raleigh, NC, said that the Calipatria crop is progressing well. “We are headed out there on Monday so we will be able to see the fields first-hand,” Trent said. “But we do understand that the crop is growing nicely. I will be able to share some photos when I return from our trip.”

Vidalia:
Danny Ray with Ray Farms in Glennville, GA, sent us these awesome photos of the family’s Vidalia fields on Feb. 20. “The weather is getting warmer, and the crop is really starting to take off,” Danny said. “Everything looks good right now.” 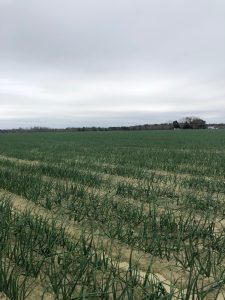 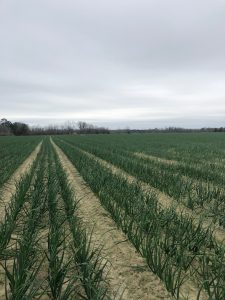 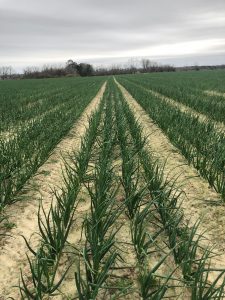