Market and Crop Update for February 8

MARKET
Michigan:
Jon Meyer with Market Brothers in Michigan reported demand is slower this week. “Demand has been a little slow for the last several weeks, but the market has been steady,” he said. “Transportation has eased up some as well.” Jon said quality has been very good this season, and he noted, “We are getting shorter on reds, but we have adequate supplies of yellows.” He said Market Brothers should be finishing up with Michigan supplies sometime during the first couple of weeks in March.

Idaho-Eastern Oregon:
Trevor Frahm with Frahm Fresh Produce in Ontario, OR, told us Feb. 7 demand is normal for this time of year. “Demand generally slows up this time of year,” he said. “That said, demand seems to be up a little over past years. We anticipate demand will increase next week, and we’ll be feeling the love for Valentine’s Day.” Trevor added that the market is holding. “We are still seeing quite a bit of requests for the larger onions, and we have availability in all sizes of yellows and reds but are out of whites for the season. And our quality is really good,” he noted. 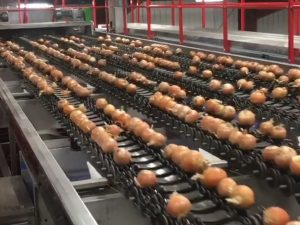 Bernie Pavlock with Prosource Produce in Hailey, ID, reported on Feb. 7 that demand has been steady this week. “We are running full days, so demand is pretty good,” he said. “It looks like we will be finishing up with whites in the next week to 10 days. Whites are starting to cross from Mexico, so it will be interesting to see how that goes over the next several weeks.” Bernie said that the Golden West facility is bringing onions out of refrigerated storages. “Part of the Golden West rebuild included large refrigerated storages, so we are happy to be able to ship onions out of those buildings,” he said. “We have been operating our of our new facility for about four months now, and things are going very well. We are having a great time figuring out a bunch of new toys. Compared to everything we went through in 2017, we are very excited about
2018.” View more shed and onion photos at @prosourceproduce Instagram-Click Here.

Dan Phillips with Central Produce Distributor in Payette, ID, said his operation is on schedule to ship through the end of March or into early April. He noted all colors and sizes are moving well this week, and he said, “Demand is decent, and the market and pricing are steady.” Dan said transportation continues to be an issue. “We’re struggling with trucks and with rail,” he said.

Mexico:
Don Ed Holmes with The Onion House in Weslaco, TX, told us on Feb. 7 that Mexico’s jumbo deal “is substantially better than the mediums,” and he noted cooler weather had volume moving at a somewhat slower pace. “It was a little slower at the beginning, although we’ve had onions right along. But we expect volume to increase around Feb. 15.”

California Five Points:
Mike Smythe with Telesis Onion told us that in Five Points this off season, “Telesis Onion hired Exeter Engineering, and we are making changes to the line, eliminating drops and making the line more efficient.” Mike said in the field, “Acreage is the same, and we expect a late May start-up.”

Idaho-Eastern Oregon:
Trevor Frahm with Frahm Fresh Produce in Ontario, OR, said on Feb. 7 the farm will start planting soon. “We are going to plant a few early onions next week,” he said. “This is the earliest we have ever planted, and actually we could start planting now if we wanted, but we are going to hold off another week.” Trevor said that Frahm Fresh will maintain the same program as last year. “Even if we don’t get any more runoff this year, there is plenty of carryover water in the all of the reservoirs for the season,” he said regarding irrigation for the 2018 crop.

Dan Phillips with Central Distributor Inc. in Payette, ID, said while it’s early for growers to get in the fields, “The weather is definitely teasing the farmers around here. I don’t really know when we’ll get in the fields, but if the weather keeps up like it’s been, it might be a bit early. It normally depends on where you are in the Treasure Valley – some guys can get in the fields in February, but most of us are in during March. Right now the fields are drying out, but it could rain tonight. It’s just early to say.” Dan said Central will be building a new facility this season at the Payette location, and he said, “We’re putting up the new building first, and our long-term plan is for a new line.”

Texas Rio Grande Valley:
Don Ed Holmes with The Onion House in Weslaco said cooler temps in his area have slowed the 2018 1015 crop slightly “We’re wearing long sleeve shirts today, and the high is in the 50s,” he said on Feb. 7. Don Ed said temps had been in that 50-degree range in recent days, but he added that the onions are doing “fine.” He said, “It might make them a little later, but we always want IEO and guys out west to have the chance to finish up. Right now we’re down to watching the crop pretty close, and we just need a few heat units for the onions to size up.” He said he expects to start volume “right around Feb. 15,” and he added that “everything looks really good.”

Texas/Mexico:
Jon Meyer with Market Brothers reported from Michigan that Market Brothers Texas/Mexico program should start full steam sometime during the first couple of weeks in March. “There are some shipping out of Mexico now,” he said. “But we will really get going shipping out of the Weslaco and McAllen area in the first part of March.” He said the Southern growers have had a good growing season, and the crop looks very nice.

New Mexico:
Bernie Pavlock with Prosource Produce in Hailey, ID, told us the 2018 crop for Rio Valley Onion in Hatch/Rincon, NM, is coming along nicely. “We are looking at mid-May for harvest,” he said. “This will be the second year operating out of the new facility, and over the off season additional improvements have been made. We are excited about how New Mexico is looking and running out of that great facility for the 2018 season.”

James Johnson at Carzalia Valley in Columbus told us Feb 7, “Our spring-seeded crop is all in, sprouted and roughly 20 percent emerged. Conditions have been good the last two weeks to bring them up. The fall seeded crop is still dormant but showing signs of waking up; we should freeze tonight which will be welcome to keep them asleep for a bit longer.” James added, “Carzalia is on target for the third week of May harvest.”

He has sent a couple of photos of the earliest fall seeded field. 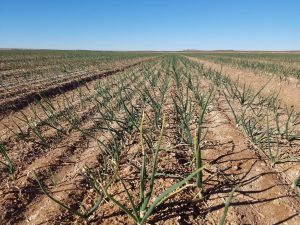