MARKET
General Overview:
Dan Borer with Keystone Fruit Marketing in Walla Walla, WA, provided us with a general overview of the current demand and market situation for onions. “After our NOA meeting in December and hearing the reports from growers and shippers, it appears that earlier information on global demand has some validity,” Dan said. “With increased demand for exports to Europe and with the Mexican importers currently looking for onions too, there appears to be some good opportunity here. Since the first of the year, we have seen an uptick in the market. While some say it could be due to less shipping days during the holidays and pipelines being somewhat empty, the indicators suggest that the market could be getting stronger. In the spring, the market relies heavily on U.S. consumption, and it looks like there could be a reduction in planting for some regions – and we know that Mexico is a little late –all positive factors for the market. As far as Keystone goes, we are in a very good transition period for sweets. We will be receiving the last of our shipments from Peru at the end of January, which will carry us through into February and early March when we will be ready to transition to new crop.”

Washington:
Brenden Kent with Sunset Produce Company in Prosser told us on Jan. 9 that demand has remained strong after the holidays. “Of course, demand is high on whites since they are fairly scarce, but yellow demand is also very strong, and reds are steady,” Brenden said. “The market has become stronger, and we see an upside potential moving forward. The Asian exports have dropped a little this week, but that is typical for this time of year. We hear that Taiwan’s onion season is finishing up, and so we expect shipments to pick back up there in the coming weeks.” Brenden said quality remains good. “The quality is holding up well, and we’ve been happy with what we are packing,” he said. “Right now, we are managing our storages to make sure that we have the onions for our program business and keep our customers happy. We expect that we will have the supplies necessary to complete the season within our normal timeframe.”

Idaho-Eastern Oregon:
Jason Pearson with Eagle Eye Produce in Nyssa, OR, reported on Jan. 9 that this week’s demand is “GREAT!” He said, “Though we are completely out of whites, demand has been very good on yellows and remaining steady on reds. The market is on a positive upswing, and I see that continuing in the foreseeable future.” Jason said that Eagle Eye is shipping all sizes in yellows and reds, and the quality continues to be “excellent.” Jason also said, “Transportation has been pretty good, and we haven’t had much trouble getting trucks this week.”

Dan Phillips with Central Produce Distributing in Payette, ID, told us on Jan. 9 that demand is “very good” this week. “We are crazy busy,” Dan said. “Like most shippers, we are out of whites, but we are moving all sizes in yellows and reds. We are much happier with the market too. With the increase, it makes the environment exciting again. We are hoping our growers can make up in the second half of the season what they lost in the first half. And the outlook is good too. There are so many factors that indicate the increased market will continue. Canada and New York are less of a factor on jumbos, and though it’s hard to get a lot of information, it looks like Mexico may be late, too. So we are encouraged moving forward. All we can hope is that everyone can hold it up.” Transportation-wise, Dan said that though not drastic, trucks have been a little easier to get this week.

Utah:
Don Ed Holmes with The Onion House in Weslaco, TX, said on Jan. 9 his Corinne, UT, deal is rocking along at a good pace. “The truck deal is straightening itself out, movement is good and prices are definitely better,” Don Ed said. He noted that he’s out of whites, adding, “Reds and yellows are getting better. It feels good, and right now I think we’re on track to finish in February.”

Broker’s Perspective:
Rick Greener with Greener Produce in Ketchum ID, reported that he is loading fewer trucks this week. “It’s really interesting. The market has increased sharply, and I have some buyers resisting to the increase, saying that they pre-loaded knowing this would happen, or they are going to wait it out,” Rick said. “The thing is, the growers deserve a decent return, and every day we are getting kicked in the teeth on pricing. I know it’s hard, but we as an industry have to keep this market up. And the situation is a good one. There are more exports moving, and it makes sense for the increase, but the market has really jumped, and there are people out there hanging on what they were paying 10 days ago. For us, the situation is a positive one. We are shipping fantastic quality out of Washington, Idaho, Oregon and Utah, and we are getting repeat customers with consistent loads – and we’re happy about that.”

CROP
Texas/Mexico
Mike Davis with Tex-Mex Sales LLC in Weslaco, TX, took time out of his busy day in the fields to visit with us about the Texas Rio Grande Valley and Mexico crops. “From what I have seen in photos and reports from the growers, I think Mexico’s crop is looking good,” Mike said. “I expect we’ll start shipping all sizes and colors and some sweets around the first part of February. In the valley, our weather has turned around and it’s been really pretty nice. I would say we should be able to start shipping our Texas crop around the 15th to the 20th of March.”

Mexico:
Don Ed Holmes with The Onion House in Weslaco, TX, said on Jan. 9 he’s expecting “a few sweets on Jan. 25” from the Tampico-area crop, and he said whites and reds will start coming in during the first 10 days in February. “I don’t think we’ll see any volume until about mid-February,” Don Ed said. He noted that acreage is down for the region this year.

Texas Rio Grande Valley:
Don Ed Holmes with The Onion House in Weslaco said on Jan. 9 the Rio Grande Valley crop is looking great right now, adding, “Every onion came up.” He said temps have been good, noting, “It’s cooled off to 68 today with a nice breeze. The crop looks really good – it had light moisture as the onions were coming up, and everything is beautiful. Acreage is down, but the stands are gorgeous,” he said. “We’re looking at the last week of March to start.”

New Zealand:
Our friend Robert Bell with Western Onions in Camarillo, CA, provided us with a New Zealand update this week, noting that rain stopped after Pukekohe received more than 205 mm in December. The weather, according to Robert’s source, had improved and the region had experienced a week of great conditions. Early onions were down and being lifted for curing. The report said, “Sizing is bolder than we thought pre-Christmas,” and “Harvest should commence in seven to 10 days into storage.” 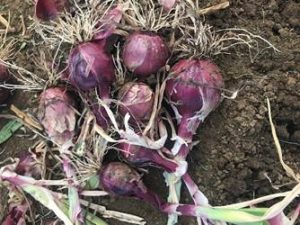 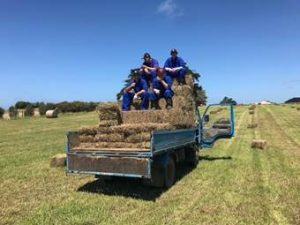