Market and Crop Update for January 18

MARKET
It’s been a bit quiet this week for regional market updates, with many of our contacts citing demand that is steady but down from the holiday pull. We’re also hearing that transportation remains tight is some areas. Additionally, many shippers/sales staff are traveling at this time; safe travels, everyone.

One exception to the trend, however, is being reported in the Great Lakes area.

Wisconsin:
Doug Bulgrin at Gumz Farms in Endeavor reported on Jan. 17 that demand is strong this week. “We have been very busy,” he said. “In addition to our regular business, we have been covering some loads that have not been able to be delivered from the West.” Doug said the market is steady, and transportation isn’t as big of an issue for Gumz as it is for other shippers. “We may have it a little better than some,” he said. “We have some really solid transportation relationships, so that helps.” Doug also said Gumz has a good supply of medium and jumbo yellows. “This year it’s been good because we have more jumbo yellows than normal, and jumbo yellows are moving well.” He noted that Gumz will be sharing information about modifications soon, and OnionBusiness.com looks forward to covering the exciting news.

Northern Colorado:
Bob Sakata at Sakata Farms in Brighton told us on Jan. 17 that business has been good for his operation as well. “We’re doing fine,” Bob said. “We’re about 75 percent done with the season, and the market is good.” He said Sakata Farms will ship into February, and he noted quality is very good. “Transportation is not as bad here as other places,” he said. “Fortunately here in Denver our customers are sending their own trucks, and so we’re doing good.”

Utah:
Don Ed Holmes with The Onion House in Weslaco, TX, said his Utah deal has about two more weeks, likely ending in late January or early February. “Movement is still good,” he said on Jan. 17. He added that Western Colorado is “all in and all done, and we’re all happy.”

Idaho-Eastern Oregon:
Steve Baker with Baker & Murakami Produce in Ontario, OR, told us on Jan. 17 that demand “is down somewhat from last week,” but he added, “It is not unusual for demand to slow down when we approach the Jan. 20 time frame. Also transportation continues to be tight both by rail and truck. This, too, is contributing to slower movement than we would like to see.” Steve said demand remains better on the larger sizes, jumbos and colossals, rather than the mediums. “We have good availability on yellows and reds,” he said. “Whites we are selling in pallet volume, no straight loads.” And he added, “Quality is very good.” Steve said the market is “steady so far this week,” and he concluded, “Transportation continues to be an everyday challenge. Getting trucks at times is a bidding war. Railcar availability has never been this tight for this long. Hard to service your rail customers when you have no idea in advance when you will have cars.”

Nevada:
Cindy Elrod with Peri and Sons of Yerington said it’s been a “fairly dry winter” in Nevada, and she noted that planting “should commence in March.” Cindy said, “We’ll finish packing storage crop by mid- to late March. Pricing and movement has been good all season.”

Washington:
Larry Denke with Agri-Pack in Pasco said that the market had slowed since the holiday pull. “We’ve slowed down,” he said. “There are still a lot of mediums on the market.” Larry said Agri-Pack plans to ship through the end of March. “We want to make it to the Easter pull,” he said. “That’s the goal.”

Oregon:
Trish Lovell with Curry and Co. in Brooks said, “It seems to be an average January week here in Brooks,” with what she called “steady demand, nothing crazy.” Trish said, “Prices have remained the same, and truck availability is better for us here on the west side [of the state].” When asked about transportation regulations, Trish said, “There is no doubt this ELD situation is going to continue to affect our industry.”

Mexico:
Don Ed Holmes with The Onion House in Weslaco, TX, said on Jan. 17 his company will start moving light volume of sweet onions from Mexico the middle of next week. “About a week after that we’ll start whites, and then another week later we’ll start reds,” he said. “All’s looking good.”

Broker’s Perspective:
Jason Vee with Vee’s Marketing in Nebagamon, WI, provided us with his unique look at current market conditions. He said, “I see Mexican crossings happening this week, and volume increasing next week. Considering how difficult and expensive trucks are right now, it should be an easier sell to switch eastern states over to Mexican product than it has been in recent years strictly by freight advantage. That will affect 40# carton sweet business coming from the Northwest.” Jason added, “Prices this high and demand still this strong in the middle of January is a very robust sign that the Northwest finishes strongly this year. The small profile and lower yield of onions harvested this season reinforces that thought.” About the ongoing transportation issue, Jason said, “Mixer business is my bread and butter, but I had to set a pallet minimum since the implementation of ELD. The difficulty of getting trucks to accept multiple picks and drops is too high to deliver two pallets at a time, at least right now. The demand to service the two-pallet customer struggling with freight costs should be an opportunity for growth in distribution centers and large wholesalers.

CROP
California Imperial Valley:
Cindy Elrod with Peri and Sons said the “weather to date has been good, stands are good, and if conditions stay the same, it looks like things could mature early.”

California San Joaquin Valley:
Cindy Elrod with Peri and Sons of Yerington, NV, said the San Joaquin Valley has had a “fairly dry winter.” She said, “Planting is on schedule. Short days and intermediates are planted, and long days will be planted in a few weeks.” She added, “The water situations look good for now.”

Robert Bell with Western Growers in Camarillo reported on Jan. 17 the Coalinga region of the San Joaquin Valley had gotten about 1.25 inches of rain last week, and because of the “Thule fog” the ground wasn’t drying out. Thule fog is a term used referring to ground fog, and Robert said growers are waiting for those conditions to abate so they can get in the fields with applications. “They haven’t been able to use herbicide yet and are waiting for a break in the weather,” he said. The area’s early onions will come off in June, he noted. Thank you to Robert Bell for sending the photos shown below. 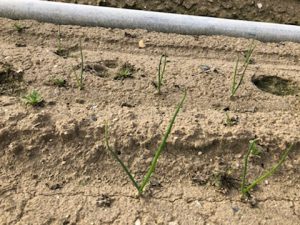 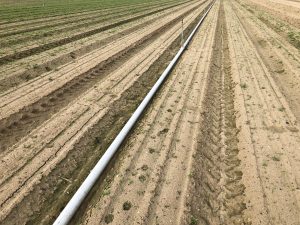 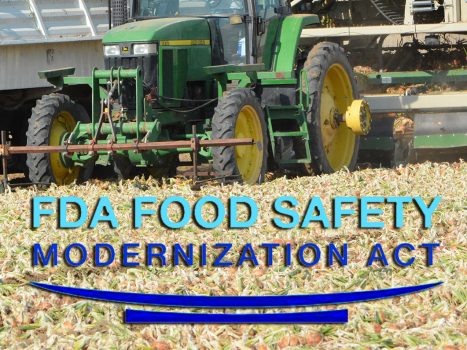 FSMA Training Class scheduled for Feb. 23 in Ontario, OR