Market and Crop Update for January 4

Oregon:
Trish Lovell with Curry and Co. in Brooks, OR, said on Jan. 3 her office had “stayed very busy here at Curry,” adding that “demand has been very good and supplies have been tight due to overall demand.” Trish said she had not felt much price increase, and she said, “I believe the market has stayed at the current prices due to transportation.”

1-4-2018 Updated 9:23 a.m. MST: OnionBusiness.com is receiving updates this morning on pricing. From Trish Lovell at Curry and Co. in Brooks, OR, we heard, “I am seeing the market prices going up. In talking with other shippers, getting overwhelmed with inquiries for product. Shippers are raising their prices.” Thanks, Trish, for keeping us current. We welcome any and all updates.

Idaho-Eastern Oregon:
Steve Baker with Baker & Murakami Produce in Ontario, OR, told us Jan. 3 that demand has been good. “We had a lot of business on the books from orders placed the end of last week and yesterday, but it’s too early to tell how the rest of the week will shake out.” Steve said, “Transportation, both trucks and rail, is curtailing movement. We could sell more if we had the transportation” He said the market has been steady, and he described available as good on yellows and reds and “whites are a little tight.” Steve said whites are moving in mixers.

Dan Phillips with Central Produce Distributors in Payette, ID, told us this week demand is high. “We have a ton of orders,” Dan said. “The issue is getting trucks to move them. Add to it the lack of rail cars, and the movement has nearly slowed to a halt.” Dan noted that the lack of trucks and rail shouldn’t be confused with any weakening in the market. “The market is still very, very strong,” he said. “In fact, if it weren’t for the extra dollars going to the freight this week, there would be a push upward. We anticipate that the push is going to happen once truck availability opens up sometime the end of next week or a little later,” he added. Dan said despite the transportation woes, things are positive for the new year at Central. “Quality is absolutely exceptional,” Dan said. “Reds, whites, and yellows alike are some of the best I’ve seen, and we are all looking forward to a great 2018.”

Idaho-Eastern Oregon/Utah/Washington/Colorado:
Bob Meek with Onions 52 in Syracuse, UT, said his operation is “shipping hard out of Washington, Nyssa and two sheds in Utah.” Bob said two of O52’s Colorado sheds are finished, and the third will be done by mid-January. He said the rollout of the new tearless Sunions has begun to a specified number of retailers. “The first shipments are going out this week,” he said. The Sunions are going to the Northwest, Utah, Texas the Midwest, and Bob said supplies will go about three months.

Western Colorado/Utah:
Don Ed Holmes with The Onion House in Weslaco, TX, said on Jan. 3 that he’s still moving onions out of Western Colorado and Utah, going “a little longer due to trucks being tight.” He said he has another two weeks for Colorado “and a little longer for Utah,” adding that “quality and demand are both very good.” He said, “We’ve got excellent business and have quite a few onions going out today. Utah’s going through the end of the month, and overall we’re in really good shape.”

Mexico:
Bob Meek with Onions 52 in Syracuse, UT, said his company was moving early onions out of Mexico now. “We’ve started shipping a few loads a day. We’re not shipping big amounts, but that train’s coming.” Bob said it’s whites moving now, and he said quality is very good. “Reds and yellows will start toward the end of the month,” he said, adding, “I foresee strong markets for Mexico onions will be a welcome relief. We and others will have our U.S. sheds running low on supplies.”

New York:
Michelle Gurda with Gurda Produce in Pine Island NY reported on January 3 that this week’s demand and market are both steady. “We haven’t seen much change,” Michelle said. “If anything, it’s just leveled off.” She said Pine Island saw 4 degrees the morning of the Jan. 3. “It’s definitely cold, but we are keeping an eye on everything,” Michelle said. “We’re very careful to keep doors shut and the weather out, so as long as we do that, there isn’t any concern about the cold weather.” She said quality and supplies are good, noting that Gurda ships organics as well as conventional.

Broker’s Perspective:
Jason Vee with Vee’s Marketing in Lake Nebagamon, WI, told us on Jan. 3, “I’m not experiencing any market changes. Demand is fair. Production is limited by the two holidays, so that makes demand feel a little stronger, artificially. I had downplayed the struggles in trucking lately, but that caught up with me full force last week. I always say that if I’m busy on a Friday, it’s probably because I screwed something up. I did not have enough trucks last week. If I don’t book enough trucks and end up short a truck at the end of the week, I can usually pay my way out of it. It’s not ideal, but sometimes integrity is expensive.”

Texas Rio Grande Valley:
Don Ed Holmes with The Onion House in Weslaco said the RVG crop is doing just fine. “It’s dormant, and nothing has bulbed,” he said, noting recent cold hasn’t adversely affected the onions. “It’ll come back to life in January and come off in late March or early April,” he said.

Mexico:
Don Ed Holmes with The Onion House in Weslaco, TX, said his Mexican crop had slowed slightly with the recent cooler weather. “It’s slowed just a little,” he said. “We’re looking at Jan. 20-25 to start, and those will be sweets. I think it’ll be close to the end of the month or early February before we get going.”

Georgia:
OnionBusiness.com caught up with Danny Ray with Ray Farms in Glennville, GA, on Jan. 3, as his grandchildren were suiting up to play in some rarely seen snow. Danny reported that a recent storm dumped five to six inches, but he noted that crops haven’t suffered. “We are still on track for a mid-April harvest,” he said. “The snowstorm could set us back a few days, but we won’t really know until the season progresses. And it’s been my experience that a little snow actually helps the onions.” Danny said the weather is expected to turn around and hit the 60s next week. “The stands are looking good and the crop looks healthy, so we feel like we are in a good place right now.” 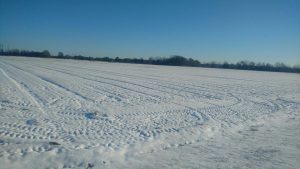 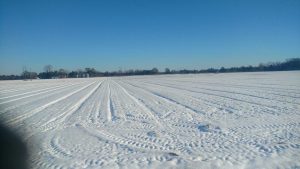