MARKET
California Five Points and Washington:
Onion Business visited with John Vlahandreas on July 1 as he was tying this up for the holiday weekend. “Basically, the week is over for sales because of the holiday,” John said. “Sales have been good though, and we are currently moving onions out of California and overwinterings out of the Pasco, WA, area.” He added, “Onion availability has been a little tight, and we have had little gaps here and there, but the quality has been good, and the market seems to be edging up a little. We should be finishing up in California in the middle of August, about the time that direct seed out of Washington gets going.” On transportation, John said that trucks are tight. “Getting trucks has been difficult, but I chalk it up to the holiday.”

California Central and New Mexico:
Trent Faulkner with L&M Cos. in Raleigh, NC, reported to us on July 1 that demand is very good this week. “We are shipping out of Billy the Kid’s operation in New Mexico and started shipping out of Bakersfield, CA, last week,” Trent said. “In Bakersfield, we moved our operation up from Calipatria, so we had to get the kinks all worked out, and things are running smoothly there. Demand is exceptionally good, and the market has been edging up as well. Most other areas are depleted, and California and New Mexico are where the onions are coming from now, so the market is moving upward.” He continued, “Mediums were the hot item, but we are definitely getting more demand for the larger sizes in yellows and reds. Buyers are starting to look for jumbo and colossal yellows and jumbo reds. Quality out of both sheds is very good now, and our growers are giving us great quality to work with.” Trent said, “We are running the same varieties out of both sheds, so the product is pretty consistent for us. It seems like some of the other sheds have had gaps in shipments, but we have been blessed not to have any gaps which has helped.” On the transportation side of things, Trent said trucks are tight. “The COVID ELD exceptions have expired, and so we are seeing that reflected in getting trucks,” he said. “It’s not terrible, but we are seeing some minor delays in pick-ups.”

Idaho:
Onion Business caught up with Rick Greener with Greener Produce in Ketchum on July 1. “Things are going well this week,” he said. “Last week was awesome, and we are about sold out for this week. People are checking out, and basically this week is done. It looks like we could run up against a four-day holiday.” He added, “There are sheds done packing for the week, and buyers are checking out too, and I’m thinking, ‘Wait a minute. Haven’t you guys just had a four-month break with this COVID thing?’ At any rate, we are seeing good demand, and the market has been good too.” Rick said he is moving onions out of California and New Mexico and also moving some overwinters out of Washington. “Though New Mexico is having a bit of slow start, right now is the best time for summer onion quality,” he said. “There is plenty of demand for mediums, and they are extremely tight. The funny thing is, this USDA box program deal is taking up what we could be moving the most of. It might be a price thing, but I really don’t understand why they couldn’t be putting colossals in those boxes. The program was supposed to help growers move product, and when we have no problem moving mediums, why not use more of what growers are having trouble moving?” He continued, “And that said, I really have no idea why medium pricing isn’t higher. Given the supply and demand, prices should be up around $30.” On transportation, Rick said it’s rough. “With the heat in Cali, we have to use reefers, and that ties up trucks,” he said. “Then, trucks are light picking up in New Mexico. On top of that, trucks are getting tied up with watermelon and other produce for the July 4th holiday weekend. In addition to that, there are plenty of truckers that don’t want to deliver in major cities. You know there are plenty of people that remember that poor trucker that got nearly beaten to death during the Rodney King/LA Riot deal, and who wants to be a victim of that type of violence?” Rick added that his firm is looking forward to the new crop. “Boy, we can’t wait to get started with the new crop coming on later this summer,” he said. “We always enjoy it when that onion season gets going.”

Vidalia:
Danny Ray with Ray Farms, Inc. told us on July 1 that his company has about three more weeks of shipping. “We are down to a handful of reds, but nothing to say that we have any availability left,” Danny said. “We are still shipping Vidalias for about three more weeks, and demand has been good. Really, we have had great demand, great quality, and great prices during our entire season.” He went on to say, “The good Lord has sure blessed us. We have as good a crop as we’ve ever had this year. Some Vidalia folks have been done for a couple of weeks now, and I’ve heard talk of some making the transition to Peru already. Still, we have shipped all that we wanted each week, and there are only so many we can ship each week when we are bringing them out of storage. I’ve never done this before, but we are going to stop packing on Friday and Saturday for the holiday.” View the great photos for Danny Ray’s operation.

CROP
Idaho-E. Oregon:
Grant Kitamura with Baker & Murakami Produce in Ontario, OR, reported on July 1 that the new crop is growing well. “The crop is progressing well,” he said. “We had the wettest June in recent history, but it hasn’t hurt the crop at all. Planting was done within the appropriate timeframes, so the precip hasn’t had a negative effect. So far, so good, and we are on track for a normal harvest.” 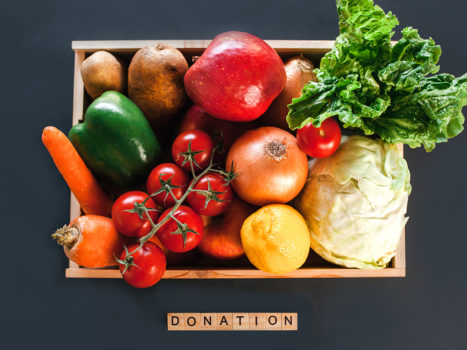 Farmers to Families Food Box program to run through August