Market and Crop Update for June 15

California/Five Points:
Mike Smythe with Telesis Onion Co. in Five Points, CA, reported on June 14 that demand has been strong and the market is firming up. “We have availability across the board for colors and sizes, and we have been very busy,” Mike said. “The quality has also been very good.” Mike also commented on receiver issues, saying, “Industry wide, we shippers are getting rejections based on photos of 5-10 onions. It is very frustrating when they grade U.S. No. 1s and a receiver rejects loads based on a couple of photographs. The industry as a whole needs to address this issue.” Mike continued, “In my opinion, it has gotten totally out of hand. Shippers and receivers need to work more closely together, because this photograph thing of a small number of onions used as a means for rejection hurts the entire industry.”

California Bakersfield/Five Points:
Nick Beahm with Eagle Eye Produce in Idaho Falls, ID, told us on June 14 that movement has been steady. “We have good demand and good supply coming out of the area,” Nick said. He added, “We are tight on mediums.” Nick described the market as steady and said shipments are on track. “It looks like we will be shipping consistently out of California until we transition up to Idaho-Oregon,” he said.

Oregon:
Stefan Matheny with River Point Farms in Hermiston, OR, said River Point will start harvesting its overwintering onions next week and will begin shipments between the June 23 and 26. “We have had some cooler and wet weather, but our overwinterings are sizing up nicely, and we are happy with the quality,” he said.

New Mexico:
Nick Beahm with Eagle Eye Produce in Idaho Falls, ID, said the quality of the New Mexico crop is excellent. “We have a lot of big onions,” he said. “We are shipping a lot supers, colossals, and jumbos. We do have all sizes available, but like California, we are a little tight on mediums.” Nick said that market is steady this week.

T.J. Runyan with Mesilla Valley Produce in Las Cruces, NM, reported that demand is very good this week. “The action is very good this week, and we are optimistic that the market will follow,” he said. “We have a high demand for mediums and the smaller onions, and usually when you have one size that is really hot, the demand for the larger sizes will pick up too.” T.J. said the quality has been excellent, noting, “We are very happy with our quality, and our customers have been happy as well.”

New York:
Michelle Gurda with A. Gurda Produce in Pine Island said on June 14 that demand and market this week are steady, with whites, medium reds and medium yellows running stronger than other sizes. “Bigger sizes are being produced right now, so there are fewer mediums available,” she said. She added that availability is good now from Gurda.

Oregon:
Stefan Matheny with River Point Farms in Hermiston, OR, told us transplant and direct seeded onions are coming along well. “The weather had been cooler, and we had some rain, but it crop is catching up with the warmer weather we have been having recently,” he said. Stefan said the crop looks to be of average size and tonnage this season.

Idaho-Eastern Oregon:
Nick Beahm with Eagle Eye Produce in Idaho Falls, ID, said the IEO that crop progress is uneven. “It is really a mixed bag here,” he said. “With all the strange weather we’ve had, who knows what we are going to end up with. Right now, you can drive some of the fields and it looks pretty bleak, but time will tell.” 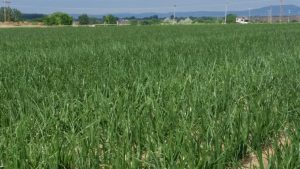 Grant Kitamura with Murakami Produce Co., LLC (now Baker & Murakami Produce Co.) in Ontario, OR, said the early IEO onions are healthy and doing very well. “As an area, we are behind schedule on our storage varieties,” Grant said. “We are seeing quite a bit of variation in the progress of the fields. Onions need warm weather and we are expecting that. At this point, all we can do is wait and see what the summer brings and hope for the best.”

Northern Colorado:
Robert Sakata with Sakata Farms in Brighton told us on June 12, “The onion crop in our area is extremely variable. Where we have the Colorado State University Extension variety trial is the best crop I have ever seen (I hope I don’t jinx it with that statement!). It is way ahead of schedule entering the seven-leaf stage. And we have another field that had been hit by the early bad weather (hail and freeze) that we decide to replant, and it is barely at the late one-leaf to early two-leaf stage.” Robert, who will be one of the leaders at the upcoming CPS Symposium in Denver next week, added, “Water supplies look good in Colorado as May increased the snowpack in most of the Rocky Mountains. We have started to irrigate most of the onion fields as we have finally warmed up to the 90s.” 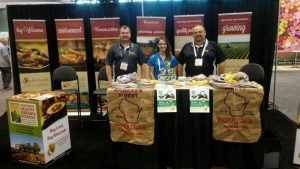 Wisconsin:
Doug Bulgrin with Gumz Farms in Endeavor, WI, was reporting from the United Fresh Expo in Chicago where the Gumz team was assisting with the promotion in the Wisconsin Ag. booth. Doug said that they had rain early on, but the crop is progressing nicely. “Everything looks really nice, and the weather has been good lately,” Doug said. Doug reports that so far it looks like it will be a normal crop for the Gumz season.

New York:
Michelle Gurda with A. Gurda Produce in Pine Island, NY, reported the crops “are looking good right now, and the weather is good, too.” (see featured Market and Crop photo supplied by Michelle)

Photo Galleries of the Week, June 15