Market and Crop Update for June 8

California Bakersfield:
Dan Borer with Keystone Fruit Marketing in Walla Walla, WA, reports that Keystone is shipping sweets out of California. “We have finished up with the Imperial Valley and are now moving north into Bakersfield and the Central Valley,” Dan said. “Supply is adequate, and the onions have good quality too.”

California San Joaquin Valley:
Cindy Elrod with Peri and Sons Yerington, NV, said harvesting continues in the San Joaquin Valley with short day varieties. “We are packing in Firebaugh and will be packing all colors by next week,” she said. “Size is mixed but seems to be on the smaller side right now.” She said size should increase “once we move into fields that will be harvested mid-month.” Cindy said she is expecting a gap to develop “as we approach the end of the month and transition from short day varieties to intermediates.” She added, “There have been more challenges this season than in the past few years. Market conditions are not as favorable, and keeping seasonal laborers committed and on the job has been a daily effort.”

Steve Baker with Baker Packing in Ontario, OR, said his company’s San Joaquin deal is seeing “fairly good” demand this week. “Buyers are looking to make the transition from Imperial Valley,” Steve said. He added that jumbo yellow “has been the most requested item,” and the market as of June 7 “is steady.” Steve said, “We have good availability on yellows, and we have limited supply of reds this week. We’re expecting to increase volume on reds in the upcoming weeks.”

New Mexico:
Chris Franzoy with Young Guns Produce in Las Cruces told us on June 7 that Arizona cleaned up, and Young Guns is now harvesting on its New Mexico farms. “Quality is good on all colors,” he said. “We’ve got a good mix of sizes coming through, and weather has been very good. We’ve been blessed. Just wish the market would get a little stronger. But demand seems to have picked up, and as other areas finish, more business is coming here to New Mexico. We’ll ship through August.”

Eagle Pass, Texas:
David DeBerry with Southwest Onion Growers said the Eagle Pass deal “was great, and we harvested every acre.” Final shipments were going out, and he said, “We have been very happy. Production was above average, and we just finished in early June.”

Vidalia:
Dan Borer with Keystone Fruit Marketing in Walla Walla, WA, reported on June 7 that shippers have finished fresh shipments and are now pulling out of cold storage. “The onions are really looking good,” Dan said. “Right now the market is steady, and we expect an increase in the market as we get into the summer months.”

Broker’s Perspective:
Matt Murphy with Paradigm Fresh in Fort Collins and Denver, CO, told us on June 7, “Demand is back this week after the post Memorial Day lull that was last week. Supplies, however, are still very spread out making it hard for the market to remain strong. Prices are holding on smaller onions and retail packages because the size profile is getting large. Medium yellows are almost non-existent this week. We are still getting supplies of big onions out of southern California and west Texas while central California and New Mexico are hitting their strides. Quality is very good for this time of year.

Michigan:
Jon Meyer with Market Brothers reports that the Michigan crop is all in and progressing well. “We had a cool spring, and the west side of the state was a little late getting planted,” Jon said. “The east side of the state was able to get in a little earlier. Right now, we have had some fairly consistent weather and the crop looks great. The weather forecast is saying 90s, and so we should be able to get some good growth. It’s amazing how the crop can advance with warmer temperatures.”

Colorado Western Slope:
David DeBerry with Southwest Onion Growers in Mission, TX, told us the Western Slope crop looks good. “I’m in touch with my three growers there, and they said that although the crop might be behind now, they fully expect it to catch up.” That deal will kick off right around Labor Day, David said. “The planted acreage is similar to last years, heaviest to yellows. There are some intermediate, lower pungency yellows on the front end of the deal, and a smattering of reds and whites that make up 6-7 percent of the volume each.”

Idaho-Eastern Oregon:
Herb Haun with Haun Packing in Weiser, ID, told us on June 6 that the new crop “looks good for May 15 onions.” Referring to the difficult winter and cold, wet spring, Herb added, “Some of our early onions might be a week late, and we’ll probably see some maturity around Aug. 15. The harvest crop could be a week to 10 days later, but it could be better quality going into storage.” He said the main harvest could come the third week of September, although the next few months’ weather could shorten that delay somewhat. “Yields could be off by 10 percent due to our later start,” he said. “At this end of the Treasure Valley, we had high rivers and sub-moisture that delayed planting, and some growers actually cut back on onion planting. Some of the ground went to beans this year.” He said the stands at this point “look very good… for mid-May onions.”

Washington Walla Walla:
Dan Borer with Keystone Fruit Marketing in Walla Walla told us June 7 that Keystone’s Walla Walla Sweet onion crop is right on schedule, and he expects to start shipping the week of June 19. “So far, so good,” Dan said. “We have had some warmer weather lately, so it looks like we will have a normal start to the season.”

Washington:
Dan Borer with Keystone Fruit Marketing in Walla Walla said the Washington crop progress for overwintering and hybrids is on track. “We will start supplying our overwinterings in late June,” Dan said. “We should start shipping spring seeded onions in late July.”

Peru:
Dan Borer with Keystone Fruit Marketing in Walla Walla, WA, reported he expects a normal crop for Keystone’s Peruvian deal. “Conditions have been favorable this season,” Dan said. “It looks like we will begin shipments to the U.S. in late July.” 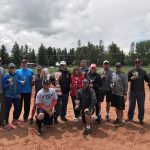