Market and Crop Update for March 22

MARKET
Northwest/Mexico/California:
Derek Ennis with L&M Cos. in Raleigh, NC, told us demand is good this week. “We are still shipping a small amount of storage crop from the Northwest, but we are mostly moving onions from across the border/South Texas,” Derek said. “About 85 percent of what we are selling now is new crop. The quality of the new stuff has been excellent.” He said that demand for medium yellows is strong. “The market is tight for medium yellows, but the white market is pretty weak.” Derek also told us L&M will be switching to California around the April 15, no later than April 20. “If there was ever a year we were going to start in the Imperial Valley early, this would be it,” he said. “The crop looks amazing, and we are excited to start shipping out of there.”

Washington/Mexico/Idaho-Eastern Oregon/Texas Rio Grande Valley:
Bob Meek with Onions 52 in Syracuse, UT, said his company has seen good movement this week. “We have been shipping from Mexico, WA and Treasure Valley with good demand,” Bob said on March 21. “Treasure Valley will finish this week. Washington has steady, limited supply. And Mexico shipments will decrease in upcoming days, with South Texas getting started the end of this week.” Bob added, “Yellows and reds in Mexico are decreasing in crossings, but all three colors will be dwindling down in the next couple of weeks as Texas begins to increase its availability. We can see the potential for market strength as national supplies potentially tighten up.” And, he said, “Quality is good.”

Idaho-Eastern Oregon:
Bernie Pavlock with ProSource Produce located in Hailey, ID, told us March 21that demand has been good this week and the market is steady. “Our Golden West facility in Parma, ID, is working to clean up, and things are on track for finishing the third week in April,” Bernie said. “We have  been really happy with this year’s season.”

Mexico/Texas Rio Grande Valley:
Don Ed Holmes with The Onion House in Weslaco, TX, told us March 21 his company is “rolling wide open.” He said, “We’re on the back side of Mexico now – have two or two and a half weeks to go heavy.” Don Ed noted movement is brisk, and quality out of Mexico is “outstanding.” He said, “We have red, white and yellow onions, and yellows are running medium to super colossals. We have medium and jumbo whites. This year the big sizes have been where most of the volume is. Mediums are at a premium.” Mexico winding down will be a “nice transition into Texas,” he said. “A few Texas onions are starting to show up, but big volume will come after April 5. The crop looks really good, progressing nicely.” Weather has warmed up some, he said, and he noted, “We like years when it’s been dry, although we could use some rain now.” Temps have generally been in the low 80s, hitting 90s only a couple of times. “It’s been perfect weather,” he said. Don Ed weighed in on market conditions, saying, “We would like to see the market up. Demand has been real good.” And he noted that transportation is “still a fight.” He said, “For years and years we didn’t have to worry about trucks, but now more Mexican product is crossing here, and a lot of product is being shipped out. Also, four Nor’easters aren’t helping things either. We’ve had to ship everything by reefer because we can’t risk freezing.”

Mike Davis with Tex-Mex Sales in Weslaco, TX, told us that demand is very good. “Demand has been very good, and the pricing has finally stabilized,” Mike said. “We expect to be shipping out of Mexico for the next three weeks. Last week, we started shipping Texas 1015s, and the crop looks great. We will start shipping Texas onions with more volume around April 1.”

David DeBerry with Southwest Onion Growers in Mission, TX, said his operation will see more volume out of Mexico this year than last, adding that there is not the peak in supplies that was experienced in 2017. “It’s much more spread out,” he said. Planting and weather contributed to the even spread of onions, and David said the onions also sized bigger because they were in the ground longer than last year. He said demand has been very good, with total volume “now catching up with year-to-date of 2017, and we’ll pass that.” He continued, “Overall it’s been very steady, with excellent quality. The biggest thing holding us up has been transportation.” As Mexico winds down, the Texas Rio Grande Valley will start next week. “By the second or third week of April both our shippers will be full speed,” he said. Initial loads will be all three colors, he said. “It’s very uniform, like Mexico,” David said of the crop. Noting the big volume peak, he said, “Last year we packed between 25 and 30 percent of the crop during March. This year it’s pretty much zero for this month.” Quality is “outstanding,” he said. “There’s been very little disease pressure. Everybody looks like an expert grower this year.” David also provided recent photos of Tampico onion harvest. 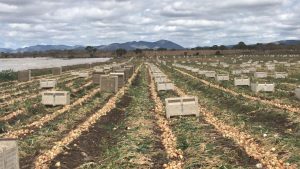 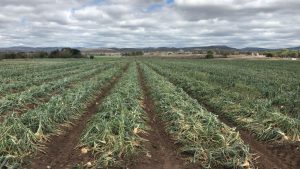 CROP
California/Texas Winter Garden/New Mexico Rio Valley:
Bernie Pavlock with ProSource Produce in Hailey, ID, told us that Prosource has a lot coming up with new crop in a variety of areas. “We’re shipping a little out of Mexico right now and have a small deal in Brawley that we will start on April 16,” Bernie said. “We are also very excited to start shipping out of Texas Winter Garden around May 1. We will have some beautiful Texas 1015s and conventional onions in all colors. Our Rio Valley deal in New Mexico will start up May 15, and this will be the second year operating out of that new facility. We have made some additional modifications to enhance our capabilities there.” Bernie said the New Mexico crop is looking nice, and the weather has been excellent. And he noted demand for new crop in Eastern regions needs springtime weather. “We really need the weather to start clearing up in the East,” he said. “Once the weather gets better, people will get out and start grilling and going to restaurants. It’s been tough lately with these Nor’easter storms. Last week the Boston terminal market shut down due to weather, and that hasn’t happened for 30 or 40 years.” Optimistically, he added, “We’re looking forward to better weather and increased onion movement.”

Texas Winter Garden:
David DeBerry with Southwest Onion Growers in Mission said this year’s Winter Garden crop is “right on schedule for a May 5 or 6 start.” He said the onions are “beautiful,” and he added the deal will run through mid-June.

Western Colorado:
David DeBerry with Southwest Onion Growers in Mission, TX, said his three Colorado growers will start planting the 2018 crop March 28. “It’s been very dry there, but there is enough water allocated for the crop,” he said.

Western Colorado/Utah:
Don Ed Holmes with The Onion House in Weslaco, TX, said on March 21 his Colorado grower is “getting ready to plant,” and the Utah operation has about “one-fourth in the ground now.” Both deals will be very similar to last year, he said. Colorado will come off in late August or early September, and the Utah onions will start shipping in mid-October.

Idaho-Eastern Oregon:
Bernie Pavlock with ProSource Produce in Hailey, ID, told us that the Golden West operation in Parma, ID, has been planting in Idaho-Eastern Oregon for about two weeks. “Things there are running smoothly,” he said. “We have at least 400 acres already in the ground.”

Grant Kitamura with Baker & Murakami Produce Co. in Ontario, OR, weighed on the Idaho-Eastern Oregon crop this week. “Planting is going well,” he said. “We are hitting the weather windows and are on track. Weather permitting, we should have no problem getting this season’s crop in the ground in a timely manner. The soil looks really good, and all of our water districts have plenty of reserves, so we will definitely have adequate water supplies for this year’s crop. So far so good.”

Vidalia:
Danny Ray with Ray Farms in Glenville, GA, provided us with the latest Vidalia news on March 21. “The commissioner is supposed to determine the Vidalia start date tomorrow (March 22),” Danny said. “He has been given a couple of options, and he will decide on one of those options tomorrow.” Danny said the crop looks good. “You know, we are down on acres this year, so we won’t have as many onions. But what we have looks nice, and we will still have plenty of marketable onions when it comes time to ship.”

Walla Walla, WA
As seen on this week’s featured image, the Walla Walla crop is looking good. Two weeks ago Michael J. Locati with Pacific Agra Farms in Walla Walla told us this season is looking good. He said, “Fall seeding is coming along nicely,” and provided us with a photo of those onions. Pacific Agra Farms is transplanting now and will finish that phase by early in April. A normal early to mid-June harvest is expected at this point.