This week it just possible that images speak louder than words. From the photos we’ve received from our contacts, we know many are in the field, in the shed and on the phone. At the bottom of our report, we have great harvest and planting shots from California, Wisconsin, Texas, New Mexico and Vidalia, including this week’s Texas feature image courtesy of David DeBerry.

MARKET
California Imperial Valley:
Steve Gill with Gills Onions in Oxnard, CA, reported that the company is harvesting in Brawley, CA. “We started in Brawley April 10, and we’ll bring in onions from there until around May 15,” Steve said. “Right now the market is rough. There seems to be an oversupply in the pipeline, particularly since there are so many districts going.” When asked about his new hire, Megan Jacobsen, Steve said, “The reason why we decided to bring on Megan was with all the labor and transportation issues, we feel that there is a real opportunity for value-added onions in the marketplace. Megan has excellent marketing skills and will be exploring those opportunities in foodservice, industrial, and retail.” For more about Steve’s new head of marketing, go to Gills marketing head, Megan Jacobsen

Bernie Pavlock with Pro Source Produce in Hailey, ID, told us on May 2 that Pro Source that the company’s IEO shipments have been complete for about two weeks, and ProSource is transitioning to California and Texas. “Like all areas that are coming up, the crop looks excellent,” Bernie said. “The size profiles are larger, and the growers are getting good yields.” Bernie said demand is very good this week. “Demand is great, and the market is steady. We would like to see a little higher prices, but as shippers in the Northwest clean up, prices should start to climb.”

Oregon:
Jared Gutierrez with Colombia Basin Onions in Hermiston told us on May 2 that CBO will be shipping fresh market conventional yellow and red onions through the middle part of May. “Our quality has been excellent all season, and we are very pleased with this last lot here at the end,” Jared said. “The onions have nice paper and have stored well.” Jared mentioned that CBO still has organic yellows available, but those will be cleaned up by the end of this week or the first part of next.

Idaho-Eastern Oregon:
Chris Woo with Baker & Murakami Produce in Ontario, OR, told us on May 2 that the company will be shipping fresh market yellows and reds for the next week or so. “We have onions available in all sizes, but the size profile is mostly jumbos,” Chris said. “We are shooting to finish up at the end of next week or the first part of the week after.” When asked about the market, Chris said it’s “messy,” adding, “The market right now isn’t that great, but think about it: It shouldn’t come as any surprise. Our neighbors to the north are still shipping, Arizona starting up, California is rocking full steam, Mexico is shipping longer than normal and Texas is still goin’.” He continued, “It looks like there are only two of us in the Treasure Valley still shipping, and the Market News isn’t even showing shipments out of here this week, but we are still moving yellows and reds with exceptionally nice quality at a good price.”

South Texas Rio Grande Valley/Winter Garden:
Don Ed Holmes with The Onion House in Weslaco told us on May 2 he’s in the last quarter of the Rio Grande Valley deal. “We have about another two weeks and are on track to finish here May 15,” he said. “And we saved the best for last. Our later maturing onions have really good size and quality and also very good appearance.” All sizes and colors are shipping in three- and five-pound consumer packs and also cartons, he said. “Labor is tight still, but trucks have loosened up a little.” On market conditions, Don Ed said, “As we see South Texas and Mexico drop off, Idaho-Eastern Oregon pretty well done and Washington shipping less, the market is strengthening, and we’re excited to see that.”

David DeBerry with Southwest Onion Growers in Mission said on May 2 his operation has another two weeks in the Rio Grande Valley, and next week he will start in Winter Garden, running there until June 10. “The crop up there looks like experts grew it,” David said. “We’re seeing unprecedented yields, good size and excellent quality. That’s the case for everybody – record yields for everyone.” David said transportation is not noticeably better in South Texas. “We are loading onto reefers what we would normally load onto flatbeds,” he said. “There are no flatbeds available. We’re told by carriers that there are many flatbeds still tied up hauling materials to areas hit by last year’s hurricanes. Also, there are flatbeds hauling pipe for oil fields.” He cited one carrier who told him that “53 or 54 loads are offered each day for every one flatbed.” David said, “I can’t verify that, but we’re hearing it over and over. And the ELD is not helping. That’s a commerce killer.” As far as labor, he said, “We have had no issues.”

Texas/Winter Garden:
Bernie Pavlock with Pro Source Produce in Hailey, ID, said on May 2 the Uvalde deal will start up on Monday, May 7. “We will start shipments on Monday,” Bernie said. “But we’ll be running full steam by the end of next week.” Bernie said that the crop looks “very nice,” and Pro Source will be shipping out of the area through the middle of June.

Vidalia:
Dale DeBerry with AllVeg Sales in Boerne, TX, is in Uvalda, GA, with B&B Farms and said on May 2 the Vidalia onions are beautiful this year, adding that he’s packing and putting some in storage at the same time. Dale told us he’d been in Georgia until June.

CROP
California/Bakersfield
Steve Gill with Gills Onions in Oxnard, CA, reported that the Bakersfield crop is doing very well and they will start harvesting there about June 5 or 6. “We have made improvements to our line and installed some new grading equipment,” Steve said. “We are excited to have folks see the new equipment, so we will be part of the National Onion Association convention field tour in July.”

Oregon:
Jared Gutierrez with Colombia Basin Onions in Hermiston reports that CBO growers have all their onions planted, and things are looking good. “As a region, we had a cooler spring, which set everyone back a little,” he said. “We have had some units of warmth, so things are starting to perk up nicely.” Jared said CBO will keep the same planting program that it had last season.

Western Colorado and Utah:
Don Ed Holmes with The Onion House in Weslaco, TX, said on May 2 that John Harold’s West Slope onion crop is all planted, and the stands are looking good. That crop generally comes off in early September after Labor Day. In Corinne, UT, the onions are also all in the ground and emerging, and Don Ed said, “That’s good news on both of our winter deals.” Utah starts shipping in October.

Colorado Front Range:
Ryan Fagerberg with Fagerberg Farms/Fagerberg Produce in Eaton told us in late April the 2018 crop planting is coming along well. Recent winds that hit much of the state blew over the top of the farm without causing any significant damage, he added. “Our seed has been planted for several weeks, and we’re starting to see some emergence. We’re planting sets now and should be finished by May 10,” he said. This is the second year for Fagerberg’s organic fields, and Ryan said the inaugural season was “good overall.” Harvest at Fagerberg Farms will start in late July, said.

New Mexico:
Bernie Pavlock with Pro Source Produce in Hailey, ID, told us May 2 that the Rio Valley Onion crop near Hatch is shaping up nicely. “No matter what the growing area, things are looking very nice for these spring and summer onions,” Bernie said. “New Mexico is no exception. We are excited to get going there. This will be the second season for the new facility, and improvements have been made, including the installation of auto-baggers. We’re anticipating a going to be a great season for New Mexico.”

Wisconsin:
Doug Bulgrin with Gumz Farms Inc. in Endeavor, WI, told us on April 26 that Gumz would still be shipping for the next couple of week. “We are into our third day of planting both seeded and transplants,” Doug said. “We are having great weather, and things are going well.” 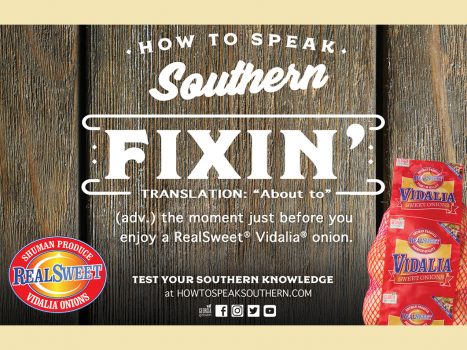 Shuman kicks off ‘How to Speak Southern’ promo