Market and Crop Update for November 2

MARKET
New York:
Featured Image provided by Minkus Family Farms – Rick Minkus with Minkus Family Farms in Hampton, NY, told us on Nov. 1 that his operation is very busy this week. “Some of our neighbors have indicated slowing in demand, but our plate is full,” Rick said. “We have taken on some new customers, but we are always looking for more.” Rick said jumbo yellows are the bright spot in the market. “Medium yellows are sluggish this week, so the good market for jumbos helps heal the hurt,” he said. “Right now, we are selling 30 percent jumbos, and with such a widespread between mediums and jumbos, we are extremely happy to be moving so many jumbos.” Rick said the lower price on mediums has something to do with Canada  putting on the pressure. “Canada pretty much sets the bar for mediums, and then goes lower,” he laughed. He went on to say whites are also doing well. “We are fortunate to have a good supply of whites, and pricing for jumbo whites is great.” He said onion quality is excellent. “The quality is absolutely superb,” he said. “With a good market and excellent onions, we are definitely in a good spot right now.”

Michelle Gurda with A. Gurda Produce in Pine Island, NY, told us on Nov. 1, “Across the board, all colors have steady demand this week.” She said A. Gurda is shipping entirely out of storage, and sizing has run more to mediums than jumbos this year. “We were a little later getting into the fields, and harvest came a little later.” Michelle said pricing is steady and has stayed “pretty much the same the last couple of weeks.”

Colorado Front Range:
Bob Sakata with Sakata Farms in Brighton told us on Nov. 1 Sakata Farms is sorting out of storage, and he said the market has been good. “We anticipate shipping through the end of February,” Bob said. “Our onions sized beautifully, with 70 percent jumbos and 30 percent mediums.”

Idaho-Eastern Oregon:
Tiffany Cruickshank with Snake River Produce in Nyssa, OR, told us Nov. 1, “I’ve never seen a harvest with a market this high, and I’ve never seen a market go up like this during harvest.” She said, “Demand is a little light, but we’re down on volume, so it’s all going to work out.”

Herb Haun with Haun Packing in Weiser, ID, told us demand this week is moderate. “Demand for us is pretty equal across the board for all sizes and colors,” Herb said. “The market is stable, and I think there is a chance that the white market could be increasing.” He said all of Haun’s onions are under cover. “We have all sizes and colors available,” Her said. “And the quality looks very, very nice.”

Washington:
Larry Denke with Agri-Pack in Pasco said the market has remained fairly steady. “Everything is much the same. Jumbos have slipped slightly, but mediums are steady, and reds are pretty much what they have been. Whites don’t seem to change that much.” Larry said Agri-Pack has good volume on all three colors, and he said early quality issues have been corrected. “We expect to clean up in April,” he said.

Brenden Kent with Sunset Produce in Prosser said on Nov. 1 that demand has picked up this week. “We saw demand slow up slightly last week, but it has definitely picked up,” he said. “We are already starting to get holiday orders, and that is a very good sign.” Brenden said he expects demand to rise sharply in the next seven to 10 days. “Thanksgiving comes early this year, so we are starting to see the holiday push come early too,” he said. “We could get an extra week out of the holiday deal with an early Thanksgiving pull that will carry us through Christmas.” He also said demand for whites is very strong and reds and yellows should see increased demand in the weeks to come. “Reds are a big item for Thanksgiving, and yellows are a holiday staple,” he said. “We have also seen increased demand for our sweet onions.” Brenden added that Sunset is optimistic about the future. “The quality is outstanding. Honestly, I think these are some of the best onions we have ever packed. With the great quality and the markets achieving a solid level, we really feel good about this season,” he said.

CROP
New Mexico:
T. J. Runyon with Mesilla Valley Produce in Las Cruces told us the overwinters are in, and he added, “We’ve got a good stand up and going. The weather has been good for the most part, and we’re excited for 2018.” T.J. said the long-term forecast is for a mild winter, and he said early onions could come in around May 20. He called 2017 a “decent year,” adding, “We did as good as we could. It never was a great market.” 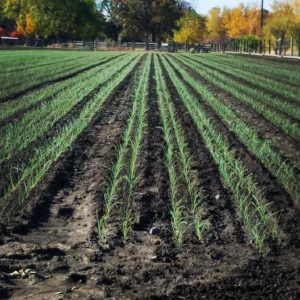 Washington:
Larry Denke with Agri-Pack in Pasco said overwinters are “coming up and looking good.” He added, “I’ve heard we’re expecting a winter similar to last year. We could use the snowfall to insulate, but we’re hoping it’s not as severe as it was last winter.”