Market and Crop Update for November 9

MARKET
Oregon:
Trish Lovell with Curry and Co. in Brooks, OR, told us on Nov. 8 that demand had been fairly quiet for the week. She said, “Things are picking up with the holiday pull. Supplies are tight, and in talking with other shippers, I’m hearing their overall volumes are down.” Trish added, “Prices have remained steady, and I’m seeing prices strengthen, climbing up. This should continue as we go through the season.” She said, “Transportation still a problem for all areas. I expect transportation to continue to be a key issue as trucks begin the ELB. It will definitely affect delivery times as well as freight costs.”

Washington:
Bob Meek with Onions 52 in Syracuse, UT, said on Nov. 8 the company is seeing brisk movement from its Prosser, WA, operation. “We’ve been very busy. Business is good, and the holiday rush has hit. But even before it hit, we had good movement and good quality. And we’re happy with prices.” Bob said the Washington facility is shipping all colors and varieties, including organics and sweets. One highlight of the Washington production is Onions 52’s Sunion, the tearless sweet developed by Nunhems. “We grew it on two farms in the Prosser region,” Bob said. “It’s in storage and waiting for the sweetness level set by Nunhems. Once it reaches that level, we will pack and ship,” he added. Bob said it will most likely be early 2018, although some might go out for Christmas. “We’ll definitely have Sunions by the first of the year,” he said.

Idaho/Washington:
John Vlahandreas with Wada Farms in Idaho Falls reported from his Salem, OR office on Nov. 8. to say, “Demand has been real solid for everything across the board. In fact, this is the real first Thanksgiving pull I have seen in a few years. For the past several years, it’s just been normal selling minus the holiday pull.” John said the good Thanksgiving pull could be due to fewer onions floating around in the pipeline. “The only drawback is we can’t get enough for everyone,” he said. John also said demand for mediums is increasing. “The increased demand we are seeing for packages should strengthen the medium yellow market, which is needed,” he said. He noted that tightened transportation continues to be a concern. “Potato shipments have put the squeeze on truck availability for onions. Right now you can get trucks, but with Christmas trees starting, you’re going to pay a premium for it,” John said. Quality has been “fantastic,” he said.

Idaho-Eastern Oregon:
Jason Pearson with Eagle Eye Produce in Nyssa, OR, told us demand has increased this week. “Demand is getting very strong with the holiday approaching,” he said. “In particular, we see increased demand on medium and jumbo yellows.” Jason told us the market is rising as well. “With the holiday demand, the market is really on the move up,” he said, adding that holiday orders have created tight availability. “We are really tight this week, but our availability should open up a little next week,” he said. Jason said that Eagle Eye’s onion quality is “exceptional.”

Dan Phillips with Central Produce Distributors in Payette, ID, told us the market is steady this week. “There was a little push in the market yesterday, and it slowed demand a little, but this morning it looks like demand has picked back up,” he said. “Today everything is falling into place nicely.” Dan said demand is even across the board for all colors and sizes, and he also said transportation continues to be an issue. “No one seems to be able to get railcars, so everyone is trying to load East Coast orders with trucks, and they are very hard to come by,” he said. “I haven’t heard about Christmas trees hauls yet, but we know they’re coming, and that’s going to add to the limited truck availability.” Dan said Central’s quality is excellent, saying, “Honestly, we just aren’t getting culls or No. 2s.”

Bob Meek with Onions 52 in Syracuse, UT, said since harvest ended, the Idaho-Eastern Oregon facility is “focused on running onions.” He reported movement as steady. 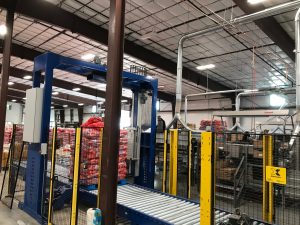 Utah:
Bob Meek with Onions 52 in Syracuse said the season is going well and the company has moved into its new packing plant. “We’re moving everything,” he said of varieties, sizes and colors. “What we don’t have in Utah, we bring out of Washington.” The predominant onion from Utah is the yellow, but Bob said there are also some reds and whites grown there. And he said the new facility is handling production well. “We started with one bagging machine, and after we got it up and running, we started the process of putting in more. We will have three weighers for consumer packs and a robotic palletizer.” Bob noted the critical shortage of labor as a factor in automation in the new plant.

Colorado Western Slope:
From his Texas office, David DeBerry with Southwest Onions said all his Western Slope onions are being shipped out of storage now. “We put more in storage there than ever before, and I doubt we’ll be done by the end of January. The market has been good, and quality has been beautiful. It’s a rare combination when you have good quality, a good market and good yields,” David said. He noted that the capacity of the Delta repack facility was doubled this season with a new bagger. And about trucks, he said, “Transportation is tight but manageable.”

Don Ed Holmes with The Onion House in Weslaco, TX, said both his Colorado Western Slope and Utah deals were “steady as she goes.” He said on Nov. 8 that “last week was excellent out of both areas. Deliveries were fantastic, and demand was good.” He added, “We’re probably a little ahead of where we’d like to be, but pricing is good, and it’s been a long time since I’ve seen this good of a market in November. I don’t think I’d ever seen as good a market in October. Everyone is really optimistic, and we’re looking forward to this month.”

Broker’s Perspective:
Matt Murphy with Paradigm Fresh in Fort Collins and Denver, CO, told us on Nov. 8, “Demand is average for this time of the year. I do sense it increasing as we get close to Thanksgiving. Availability is still good on all colors and sizes, although that could change soon, especially with white onions.” He said, “Our biggest challenge remains transportation. I think FOBs are softening a bit just to make up for the difference in higher freight rates trucks are commanding. To quote John Holladay, Paradigm Fresh Logistics Manager, ‘This truck thing is a nightmare.’ There is good chance transportation will get worse before it gets better.”

CROP
Texas Rio Grand Valley and Winter Garden:
Don Ed Holmes with The Onion House in Weslaco said planting in the Rio Grande Valley will wrap up on Monday, Nov. 13. As with his Mexico deal, Don Ed said onions are up, weather is good, and he anticipates good stands.

David DeBerry with Southwest Onion Growers in McAllen said on Nov. 8 that his fields in the RGV would all be planted by Nov. 9, “and then we’ll start immediately in Winter Garden.” David said the Rio Grande Valley got off to a slow start. “But then we had good weather, and our early stands are better than normal,” he said. The progress has made up for the later start, and he said the season will likely run the last half of March, all of April and the first half of May. Winter Garden will likely run from early May to mid- or late June, he said.

OnionBunsiness.com caught up with Mike Davis with Tex-Mex Sales LLC in Weslaco on his way to the farm on Nov. 8. “The weather has been very good for planting,” Mike said. “We have about a week to go and everything will be planted.” He said the onions coming up look very nice. “We don’t see any weather problems ahead as we’re completing planting, and if all goes according to plan, we should have a very good crop this year.”

Mexico:
David DeBerry with Southwest Onion Growers in McAllen, TX, said he had talked to his growers in the Tampico region of Mexico, and planting had just finished this week. “For us, that’s about two weeks late,” he said. “We also started about two weeks earlier.” The upshot will be a crop that is “more spread out than normal. We will probably start earlier and end later, and maybe that will smooth it out.”

Don Ed Holmes with The Onion House in Weslaco, TX, said his Mexican growers were finished with the direct-seeded and would be finished within days with transplants. “We have onions up,” he said. “The weather’s been good, and we should have good stands.” Don Ed said some sweets will come in early, but he noted, “The crop hasn’t been planted to be early.”

Mike Davis with Tex-Mex Sales, LLC in Weslaco, TX, told us the Mexico crop is coming along well. “We know that our Mexican growers have had the same good weather recently, so things there should be on track,” he said on Nov. 8. Mike also told OnionBusiness.com he would provide more Mexico crop details in the weeks to come as he receives updated reports and photos from his growers.