Market and Crop Updates for June 1

California Imperial Valley:
John Vlahandreas with Wada Farms in Idaho Falls, ID, reported to us May 31 from the Imperial Valley that Troy Caston Farms is still shipping. “We are going to run through Friday for sure and maybe on Saturday with some reds,” John said. “The market in general has been down. We started the season continuing the Northwest market woes, and it just hasn’t gotten much better. It would be a whole lot better if we all didn’t grow so many onions. You can’t win every week, or every year, and the market this year is probably the worst we have seen in four years.” John said the Imperial Valley has also struggled with labor this season. “Everyone has a really hard time getting good help,” he said. “You know, years ago you would have the same people that returned for the season, and they knew what they were doing. Now, it’s hard to get help, and when you do, they don’t know the job and it takes twice as long to get the work done. It has really been a struggle.” On the up side, John reported that even with the recent heat, the Caston onions have great quality. “Troy did a good job to cover them, because they are delivering really well,” he said.

California Central Valley:
John Vlahandreas with Wada Farms in Idaho Falls reported on May 31 that upon completing the season in the Imperial Valley, he will move to the Five Points area. “We are shipping out of Five Points now, and even though it may have been a little early, the onions are always really nice coming out of there. And it looks like it will be another good crop,” John said.

Mexico:
Steve Smith with National Onion Co. in Las Cruces, NM, said his Mexican loads from Chihuahua started shipping May 2, and demand now is good for reds and whites. “They’re moving really good, but yellows are very draggy,” Steve said. “There are just too many onions. We’re doing well with our onion ring contracts, but we’re not shipping the medium yellows.”

New Mexico:
John Vlahandreas with Wada Farms in Idaho Falls, ID, told us Wada has started shipping out of the Hatch area in New Mexico. “After my California deal, I will start selling our New Mexico onions,” he said. “The crop is looking good. The sizing started out a little on the smaller side, but we are seeing the larger sizes start now.”

Steve Smith with National Onion Co. in Las Cruces told us May 31 he would start the New Mexico shipment on June 5. “The weather has been very good, and there’s a lot of size, a lot of jumbos and colossals,” he said. “Quality looks very good, and we’ll run out of New Mexico through the end of July.”

Northern Colorado:
Bob Sakata with Sakata Farms in Brighton told us his onion crop is looking “mostly good.” He said, “We had hail three weeks ago and had to replant 60 acres.” Sakata’s onions will come in starting Labor Day, with the replanted fields coming in about two weeks later, he said.

Western Colorado and Utah:
Don Ed Holmes at The Onion House in Weslaco, TX, reported in from Las Vegas and told us said all onions he’ll be selling out of Colorado’s Western Slope and Utah are looking good. Colorado’s intermediate onions will come off in late August, and Onion House’s onions from Utah will start shipping around the first of October. Both areas will have yellows, whites and reds, he said.

Steve Smith with National Onion Co. in Las Cruces, NM, said he will begin working the Utah harvest on Aug. 15. Reds, whites and yellows all will ship, and he said the crop looks good now.

Idaho-Eastern Oregon:
Grant Kitamura with Murakami Produce Co. LLC in Ontario, OR, told us the Idaho-E. Oregon crop is growing better with the recent heat, but it is still behind. “There are all kinds of fields out there right now,” Grant said. “The progress of the plants looks irregular. Some are further along than others. That’s due to the irregular spring weather we’ve had. And yet we do have fields that look absolutely beautiful. It’s really hard to say what will happen, but again, we are definitely behind overall. We just have to wait and see what the next two to three months look like.”

Washington:
Brenden Kent with Sunset Produce in Prosser told us on May 31 that the crop has progressed quite a bit in the last week. “It has cooled off a little over the last couple of days, but the warmer weather we had last week has helped a lot,” Brenden said. “I would say it looks like we’ll have and average crop this year And though we are still behind, the crop looks healthier and we are in a better position than when we were earlier.”

Steve Smith with National Onion Co. in Las Cruces, NM, said the Prosser, WA, crop he works could be later than normal due to cooler spring weather. “I’ve heard they have mild weather now, but they were later planting this year and could be later harvesting,” Steve said.

Larry Bauman with L&L Ag. Production in Othello, WA reports that after seeing the crop in the Othello area it is coming along as projected. Larry said that they finished packing last season’s crop on May 27. 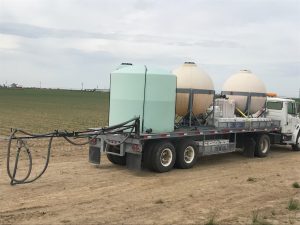 ‘Z’ is for amaZING Madison Beck