As the National Onion Association Winter Convention carries on in Maui, OnionBusiness.com is getting solid reports from the Lower 48 this week, and our contributors are by and large upbeat. Many shippers are reporting good movement coming off Thanksgiving and heading into Christmas, although trucks remain tight. Prices are still not great but are steady, we’re told.

MARKET
Nevada:
Teri Gibson with Peri & Sons in Yerington told us Nov. 28 that Sunions are front and center at this time. “Peri & Sons Farms is showcasing Sunions® again this fall,” she said. “We are one of a select few that grow Sunions, which is the first truly tearless onion available in North America certified tearless through testing by the Bayer Sensory Lab and the Ohio State University.” She added, “Unlike other onions, Sunions mature into a milder, sweeter flavor over time and are a Non-GMO variety that provides less variability between onions.” The sweet category continues to grow at Peri & Sons, and Teri said the operation is in its second year of Sunion production. “While the brand is still just gaining awareness, it requires educational efforts to share its tearless benefits with consumers, and Peri is working with retailers to put some point of sale material on display to educate the consumer about Sunions.” Retail Sales Manager Jessica Peri noted that some retailers “don’t do much point-of-sale so the display-ready copy has to tell the story.” Acreage for Sunions is currently limited, “But plans are in place to grow the program to meet the expected increase in demand,” Teri said. 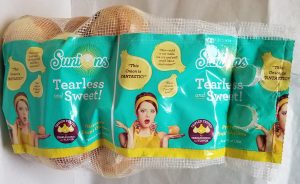 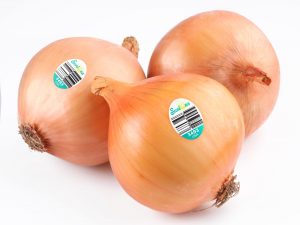 Idaho-Eastern Oregon:
Steve Baker with Baker & Murakami Produce in Ontario, OR, told us Nov. 28 that demand has been solidly steady. “Our demand is good this week,” he said. “We haven’t varied more than 5-10 percent for loads shipped each week for the past two months.” Steve added that demand for smaller onions, “especially medium yellows and medium reds is still strong, though we still have very good movement on jumbo sizes.” And, he said for the week after Thanksgiving, “The market is steady so far this week for us.” Looking at availability, Steve said, “We have good availability on all colors, although we are tight on medium reds.” And, he added, quality has been “very good this season.” Transportation remains tight, and Steve said, “Rates are definitely higher in most places than they were a few weeks ago.”

Ryan Stewart with Fort Boise Produce in Parma, ID, said on Nov. 28 that Monday of this week was busy coming off Thanksgiving and that “the last couple of days have been a little bit quieter.” He said pricing “is hanging in there,” and his observation is that “people have reserves right now.” Medium yellows have been in demand, he added. Ryan said Fort Boise has moved some loads of whites and yellows with some reds to the Mexican border, “mostly jumbos and colossals.” He also noted the shortage of onions in Europe could heighten demand, and he said, “Hopefully the market will get better soon.” Reefers are “definitely tight,” he added. “You can find them, but you have to pay more.”

Jason Pearson with Eagle Eye Produce reported from his Nyssa, OR, sales office on Nov. 28 to say, “The demand this week has been slow, but that isn’t anything unusual. It’s always the calm before the Christmas and New Year storm.” He added, “That said, yellows are still moving pretty well, and we are moving some reds and whites.” Jason said the market is still not where it needs to be. “Prices are still too cheap,” he said. “I would think things are going to change with Christmas and the New Year demand, but we’ll just have to wait and see.” Jason added that quality continues to be excellent. “The product is beautiful, and we have plenty of availability across the board.”

Chris Woo with Owyhee Produce in Nyssa, OR, said on Nov. 28 that demand has been steady, adding, “Pricing still needs to be worked on.” Demand has been highest for medium yellows, with larger sizes following and “then reds, then whites,” Chris said. Noting that shipments out of the Treasure Valley are up “3,000 loads over this time last year,” Chris said, “Our demand has been good, but prices haven’t increased. Any increase in delivered price has gone more to transportation instead of production.” And he said that “hopefully after the National Onion Association Convention we’ll see some bullishness” that could bump the market up. “We expect a push for Christmas,” he continued. The holiday season, with Christmas trees now being shipped, has made trucks even tighter. “Trucks are tight, and we’re seeing Christmas trees in the lots now.”

Western Colorado/Utah:
Don Ed Holmes with The Onion House in Weslaco, TX, told us Nov. 28 that business this week has been strong. “We’ve got real good business right now, and it’s all because we’ve got the trucks,” he said of his Colorado and Utah deals. “We wish the market was better, and maybe it will push itself a little bit next week after the convention,” he added. For the Colorado deal out of Olathe on the Western Slope, Don Ed said, “We still have pretty much everything available, a good mix of colors and sizes.” And he added, “It’s the same out of Corinne, UT.” Quality has been excellent, he said. “We just need the market to get up.”

New York:
Michelle Gurda with A. Gurda Produce in Pine Island told us on Nov. 28 that demand has slowed this week. “Everyone stocked up for Thanksgiving, and now they are trying to get through their supplies,” she said. “It does seem that jumbo yellows are doing pretty well, but that has a lot to do with the fact that transportation out of the west has tightened up, which makes them harder to come by than some of the other sizes and colors.” Michelle said 75 percent of what A. Gurda is shipping is coming from New York. “Quality is decent,” she said. “We have been surprised that our yellows are looking as good as they do with the all of the rain we had. We are pretty happy about that.”

Broker’s Perspective:
Jason Vee with Vee’s Marketing in Superior, WI, wrote this week, “It’s difficult not to be jealous of the people that made it to NOA in Hawaii this week. I got one call from the beach this morning, and I had 9 degrees showing on my truck on my way to work.”

He added, “Speaking of trucks, we are right back to struggling out of the Northwest again. The cost of recovering lost loads by getting trucks off the board is out of control. A $4,000 lane shoots up to $6,000 on short notice. It’s making delivered pricing difficult. My cash flow goes make a little, make a little, lose a lot.”

But, he continued, “On the upside, markets are very stable. They aren’t high, but they aren’t declining. I’m moving quite a few sweets and reds. Size profile seems to have evened out as well. Early in the season we were flooded with large onions. Now I have good access to everything from prepacks to supers.”

Jason added, “I’m getting more pressure to comply with quarterly pricing and quotes recently. I can’t tell if that’s a trend yet, or if it’s just the few people I deal with. But I am seeing more of it. Having been here 12 years now (maybe 13), I’ve seen the occasional home run market in March and April. So, I’m hesitant to comply so far out. Whether I hesitate or not is neither here nor there. Because sometimes I just don’t get a choice. If retailers want quarterly pricing, they get quarterly pricing.”

Crop News
Texas Rio Grande Valley:
Don Ed Holmes with The Onion House in Weslaco said on Nov. 28 everything is in the ground now, and he added, “With the drizzle and light rain we’ve had the last three or four weeks, it’s been fantastic weather to get onions up. We’re really happy with the stands.”

Mexico:
Don Ed Holmes with The Onion House in Weslaco, TX, said all onions in the Tampico area deal are in the ground, and he said early loads will arrive mid- to later in January, starting out with sweets. “We won’t see real volume until later in the month,” he said, “and [the first part of the deal] will be sweets only.”