The USDA National FOB Review for Monday, Nov. 30, indicated a mixed market, with demand ranging from “fairly light” to “moderate,” depending on shipping region.

Columbia Basin, WA, and Umatilla Basin, OR, saw moderate demand with a medium market for yellow, higher for whites and stead for others. Yellow Hybrid 50# jumbos were at $6.50-$7.50.

From our “boots on the ground sources”:

Don Ed Holmes of Onion House in Weslaco, TX, said favorable weather conditions for 10 days allowed for planting of 80 percent of the ’16 crop. “We were afraid we’d only get 60 percent of a total crop in, but we worked 15-hour days for the last 10 days (leading up to Nov. 15),” he said.

“The onions are up and look good.”

Onion House continues to ship out of Colorado from the Western Slope and from Utah. “Onions are still moving good, and so far we’ve been getting trucks for both areas. That’s Colorado and Utah’s claim to fame – trucks are available there during Christmas tree season.”

He said overall demand, however, was not “quite as good during Thanksgiving as it was a year ago, although movement was still good.”

Mexico is coming in early with sweets, and Don Ed said they’ll start appearing in stores between Jan. 10 and 15.

“I think it will be an orderly market, though. I’m headed up to the NOA meeting in San Francisco, and I believe we’ll see numbers that are encouraging. I won’t be surprised to see a little jump in numbers soon.”

From IEO, Trevor Frahm, sales manager at Frahm-Fresh Produce in Ontario, OR, said, “We had good demand for Thanksgiving with good movement on all sizes and colors.  Our demand for whites was good, which has depleted our supplies, and now we are running only reds and yellows. Quality continues to be good, and the demand is steady this week.”

Trevor said he doesn’t foresee heavy demand for December, but that has traditionally been the case. Frahm-Fresh has been ahead on shipments over last year, and although he said he is somewhat disappointed that the market has been lower than expected, Trevor said he thinks this will change at the first of the year, and the area will see more demand and a strengthening market.

Chris Woo, VP at Murakami Produce/Potandon Produce in Ontario, OR, said that Thanksgiving orders were fairly strong two weeks before the holiday but showed down in the days leading up to Thanksgiving.

This week the demand has been moderate, he said. Pricing is steady with most of the orders for jumbo yellows and reds. Chris said that Murakami/Potandon has been happy with foodservice using more reds, noting, “It helps the red market when there are so many restaurants using reds for salad bars, hamburgers and pizzas.”

Woo said during December holidays consumers are often leaning toward lower priced foodservice and trying to utilize funds for other gift buying, travel and other activities, and red onions fit into the overall picture well.

During December, he noted, buyers often let their inventories run lower because they don’t want big supplies at year’s end.

He also said he sees demand increasing at the first of the year because buyers will need to increases their available supplies.  This should also help strengthen the market, and Chris added, “Fingers crossed.” 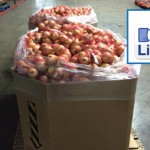