Chis Woo with Potandon Produce said demand out of the SJV is good with medium yellows slightly higher than other sizes, primarily due to the fact that there are fewer mediums than other sizes. So far, heat does not seem to be an issue for quality shipped from the area. Chris said.

Rich Hoffman, Santa Maria Seeds in Bakersfield told OnionBusiness.com on June 21 that while this week’s heat may present a minor factor to growers and shippers in the area, heat is something the Bakersfield industry is accustom to and prepares for. The snowing techniques the growers implement definitely help the onions in the field. Growers have also been doing a good job of slotting onions with different varieties so that they can stagger their harvest, Rich said. “Though there may be a few fields behind in harvest, most are on track. Growers have been working very hard to get the onions into storage facilities.” At this point, it appears, most hand clipped onions are in containers, and machine harvested onions are in storage.  Hoffman visited one of his grower’s packing facilities on June 20 and said that the quality is fantastic. Sizing is leaning toward jumbos.

California Harvest photos and video as well as seed crop photos listed below.

Paul Reeping of G Farms in Phoenix told us that the operation finished up the season early last week, and he said the Arizona deal looks like it is coming to a close for most shippers, and he noted the market was strong throughout the entire season.  The quality shipped was excellent, he said, and prices were very good.

James Johnson of Carzalia Valley in Columbus reported that the fires plaguing the state are to the north of his area. As for the crop, James said the quality is excellent, and he noted, “I’m upset with some of my neighbors’ pricing. They’re quoting $12 and getting $11.” James said Carzalia has a good range of sizes in all three colors and will ship through Sept. 1. “We will provide any package that anybody wants,” he said. Carzalia will take a couple of weeks off when the last loads are shipped and start planting the next crop on Sept. 15.

Chris Woo of Potandon says demand has been good for Vidalia onions, and the market is steady, slightly higher this week than last.  Shipments will continue until the end of July.

Chris Woo of Potandon said there are onions coming out of San Antonio in low volumes, but he added that state’s crop is winding down.

Chris Woo at Murakami Produce in Ontario, OR, reports that the 2016 crop is progressing nicely and stands look very good. Early onions are starting to bulb, he said, and Murakami expects to start shipping in early August.

Western Slope onions are looking good, according to David DeBerry of Southwest Onion Growers/Utah Onions, marketers for onions grown by Coal Creek Produce of Montrose, Hines Farms of Delta and Ahlberg Farms, also of Delta. David was in the Delta/Montrose area on June 22 and said while some of the stands are a week or two behind, recent warm weather should allow them to catch up quickly. “Acreage is the same as last year, and we expect to ship 500-550 loads. We’ll start Sept. 15 and ship through late January,” he said. All three colors are grown, and David said, “We offer virtually every style of packaging.”

Bob Sakata at Sakata Farms in Brighton told us on June 20, “We have one of the best looking onion crops ever.” Bob said conditions were sketchy at the start, with a cold and dry March. “We got all our onions planted, though, and then it rained in April and May.” There was recent light hail in the region, but said it was light and didn’t affect the crop to any great degree. Harvest and shipments will start soon after Labor Day, although Bob said, “If there’s a promising market, we will start early.” 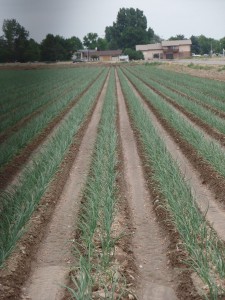 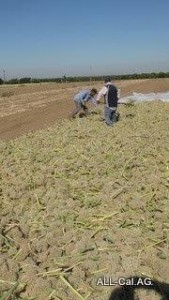 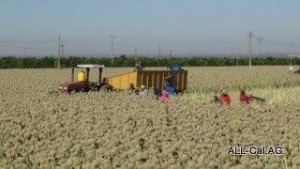 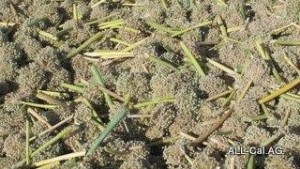 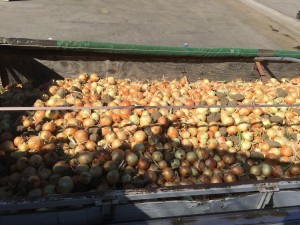 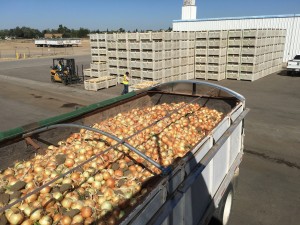 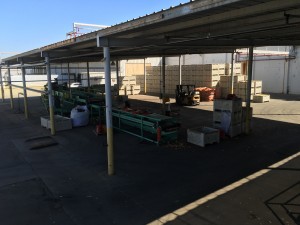