Rich Hoffman with Santa Maria Seeds in Bakersfield told OnionBusiness.com on Aug. 3 that Bakersfield is just about finished, and there aren’t many onions left in the area. He said his growers have reported a good season and they were able to get the onions in storage and sold without many heat problems.

Rich said in the Lancaster area, shipping is well underway.  He said that fortunately the area has not experienced much heat lately, and the quality coming out of Lancaster is great. He also noted that currently the market seems to be holding.

Stefan Matheny told OnionBusiness.com that River Point Farms in Hermiston, OR, is currently shipping transplants.  Matheny reports that RPF has had excellent growing conditions this season, and the quality has been very good.  This week the lots running appear to be larger in size. Stefan said even though there have been more shippers entering the market, pricing has been good and the market has been steady.

Dan Borer with Keystone Fruit Marketing in Walla Walla, WA, said after Keystone completes its Walla Walla season, it will transition to the Hermiston Sweet onion program. Growers are beginning harvest now and will begin shipping around Aug. 15, starting with sweet yellows and adding the Hermiston sweet reds later in September. Borer reported that the Hermiston sweet crop looks excellent and a great season is expected. He also told us that while Keystone’s main focus is on their sweet program, the company does work with some growers on hybrids and will have early varieties available in a couple of weeks.

Keystone is finishing up its Walla Walla crop and will complete that season in two weeks, according to Dan Borer. Dan said the Walla Walla season was very good, with a strong market. “Walla Walla Sweets continue to have a tremendous following both regionally and on a national level,” he said.

Utah Onions’ Washington deal started shipping the last week of July, and Shawn Hartley said the crop looks good in both quality and size. The Prosser program, which includes organics, will run to the end of April, he said.

Utah Onions starts shipping its Utah transplants Aug. 8, according to Shawn Hartley. Shawn said the volume will be mostly yellows with some reds, and he said the growing season has been “up and down,” with some hail during the season. He noted the seeded onions will start shipping the end of August, and the Syracuse facility will have onions through late March or early April. “It’s an average crop this year,” Shawn said.

Fagerberg Farms/Fagerberg Produce was right on schedule with its 2016 crop, with first loads shipped out on Aug. 1.

Dan Borer with Keystone Fruit in Walla Walla, WA, said Keystone continues to be a major importer of Peruvian sweet onions marketed as Mayan Sweets. The onions are imported into four different ports, and Borer said the Mayan Sweets will begin in late August and will run through February, peaking in late October or early November – just in time for the holidays and high demand for sweet onions. When the Peru deal cleans up, Keystone will transition to Mexico. Dan said the Peruvian market continues to gain interest and notoriety due to the onions’ sweet taste and availability during the winter months. 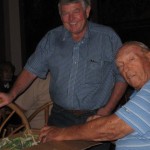 Photo of the week – Ed Mallett