California:
Gerry Valois with Western Onion in Camarillo said his company is shipping commercial onions out of King City now to primarily West Coast receivers, with some of the product also going to export markets in Central America. The company will not have its own acreage in 2017; Gerry said it will provide custom harvesting with its equipment, moving from the Imperial Valley to the San Joaquin Valley, Lancaster, Cuyama and then King City. Currently the market, he said, is “overproduced, which is evidenced with the open market pricing.” Gerry said, “There are just too many onions.”

Idaho-Eastern Oregon:
Dan Phillips with Central Produce in Payette, ID, reported demand has been better than he expected this week, but he noted that the week between Christmas and New Year’s Day is always slow. Dan said that transportation has been very difficult this week. “It’s not necessarily the weather, but the week between Christmas and New years is always tough because truckers want to get home for Christmas, and then they stay home until after the New Year.” He said demand should increase for the first two weeks in January. “It’s generally the same every year — there is a big push at the beginning, and then about the 20th it becomes the ‘Dog Days of January,’” Dan said. “We are going to definitely try to get the market up, but for some the late January dip in demand is seen as a market issue. It’s not. It happens every year, so we are still going to try to get the market up and see what happens.”

Chris Woo with Murakami Produce LLC in Ontario, OR, told us on Dec. 28 the demand is fairly light due to the holiday. He said shipping for the area is a “mixed bag this week.” He said, “Some shippers are keeping a full schedule while others are working part days, and others are taking the week off.” The market pricing has been steady, he said. Regarding the weather Chris commented, “While the cold weather has been good for the onions, keeping them dormant so they don’t wake up, the snow storms and low temps have made the roads treacherous. The trucks are having a very difficult time getting in for pickup and unloading.” He also said he anticipates next week the New Year’s orders will surge, and demand should be high. Shipments should rise as well. “With higher demand we are hopeful that pricing will also start moving upward,” Chris said.

New York:
Rick Minkus with Minkus Family Farms in New Hampton, NY, reported on Dec. 28 demand has been good this week. “We had very good demand at Thanksgiving, and it has seemed to carry through the holiday season,” Rick said. “Buyers are now restocking, and demand for our mediums has been very good.” Rick said the market has been fairly flat, and it’s hard to tell what will happen in the New Year. “We are still receiving pressure from Canada, and the U.S. dollar is just too strong against the Canadian dollar right now,” he said. On supplies Rick said that as with most New York growers, his operation’s yields are lower than in previous years. 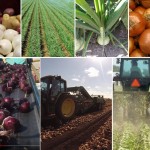 2016 Markets and Crops in Review