COLORADO, Western Slope:
Don Ed Holmes with The Onion House in Weslaco, TX, said his Western Slope Colorado deal going, and he noted that movement has been “fair and somewhat erratic.” Don Ed said overall business is good, and there is also good availability of trucks. “I believe this will be a shorter crop this year, and we could be done by late December,” he said. “We try to push hard going into the holidays because we don’t encounter the truck shortage that shippers further West have when Christmas trees ship,” he said.

UTAH:
The Onion House’s Corinne, UT, shipping season is expected to start early next week, according to Don Ed Holmes. “The onions are all in the barn,” he said on Oct. 19. “They should start running them next Monday or Tuesday.”

IDAHO-E. OREGON:
Dan Phillips of Central Produce in Payette, ID, told OnionBusiness.com that the market is down, and he said, “There are just too many onions industrywide. People are trying to get the onions they have outside out the door before the weather turns. On our end, we have good demand, and we are being selective about our sales to match our production.” Dan reported that Central was lucky to have completed harvest before recent rains and further reported that Central’s quality is excellent. In terms of the future, Dan commented that the holiday push may level the market out, but at this point it’s just too soon to tell.

Steve Baker at Baker Packing in Ontario, OR, said business at Baker has been “very consistent for the last three to four week,” noting with this consistency it’s surprising that the market has been dropping. “There are a lot of growers pressing to get their onions out of the field, which has been some of cause for the market to drop,” Steve said. “On our end, we are virtually done with harvest with only about 20-25 acres left to come in. So we really aren’t feeling that pressure.” He said that aside from the holiday push, he sees the market leveling off once the other growers are finished harvesting. “Once that pressure is off, we should see the market stabilize, and we can start selling onions at a profitable level,” Steve said. “One bright spot for us is that the recent news that Japan may be in need of imported onions may help the market.” He also reported Baker onion quality is very good to excellent, and he noted that Baker has all sizes and colors available.

CALIFORNIA:
Steve Gill of Gills Onions in Oxnard reported that they should be complete with harvest in King City around November 5. Gill reports has large size profile and great quality. “Our harvest out of King City has been for the plant and we really have no extra onions available for the open market out of the King City area this year.”

JAPAN UPDATE:
From the Agricultural Trade office in Japan we received the following update on Oct. 19:

Typhoons Damage Hokkaido Production
Heavy rains hit Hokkaido in August, damaging horticultural products, industrial facilities, roads, and railways. As Hokkaido is a major production region for Japanese onions, pumpkins, carrots and potatoes, market prices for these domestic products have seen an immediate spike. Accordingly, increased market opportunities may exist for foreign products for which there is a supply shortage. 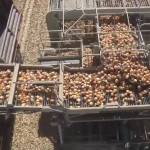 Video of the Week – October 27