Matthew Connelly: In produce industry, ‘You have to have a sense of humor doing what we do.’

After decades in this industry, OnionBusiness has defined what we believe is the most important common denominator in the industry: You gotta be able to laugh. OK, maybe not all the time and not at everything. But if you’re paying attention, like Matthew Connelly does, you’ll find endless opportunities to approach life – and work – with humor.

Matthew, who is senior buyer in the purchasing department of Thorofare, NJ-based J. Ambrogi Foods, joined the company in November 2018 after working in produce for about a decade in California. His father, Richard Connelly, “has been in produce for as long as I can remember,” Matt said, noting his own start in the industry was somewhat circuitous, with stints as a stand-up comic and work as a youth pastor.

“I grew up in Carmel California,” he said. “We moved there when I was three or four years old. Before that, we lived in Southern California where my dad had a produce company.” In addition to “sneaking around the warehouse and stealing cherry tomatoes,” Matthew’s early childhood included a seemingly permanent supply of “50# bags of onions sitting on our front porch, which I never thought was unusual until I realized most of my friends’ parents bought regular amounts of onions from the grocery store.”

At that early age, however, Matthew didn’t necessarily lean toward produce as a career. In fact…

“I went to school originally at William Jessup University to be a minister,” he said, adding, “I worked as a youth pastor in Rocklin, CA, for a few years.” But eventually, he said, he moved from the Sacramento area back to Carmel, where he got his “first real job in the produce industry as a purchasing coordinator in Salinas.”

And then he spent a few years doing stand-up, which Matt said is “a very tough lifestyle to live – making $18 a night for a 10-minute set wasn’t paying the bills.” He filled in with odd jobs, including cooking on the line in a local eatery and working in wine-tasting rooms.”

Then came a job with Pro Act in Monterey, “and that’s where I really started to love the industry,” Matt said. “I loved how fast it moved and how close-knit the people in the industry are.” For five years he was an account manager, working several Midwest and Canadian accounts. A promotion to the position of sourcing specialist gave him experience in items such as grapes, stone fruit, kiwi, mango and pineapples. 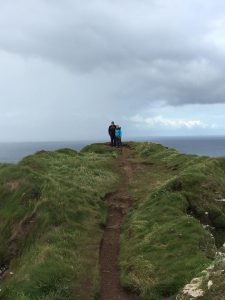 Along the way he became engaged to “a wonderful lady named Stephanie, and we are getting married in Carmel in August of this year,” Matt said. He added, “If the two of us are an operation, she is definitely the brains behind it.’

While learning more about the produce industry on the West Coast, Matt said, doors opened across the continent at J. Ambrogi Foods. A visit to the New Jersey operation made a huge impact.

“I was able to come and take a tour before starting, and I really liked what I saw,” he said. “I love that Ambrogi Foods is a family-run company, and that this is the fifth generation of owners. They are SQF certified, and the operations of the facility are absolutely top notch. You could tell immediately that this team here is a shining example of how a produce company could and should be run. I’m very excited to be here and grow my industry knowledge from a new perspective.”

But even his transition from West to East was not quite linear. He also managed to work in another passion. Travel.

“I moved from Monterey to the Philadelphia/New Jersey area with a brief stop in Ireland in between packing and moving. I packed my things onto a moving truck destined for Pennsylvania, flew from San Francisco to Ireland for two weeks, and then flew from Ireland to Philadelphia to start my new position. It was a very exciting (although chaotic) time,” he said.

“I love to travel. A lot,” he said, describing his trip to Ireland. “I love it there. There are cliffs and mountains to climb, wonderful music, friendly people, and despite it not being a ‘foodie’ destination, they really do have some wonderful and seasonal food.” And he explained that he’s had the wanderlust bug for years. For Matt, travel, humor and food all go hand in hand.

“When I was 23, I was able to go backpacking in Europe. I was mugged in Italy, got stranded in Holland, lost in Albania, drank beers with German laser scientists and attended a high-class English wedding that I wasn’t invited to. It was all a lot of fun.”

Now that he and Stephanie are at home on the East Coast, they’re dealing with the reality of climate. “We have two rambunctious dogs, Comet and Elvis, who made the move with us,” Matt said. “They still look at us like we are crazy anytime it snows. They are definitely more accustomed to the sand.”

But his own assimilation is smooth, and he said, “I am very excited to be joining a very talented group of people with tons of experience. My job is to purchase specific item classes that are then distributed to our customers. Besides that, we also purchase locally from the Philadelphia Terminal Market which we are fortunate to be so close to, and have so many good relationships established with.”

As part of the Millennial generation, Matt displays that natural curiosity of what, when, where and how – and he sees the produce industry being driven by that focus.

“I think the produce industry is really seeing a big marketing push to be transparent and show what is behind the curtain,” he said. “More and more you are seeing big companies producing excellent videos and publications (just like onionbusiness.com) to show the public where their food comes from.”

Not only do “people want to know where their food comes from,” he said, but in addition, “Hard-working farmers are really excited to be able to show just what it takes to produce high quality product.”

And our favorite vegetable is taking up more and more space on the landscape, according to Matt.

“Onions are particularly interesting yet completely underappreciated,” he said. “What cuisine doesn’t use onions as a base? French chefs even call it part of the ‘trinity’ of their cuisine. Consumers can sometimes take onions for granted, because it’s just such an easy item to pick up.”

But, he asked, “Have you ever been to a grocery store and didn’t see onions? There are a lot of hard-working people out there that make that possible.”

And if Matt Connelly can share some humor as he also works hard in the industry, it’s all better.

Although he took a break from stand-up for produce, he eventually “got the comedy itch back and started doing [stand-up] here and there when I had the chance,” he said.

“Eventually, once I get settled, I am going to start again here in the Philadelphia area. The source of my material all typically comes from real-life experiences. Actually, some of the least funny occurrences bring out the best jokes.”

He said being mugged in Italy was very funny. When he healed.

“I was mugged and beaten up by three men… and after the black eye faded, the story becomes much more entertaining when told on a stage.”

What about onions? “I don’t have any onion jokes at the moment, but I typically write about the things I encounter throughout the day, so now that I am buying onions full time, I’m sure I will think of something,” Matt said. 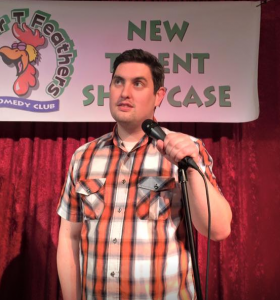 And he added, “As far as meshing humor with work, I think you have to have a sense of humor doing what we do. It’s a very strange industry we have here. There are very few industries that impact nearly 100 percent of the population, except for food, yet very few people actually realize how much chaos it takes to get a piece of food onto a plate.”

Proverbs 17:22 says, “A merry heart doeth good like a medicine: but a broken spirit drieth the bones.” Matt Connelly has his own take, and that is, “If you can’t laugh about some of the craziness that happens in produce, then I don’t know how you can show up every day. Laughing and making others laugh is therapeutic for me. It’s like medicine for your soul.”

Matthew Connelly: In produce industry, ‘You have to have a sense of humor doing what we do.’ was last modified: January 30th, 2019 by Onion Business
J. Ambrogi FoodsMatt ConnellyNew JerseyPhiladelphia
2
Facebook Twitter Google + Pinterest
previous post 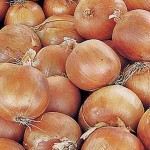 Market and Crop Update for January 17