A cleaner handling process and finished product for Bowa Onions in Waarde, a town in the Dutch province of Zeeland, was made possible this season through a dust extraction system designed and produced by Modesta in Putten, the Netherlands. Photos are included at the conclusion of the story.

The system’s installations, electrical control cabinets and software were produced family-owned Modesta in June. Modesta, which has been in business since 1949 and is now being led by the third generation. In addition to the agricultural industry, also focuses on woodworking companies and the recycling industry.

The June installation, according to Jozé Boone, who runs the company with his brothers, Dignus and Jan, “meant that the process of sorting and packing the onions was at a standstill for several weeks. Fortunately, the new harvest was a bit late, so we were able to start up again along with the start of the season.”

Boone said in an article posted at https://www.modestafilters.com/updates/a-cleaner-handling-process-and-finished-product-for-bowa-onions, “We want to work as cleanly as possible. But that is only possible if as little dust as possible gets into the production area and halls.” To that end, the company invested in a completely new dust extraction installation.

Each year Bowa processes “some 50,000 tons of yellow and red onions, which — once sorted and packaged — find their way to customers at home and abroad.” And Jozé said, “From the moment that the onions come in to when they go the final packing area, there are loose onion skins, dust and waste everywhere. This influences the product. And it’s certainly also not good for our employees and machines. It’s just more pleasant and healthier to work in a clean environment.”

The story said, “Because the capacity of the old extraction was too small, Bowa had to look for a new solution. As Jozé explains, ‘We quickly concluded that, for an optimal result, the entire performance of the production area must be addressed. Consequently, we came in contact with Modesta, and we decided to modernize the entire extraction of dust and onion skins as well as the disposal of the residual waste streams. With this project, we’re making an investment in quality for our product as well as for our people and machinery.’”

The story said the dust extraction project “started at the end of last year with analyzing the handling process. Here, attention was paid to where the product comes in at Bowa, where it leaves the production area and what the prevailing wind direction is, among other factors. Based on these observations, the most suitable positions for the filter system, extraction points and waste storage were determined.”

Sjoerd van Diepen of Modesta said in the story, “Extraction and residual streams are often overlooked, but they determine to a large extent the internal logistics of agricultural businesses. That’s why, starting with the design phase, we think about the disposal of dust and waste.”

And, the story continued, van Diepen for years had himself “worked at an onion processor — experience that has proved useful in this project. Sjoerd, along with his colleague Diederick Kloppenburg, was involved in the project from start to finish.”

It continued, “The first preparations for the installation of the new extraction and disposal system were made in the spring. These preparations took into account the current production building. While a section of foundation and wall were extended for the placement of the new filter cabinet, no further major adjustments were required of the building.”

Going on, it quoted Diederick, who said, “By extracting dust, onion skins and other particles and disposing of the residual streams, the new system ensures that the air in Bowa’s production area is continuously purified. However, the production facility and halls haven’t been renovated or enlarged, yet the installed extraction capacity has been expanded from 20,000 m3 per hour to 110,000 m3 per hour.”

And, the story said, “What has Modesta installed to make this possible? First, a filter system with multiple fully adjustable fans and frequency controllers. This resulted in using only the power that is necessary at that moment, allowing the energy consumption to remain as low as possible. In addition, the modular system guarantees operational reliability. If one of the fans fails, the rest continue to work.”

With the system in place, “More than 30 custom extraction hoods have been installed where the onions are in movement at Bowa. Using three enclosed waste scrapers with a total of 65 meters long, the waste and dust from the production halls are transported. The waste scrapers are connected to a compactor, which reduces the volume of discharged waste some 6 to 8 times. An extensive extraction has also been placed at the onion topper, from where the residual streams are directly transported to the compactor.”

Also, “A new type of wind sifter was also installed. This device blows air into a hood that has been specially designed for that purpose. This hood causes the onions to move, which enables it to separate and extract the lightweight particles — the onion skins and dust — from the product. So it’s a combination of blowing and extraction. What’s more, the advantage of this is the increased capacity and reduced wear and tear of the other machines in the processing line. Sjoerd and Diederick further explain that there has been much attention given to the climate conditions in Bowa’s building.”

The story said, “A good air balance in the factory prevents dust and waste blowing over to cleaner areas of the company, such as the packing line. That’s why an overpressure is created in the cleaner locations, so that the dust is less able to enter there. This results in a recognizably improved quality of the air. Less ‘gray haze’ is now hanging in the air in the production area and other halls.”

The story said that Jozé is “more than satisfied with the end result,” and he commented, “We have now been running it about eight weeks, and the difference is clearly visible. Even other people who visit us notice the clean environment. It is so much more enjoyable to work here. We also see a real difference in the finished product. In February, we purchased another packing line, but, because we already had the plans for the new extraction system, we removed all onion skins by hand until the new system was in place. It makes an enormous difference that we now have good extraction here. In any case, we are currently very happy with the new installation. In recent weeks, the onions have had a lot of dust and skins. The compactor fills up more quickly now, but that’s not a bad thing. Otherwise, we would have had more dust and waste in the production area and halls.”

Many thanks to Modesta and Nico Nieuwenhuize for sharing the photos shown below.

Focus on Logistics: Load Boards? Do They Affect Rates? 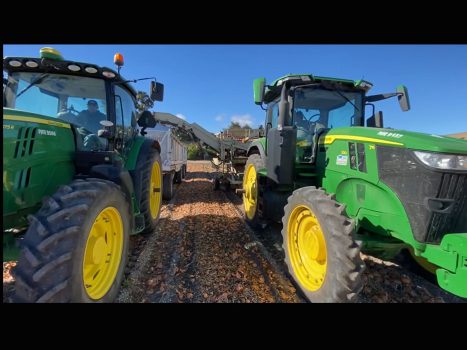