National Onion Inc. founder Steve Smith has been in produce since the late 1970s and in onions since 1982, firmly establishing his company as a major shipper/broker of onions out of Mexico, New Mexico and Utah as well as other production areas across the nation.

While he’s no stranger to the industry, he did come to onions under somewhat unusual circumstances, and his is a great story. It’s also one he shares with good humor.

“I grew up in Safford, AZ, straight east of Tucson,” Steve told OnionBusiness.com recently. But his younger years weren’t spent on a farm, and his family had nothing whatsoever to do with ag. In fact, his dad was a golf pro. And his mom worked in a hospital. Of the four siblings – Steve has three sisters and one brother – he’s the only one who went into produce.

Because, he said, “It was the only job offered to me when I left college.” Steve studied at BYU in the mid-1970s and met and married his wife, Paulette, in 1975. The couple has six kids now, and Steve said, “We’re still working on them.”

Because he spoke Spanish fluently, the young husband and dad landed a job selling tropical produce from Mexico for International Fruit Shippers and Growers in McAllen, TX. His knowledge of produce expanded with his first position, which ran from 1977 to 1979.

“Then from 1979 to 1982 I was a buyer for Pete Singh Produce in El Paso, working on the wholesale market,” he said. Pete Singh sold primarily to foodservice, providing a full line of product, and Steve learned more, and in 1982 he started National Onion Inc., a New Mexico corporation based in Las Cruces.

The initial operation was selling onions from Chihuahua during the summer, which worked out perfectly for Steve.

That’s because “I never could get golf out my system,” he told OnionBusiness.com. The first two jobs in produce didn’t leave a whole lot of time for the links, but he said, “After I started National Onion I sold onions from Chihuahua during the summer and played pro golf on the mini tour in the Southwest during the winter.”

“I came home one day and had played for a week on the tour and had a check for $35,” he said. “That’s when reality set in. I knew I’d better sell onions full-time.”

Today National Onion Inc., still headquartered in Las Cruces, also has a branch in Cedar Hills, UT. Steve said Chihuahua continues to be the mainstay for onion volume, and National Onion moves that product in May, June and July. The crop is 100 percent transplants, and fields are 100 percent drip irrigation, he said. 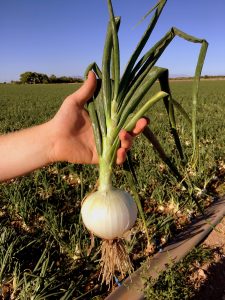 The Mexican onion production is from 1,000 acres and goes to the fresh market and foodservice, with one-third of the volume dedicated to onion ring contracts. “The growers go for single-center varieties and try to make jumbos,” he said.

“Chihuahua will start the first week of May, and right now we’re buying and brokering out of the Rio Grande Valley in Texas,” he explained.

National contracts with three growers in New Mexico who grow both onions and chili peppers. The onions run June and July, Steve said, and ship from a shed in Santa Teresa. Fields are also 100 percent drip, and the New Mexico onions are field-cured and bagged.

About varieties over the years, Steve said, “Companies develop good seeds for what we need. The growers handpick single-center varieties, and they last four or five years. Then the seeds are improved, and the growers go with the new ones.”

Both New Mexico and Chihuahua have two plantings, with the early Grano coming off in May and the intermediate variety coming off in June.

“And in Utah we work with a major grower/shipper, helping sell what they grow and pack,” he added. Those onions are cured inside, he noted.

Sons Micah and Luke work full-time with their dad, with Micah in sales and logistics and Luke in transportation and also handling a process jalapeño deal year-round.

Handling onions year-round, National also sources from the Northwest and provides product to a customer base mostly in Texas during the winter. “In the summer we ship to Canada and coast to coast in the U.S.,” he said.

Moving product from both sides of the U.S./Mexico border, Steve acknowledged that labor and trade agreements can be difficult topics.

“Labor sources continue to deteriorate every year,” he said. “It’s hard to find workers for harvest, and growers are looking at mechanical harvesters that don’t damage the onions. They haven’t found anything great yet, but hand labor is disappearing, and it doesn’t seem to matter if you pay more. It’s that way in Mexico, too.”

Still he sees the future of the onion industry as solid. “People are always going to eat onions,” he said. “As long as we can cover the U.S., we’ll be good. I think we’ll still have Mexican onions coming in, but one thing that’s happening is the cost of inspections rising, and that could cause hiccups and heartburn.”

National Onion, Inc. has BEAUTIFUL photos for viewing on their website.  Here is a link to their 2016 photo gallery: http://www.nationalonion.com/2016 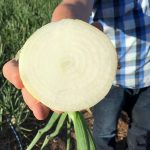 Market and Crop Update for March 30