An April 9 press release from the National Onion Association in Greeley, CO, highlighted some of the weather and supply issues facing the U.S. onion industry, saying the combination will “put the squeeze on the United States’ available onion stocks for the next few months.”

According to the release from Executive Vice President/CEO Greg Yielding, American growers normally “have enough onions in storage to last through the spring, while the spring and summer harvests get under way.” In 2019, however, “That’s not the case… as April supplies have dwindled 30 percent from the same time last year. April 1 stocks on hand sat at 6 million 50-pound units, down 61 percent in just one month. At current demand levels, onion storage will be all but nil by June.”

The release went on to quote Yielding, who noted a decrease in exports from Europe “coupled with shrinking supplies from Mexico and Canada, fewer acres planted and increased demand in the United States are making for these tighter supplies. Our nation’s growers will be working around the clock to continue to meet consumer demand. This could take another few months to balance out.”

In addition to strong demand, the tighter supplies are also the result of what the release explained is “increased pressures on onion supplies across the globe. A good 74 percent of the United States’ onion imports come from Mexico. Bad weather has hurt Mexican crops, especially, their coveted white onions.”

In Europe onion shortages “have put increased pressure on worldwide onion supplies, which have a ripple effect in the United States. Imports from Canada, which make up about 10 percent of the United States onion import market, also are impacted by this worldwide crunch.”

While spring and summer harvests draw near, acreage is reported to be down in several areas. California’s overall spring crop is down “25 percent to 30 percent in acres,” and this year’s fewer Texas onion acres have been slowed by wet weather, the NOA release noted.

Georgia has fewer acres as well, “about 20 percent — while harvest also is rather slow due to weather,” with Vidalias to ship starting April 22. 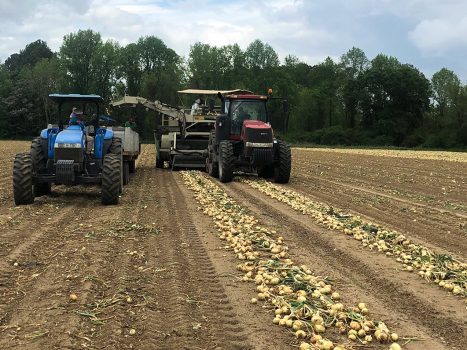