According to René Hardwick, director of public and industry relations at the Greeley, CO-based NOA, the idea to provide grower/shipper members with the video story-telling service came from Association President Doug Stanley.

“It was Doug’s idea for us to let consumers know the people behind their food,” René said.

And Doug added, “We’re trying to send a message to consumers at retail and foodservice to show the value of domestic production. It’s a benefit to our members, and it’s my opinion that we’ve lost our connection with consumers, and this is one way to reestablish it.”

Both Doug and René said the video messages are being kept short and to the point, with individual growers deciding on the video production format they want to use.

“The takeaway is that most growers today are multi-generational and practice sustainability,” Stanley said. He cited Millennials as a primary consumer target, noting, “They have the desire to know that what they’re eating is healthy and the product of sustainability.”

With that in mind, René produced a prototype video that was shown at the recent NOA Summer Convention in Bakersfield, CA. The videos are produced at no charge to members using footage they provide. Individual QR codes generated specifically for each participating member are printed on packaging or other collateral material, and consumers use those QRs to access the video on the NOA YouTube channel. The videos will also be on the NOA Facebook page, René said. There is a minimal charge for the QR, she said. 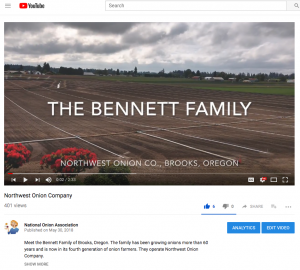 “We just started this,” she said, adding the announcement of the service is in the August NOA newsletter. “There are no real ‘rules,’ and the format can be anything the member wants. We do want to keep it short, two to two-and-a-half minutes.”

She added, “If a customer is at the grocery store and wants to understand a product, two minutes is probably worth it.” Click here to view NOA’s Bennett Family video. 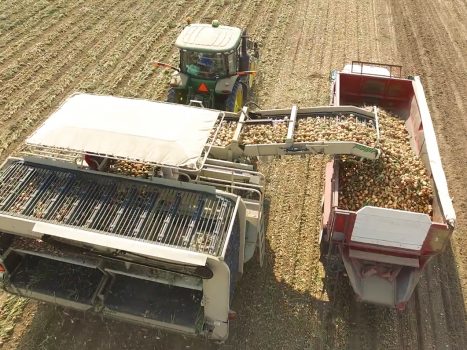 Skeen Farms in Nyssa, OR, Harvest Video of the Week