National Onion Association President Doug Bulgrin and Executive Vice President Greg Yielding made a recent tour of the Northwest, meeting with grower/shipper members in the Treasure Valley of Idaho-E. Oregon as well as in Washington and the Columbia Basin.

The mid-August trip, Yielding said, provided a good opportunity for the members to voice concerns about several industry issues, including the USDA’s suspension of the S. Texas Onion Federal Marketing Order earlier this year.

The ultimate fate of the marketing order remains uncertain, with the USDA issuing a statement in March saying the agency was coordinating with the South Texas Onion Committee “and with industry groups to ensure clarity on the handling regulations going forward.”

“If we lose the Texas marketing order, it’ll be terrible for the onion market,” Yielding said on Aug. 23. “It could open the floodgates for Mexican onions, Dutch onions, onions from everywhere.”

Yielding said he and Bulgrin saw the start of the harvest in both areas as “a good time to visit and talk over issues,” and he noted that while attendance at the NOA Summer Meeting in Nashville in July brought a good turnout, some members were unable to attend. The in-person visit to the NW by NOA execs involved approximately two dozen operations, Yielding said, and he added, “We were on the go from morning to dark for four days.”

In addition to the S. Texas marketing order, other issues tackled included the EPA banning of Lorsban/chlorpyrifos, a pesticide that had been banned during the Obama administration. That ban was overturned by executive order in 2017 under Donald Trump and reinstated this month by Joe Biden. Yielding said a letter from ag groups has been drafted and will be sent to Secretary of Agriculture Tom Vilsack and the EPA “laying out concerns about losing [the pesticide] through a court order and not by scientific studies.”

The membership also talked to the NOA execs about the ongoing labor situation, which Yielding said “is not getting any better.” He added that some members feel they’re doing OK with labor this year and “some not.”

In the technology arena, Yielding said the industry is “heading to more automation.” He said, “When the government is paying people not to work, all it’s doing is fast-forwarding automation by making it cheaper and advantageous to invest in technology.”

He said that the passage of the United States/Mexico/Canada Agreement has not helped the onion industry. “There were more onions coming in from Mexico than a year ago,” he said, noting that inspections were lacking. And that, he reiterated, goes back to the S. Texas marketing order.

“It’s one of the main reasons we need to keep that Texas marketing order,” he said. “They really need to revisit that issue.”

Transportation and various shortages were discussed. “We talked about freight rates,” Yielding said, adding that related topics included unfair practices by other countries and limits on storage freight time for ship containers.

“We talked about higher production costs now,” he said. “He went on to say that productions costs are higher than when members submitted production estimates earlier in the year.

“There are shortages of pallets and packing materials, and people don’t know when they’ll receive some things. And freight charges have gone up four or five times. It will take a while to get it all straightened out. Fuel prices will make it worse and last longer. There’s also a container situation, and shipping costs are the root of the big problem.”

And, Yielding said, he doesn’t have dates and exact location determined yet, but the 2022 NOA Summer Meeting “will be held in the Northwest.” More photos are below. 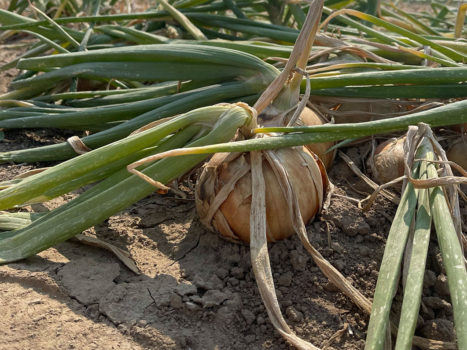