Testing took place at the Adams County Extension Office, and both trial sites were set up on farms owned by Bob and Robert T. Sakata. One site was north of Wattenberg (Struck location) and the other northwest of Brighton (Stieber location).

The report from Dr. Gourd’s office said, “In general, weather conditions were similar to last year, that is, cooler and wetter than normal in the spring followed by hot dry conditions in July through September. Onions were planted at the Stieber location on March 15 and at the Struck location on March 14, 2016. The Stieber location used flood irrigation and the Struck location used sprinkler center pivot irrigation.”

Both locations were subject to research evaluations that included emergence, thrips, pink root severity, maturity, yield and storability. “Onion emergence evaluations occurred on June 9 at the Stieber location and June 8 at the Struck location. Good emergence of the onions was noted at both locations,” the report said.

Harvest at the Stieber location took place on Sept. 16, followed by processing on Sept. 19. Harvest at the Struck location was on Sept. 27 with processing the next day. For all 2016 onion variety trial results in Northern Colorado, visit the Adams County Extension website at www.adamscountyextension.org. 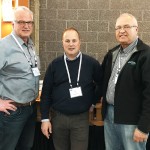