Dr. Tim Waters, WSU Area Extension Educator, told us that the Washington crop could be ahead of normal due to early heat, but the onions have suffered no ill effects to date. “Though it has been warm over the last couple of days, I haven’t observed that the heat has affected crops. It does appear that the crop could be ahead of normal, and much will depend on how growers manage irrigation. But early signs indicate that the crop is in very good shape,” he told OnionBusiness.com. Waters noted that so far it has been a busy season for growers, and they have experienced some weeds. “Growers have been doing a lot of hand weeding to control the issue,” Dr. Waters said, adding that this week he has seen numerous fields that are looking very nice.

Larry Baumann, owner of L&L Ag Production in Connell, said the Washington crop is “at normal stage right now.” Larry told us, “There have been reports of stand loss with the crop because of corn maggot damage throughout the Basin.  Some of the early over-winter crops have not performed well and will be a challenge. For our part, we will be starting in a normal time frame in August. It is hot right now, and we hope that this will not be the norm for the summer like last year.”

Jason Walker at Bybee Produce in Prosser said, “The crop is looking very good and progressing well.” Jason told OnionBusiness.com that Bybee had a very good spring and a good start to the summer, and he is optimistic for a good harvest and season. He said the season may get started a little early this year, but he also said it’s a mater of waiting and seeing how the summer progresses. At this time, Bybee anticipates starting up the third or fourth week of July.

Gary Atkin at Columbia Basin Onion in Hermiston, OR, reported that the company started packing over-winter onions June 8 and will begin shipping on June 9.  The over-winter yellow onion crop looks very good, Atkins said. Sizing is good on the first field and onions will be larger when Columbia Basin gets into its second field next week.

The rest of the crop is looking good, he said, and he noted the company is looking at a July start date on transplants with all colors. After transplants CB will start with its direct-seed crop. 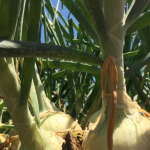