With the onset of summer and its oftentimes mixed bag of weather conditions, Northwest onion growers and shippers are in the “watch and wait” and “get ready” modes for the 2021 season.  Our comments below are listed in alpha order by region.

Reporting from his operation in Nyssa, OR, Paul Skeen with Skeen Farms told OnionBusiness on June 22, “It’s been a tough spring with wind, cold, and now record heat. Overall, we are probably a week behind on the crop. There are fields in the valley that look absolutely beautiful, and then there are fields that aren’t quite as good. I believe overall we should have an average crop in the valley.” Below are photos courtesy of Paul Skeen.

Also in the Treasure Valley of Idaho-E. Oregon, Tiffany Cruickshank with Snake River Produce in Nyssa sent photos taken by colleague Kyle Erstrom of the crop on June 22. Tiffany said the onions were looking very good, but she cautioned, “The upcoming heatwave has me concerned.”

Eagle Eye Produce’s Northwest onions come from Tri-Cities and Royal City areas of Washington and primarily the Oregon side of the Treasure Valley, and Jason Pearson told us on June 23 the crops in both regions were doing well. “The Washington crop looks very good,” Jason said, adding, “Over the last couple of weeks they’ve come on really good, and the winter-overs are coming up this week.” He continued, “We do expect some serious heat in the next couple of weeks.” Below are Washington photos courtesy of Eagle Eye’s Dallin Klingler.

About the Treasure Valley onions, Jason said, “Everything looks good as of right now, but there is that heat wave coming. It’s expected to get to 109F.” Growers are putting water on the field, he said. He noted the Treasure Valley’s crop is about 10 days behind.

Jason also said the twin issues of labor and transportation are not getting better. “Transportation is at all-time horrible level,” he said. But, he added, “We’ll get through it.” Below are Treasure Valley photos courtesy of Eagle Eye’s Dallin Klingler.

Ryan Bennett with Northwest Onion Company in Brooks, Oregon sent in his crop update stating despite a dry Spring and anticipated heat, his family’s onions are in good shape. “Here comes the heat!” he said. “Looks like we will be setting record temps this weekend as we climb into the low 100’s! We just set a record for the driest spring ever recorded. However, the onions are looking beautiful and progressing nicely. We still have great water and estimate the crop to be about 10 days ahead of normal; whatever that is anymore. Below are a few pics of what we see out here. My daughter Mya volunteered to help me change the water the other night. Nice to have such cute help!” We at OnionBusiness couldn’t agree more!

Larry Bauman with L&L Ag in Connell/Pasco, WA, weighed in on the crop progress on June 22, providing us with his “crop update from my perspective.” He said, “This year will be remembered for many years with the loss of the foodservice business, COVID 19 taking overall conversations, many webinars, working around the State of Washington’s many restrictions and new laws passed that will forever change small farms and the dairy business.”

He continued, “But from the farming side, the mild winter we had in the Columbia led to a major problem of volunteer potatoes.  Some growers have used spray applications to control them, and others put labor into the fields and pull the seed piece out of the ground.  Either way you handled the problem cost money in yield or in good yield and high labor cost.”

Larry said the pandemic has brought about significant shifts in the industry. He explained, “There are many things that are coming out of the pandemic, but the change in overland trucking and freight costs, coupled with the problems with the ocean freight container shipping and costs, will continue to put pressure on the return to the producer of the onions.”

He said of the crop, “Overall, the onions I have seen in the Columbia Basin look very good.” He added, “The next week of extremely high temps will have a negative impact on the sizing of the crop.” And, Larry Bauman said, “Remember July 4th!!! We all need to be thankful that the Lord God used great leadership in founding this country and pray that it will stay the UNITED STATES OF AMERICA.”

Below are onion crop photos near Connell, WA courtesy of Larry Bauman 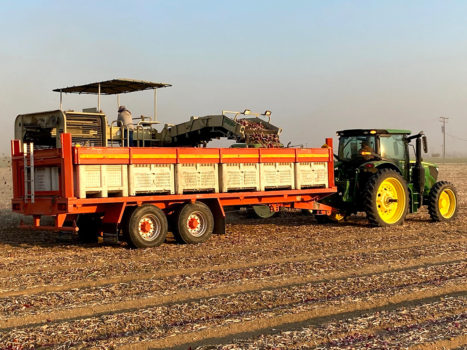