The OB team of Sherise Jones and Molly John were among the thousands of attendees at this year’s PMA in the Big Easy, and the two reported “the show floor was full of action with onion industry booths and attendees.”

Sherise said, “OnionBusiness.com was able to visit with many of the companies represented, and the response was favorable overall.”

While the majority of comments were very positive, Sherise reported that she heard a “few comments that the traffic may have been lighter than normal, and the layout was a bit disjointed with the Floral Pavilion set in the middle, dividing the produce companies.” She added, “There were also concerns that entrances were situated all to one side, and attendees had to walk long distances in order to reach companies.”

Still, she said, “Minor concerns aside, the onion industry reps’ general consensus was that the show was well worth it for reconnecting with customers and developing new opportunities.”

Shawn Hartley with Onions told OnionBusiness.com that the new name and logo were well received, and customers expressed excitement for the former Utah Onions new brand.

Volm Companies’ booth was rockin’ full steam with live demos of the new “UltraFresh” pouch baggers. Attendees were wowed by the fast-paced bagger action, and OnionBusiness.com will be bringing our readers the full details about this high-tech bagging solution within a few weeks. You won’t want to miss it!

Susannah Lanier, who was coordinating her last show for Shuman before she departs to be a County Extension Agent in Georgia, pulled out all the stops for the onion company in this year’s booth. Shuman had cooking demos and a terrific array of giveaways that drew big crowds to the booth.

Keith, Craig, Aaron and Jacob Fox, all familiar faces at PMA, demonstrated that family operations make it up-close and personal for Fox Packaging and Fox Solutions at the show. As the staple of “Texas Town” at PMA, the sons and grandson for Ken Fox had an over-the-top booth design used to connect with customers and network with new leads.

Easterday Farms had a beautiful onion display set beneath its famous red barn booth display. Jody Easterday told OnionBusiness.com that PMA was not only great for meeting customers, but the event also is valued as a chance to see all of the new vendor technologies. In particular, Jody said she felt that the transportation networking was a plus.

The USA Onions/Idaho-Eastern Oregon booth was staffed with shipper reps, which Sherise said “added a depth of experience and the opportunity to meet with a variety of shed personnel.”

Three spokesmodels handed out thermally lined bags to booth visitors, and OnionBusiness saw the bags throughout the New Orleans airport “on the shoulders of attendees returning home.”

Across the aisle from IEO/USA Onions, Grant Kitamura, Chris Woo and Jerry Baker long with Jerry’s wife Judy, operated the Baker & Murakami booth in the first-time exhibitors pavilion alongside Oregon Department of Agriculture.

Jerry Baker told OnionBusiness.com, “I was able to see a lot of folks, including some I hadn’t seen in years.” In addition to greeting customers, Baker & Murakami also ran a video showcasing the company’s new high-tech packing line.

Twenty-year exhibitor Sorma had a prime location at PMA and Sorma’s Kelvin Farris told OnionBusiness.com that Sorma uses the event to maintain existing relationships while developing new leads. He said that though onions have always been in their customer base, Sorma has increased its focus on the category.

Curry & Company had its signature bright red booth design that was easily seen from on the show floor, and new owners Aaron and Holly Ensign greeted customers with Executive Director of Sales Trish Lovell, who was accompanied by her husband Logan. Aaron Ensign said that PMA was an excellent opportunity for Curry to grow new prospects for the future.

Eqraft exhibited for the first time at this year’s PMA, and while they said they were somewhat disappointed with their booth placement being in the back of the hall, the team was still able to make great connections with customers and expressed that it was nice to be able to operate a booth at the show.

The Johnson family with Carzalia Valley Produce was in full force at PMA, with three generations represented. Chaddy Robertson, promotions director with Carzalia, told OnionBusiness that PMA is a wonderful time to say hello to old friends and to make new friends, too.

“As shown in our PMA photo gallery, the onion industry was well represented from shippers to suppliers, and all did a fabulous job showing attendees that onions are where it’s at!” Sherise said.

Gallery photos are listed in alpha order by company name. 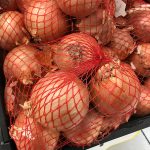 Market and Crop Update for October 26