OnionBusiness.com’s Sherise Jones was among the crowd of more than 20,000 attendees at the PMA Fresh Summit in Orlando this past weekend, and she had the great opportunity to visit with onion shippers and suppliers at the show.

Here are just a few of the booth highlights and some of the many photos Sherise snapped while participating in what PMA has announced was yet another record-setter for attendance. Great show, PMA!

– Fox Packaging/Fox Solutions team members worked their always impressive large booth. Owners and sales staff were on hand not only demonstrating their new pouch bagging system but also talking to guests about their array of cool products designed specifically for onions.

– Susannah Lanier, new marketing coordinator for Shuman Produce, led the booth promotion effort and packed in tons of activity for the two-day event. On Saturday, 2017 Miss America Savvy Shields drew huge crowds with both her beautiful appearance and her outgoing and engaging personality. Plus, the aroma of great food was a show highlight with Kevin Jenkins, aka The Fat Man, providing cooking demos and handing out samples.

– Considering themselves fortunate to have a prime location on the “Broadway” as part of the Washington State pavilion, Sunset Produce pulled out all the stops, sharing the signature company video and handing out full color canvas totes. Along with one of the owners, Rob Munn, and Sales Manager Brenden Kent, one the original founders, Robert Munn, was in attendance with his wife, Larna.

– Representatives at the IEO booth said that the event kept them very busy. Spokespersons in the booth were a huge hit, greeting attendees with signature totes, while shippers networked with many of their loyal customers. There was lots of #BigOnionLove promoted throughout both days of the event.

– Volm Companies booth made the most of their prime front-row booth placement and ginormous display, which OnionBusiness was told takes two semi-truck loads to haul to major shows like PMA.

– OnionBusiness.com met with representatives of Scantech Sciences who were promoting their proprietary food treatment systems and announcing the opening of their new McAllen, TX, facility. The opening is scheduled for the first quarter of 2017, and reps shared their excitement with renderings and photos that show onions both with and without their treatments.

– Wada Farms’ booth took on the excitement of a rock concert stage with signage that could be seen from nearly every angle of the show floor. The display came complete with an elaborate light show, interactive displays, company videos AND NFL football on Sunday.

– Bill and James Johnson of Carzalia Valley Produce worked their booth located in the New Mexico pavilion, offering networking with customers in an inviting and personal setting.

– The Potandon Produce sales team spread their presence between the Green Giant booth, where food samples with onions were flowing both days, and the Potandon Produce booth, which was complete with mini green house and large model crop dusters flying overhead. Some members were also at the Idaho-E. Oregon Onion booth.

– There were plenty of sales reps and Eagle Eye Produce staff to greet customers in their impressive booth that included a tall logo covered tower. The Eagle Eye group served up yummy onion and potato samples to the hungry crowd.

– Ray Farms offered up their warm Southern hospitality, and LOTS of family members were on hand to greet show attendees.

– Vidalia Onions’ Chef Lucas was a heart-warming and very effective addition to the Committee’s booth activities. “Food is love” is young Chef Lucas’ key message. He handed out samples of a MacDaddy recipe, while attendees were given an opportunity to write well wishes on a large, clear board in a promo designed to raise funds for the Make-A-Wish Foundation. The Committee also made strong use of its social media program by prominently displaying its hashtags, #FreshSummit and #VInspired 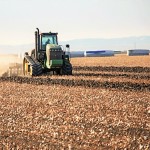