The Treasure Valley lost a respected and well-liked member of its onion community Oct. 4 with the unexpected death of Tom Corbet of Homedale, ID. Tom was a loyal supporter of OnionBusiness.com, and we express our profound condolences to his family.

In an online tribute to Tom at https://flahifffuneralchapel.com/tribute/details/150388/Tom-Corbet/obituary.html?fbclid=IwAR1iWJR6CanLDFSEPv_5Ideg2NUsKXkSfRpzWfhDNO19dq1VAv-gAZlk5Ow, Tom was lovingly described as a man of many talents and skills who put family first throughout his life.

Tom was born to Norm and Marie Corbet in Long Beach, CA, joining his brother Mike and later to welcome little sister Lisa.

“He grew up on the beaches of California,” the tribute said, adding, “He graduated from El Dorado High School in 1970.  In 1971 he went to the University of Idaho hoping to major in forestry. At that very same time his family moved to Donnelly, ID.  He then quit school. His father purchased the Texaco Station in Donnelly, and Tom moved there to help. He, his dad and his brother helped to build a cabin that still stands today.”

Early in his career Tom worked with Smith-Kangas surveying company and surveyed many subdivisions in the McCall, Donnelly and Cascade areas. In addition, “He traveled to Montana to survey, extensively doing mining claims. Many great stories came from those years.”

In his spare time, Tom loved skiing, fishing, camping and riding his motocross bike in the hills of McCall. “These years brought him many fond memories and were known as some of the best years of his life.”

On Valentine’s Day 1978, 25-year-old Tom “came off the ski hill and stopped by Lardos, like every other winter day. Meeting for beers with Rand Hart (his future brother-in-law) he was introduced to Leslie Ann Batt. He ignored her at first, and she fell head over heels for him, mainly for his sense of humor.”

Then, “He fell in love with her that same night.” The two became inseparable, as Tom showed Leslie “the back roads, back lakes, logging roads that went nowhere and the best fishing spots of McCall,” and they eloped to Lake Tahoe, NV, on Aug. 20, 1978.

Tom continued to work at Smith-Kangas in Boise, and the young couple’s weekends “were still spent at her parent’s condo in McCall fishing and going to Lardos.”

The tribute continued, “In June 1979, they were blessed with a daughter, Lindsey Nicole. She had her daddy’s heart immediately, and he doted on her. Walking around he would sing funny songs he made up for her. He had many cute names for her, but his favorite was Lindsey Binsey. He was so proud of her and loved her deeply.”

Lindsey married Josh Love in 1999, and they gave Tom and Leslie two grandsons, Jace and Rylan. Tom “never missed any activity they were in regardless of where it was or how busy he was. Family was everything. If you knew Tom, you knew his family.”

In March of 1982, Tom and Leslie welcomed their son, Jacob Thomas. “He was so happy to have his son,” the tribute said, “He had one of both, and in his eyes, they were perfect! He followed Jake in all his many sports he participated in. In 12 years, he never missed one game.”

Jake married Suzy Hamner in 2015, and they were blessed with Hannah and Maddy and later baby Brenden. “Jake joined the railroad in 2011 and Tom was so proud of him and his work ethic,” the tribute continued. “He loved to talk about Jake’s career.”

In 1981 Tom and Leslie moved from Boise back to Wilder “at the suggestion of Leslie’s dad, Phil. Phil wanted Tom to come out and farm for him. Tom didn’t plan on staying but soon learned he loved the ground, loved the process and talked with God while irrigating. He ended up staying for his lifetime and found his true passion in farming.”

From that time, “his children have many fond memories of walking the ditch bank with him, changing water or riding with him in the combine.”

In addition to family and farming, Tom also really loved racquetball and “played almost daily at the club up until this spring.”

Stories of the games “and the bruises he came home with were a highlight of his day,” and the tribute offered a “special thank you to Ryan Buhler and John Deroin – he enjoyed their competitive games and friendship immensely.”

Most of all, the tribute said, Tom “loved his kids, grandkids and wife more than anything in this world.  He was the family rock. He and his wife separated in 2008, but they lived within 10 miles of each other, remained best friends and their love grew stronger. They continued to do everything together. As a last gift to wife, he took her and Rolex to the Oregon coast.”

His family “will miss him more than words can say… He was a humble, kind-hearted, hard-headed, hard-working, ethical man wrapped in a gruff exterior. He was always on the side of the underdog. He had a quick wit, a funny smile and a touch of sarcasm and he always thought he was being clever. He usually was.”

Tom Corbet is survived by his wife of 41 years, Leslie Ann; his daughter Lindsey (Josh Love); his son Jake Corbet (Suzy); his grandchildren Jace and Rylan Love and Hannah and Maddy Schelling and baby Brenden Schelling. He is also survived by his sister Lisa; his father-in-law Philip E. Batt and wife Francee; his brother-in-law Bill Batt and wife Cathy; his sister-in-law Rebecca Batt; and numerous nieces and nephews. He was preceded in death by his grandparents, his mother and father, his brother Mike, his mother-in-law Jacque and his brother-in-law and lifelong friend Rand Hart.

Daughter Lindsey remembered her father with this loving post on Facebook with his photo, saying, “I love this picture. He loved my boys fiercely… I’ve thought about all I want to say, all the things he was to me. How I had the best childhood. How hard he worked, fingers always taped. How he taught my brother and I to work hard but live simple. How I once caught him sticking rolls in his pocket at the FFA banquet and we both laughed… I’m not sure how I’m supposed to say in a few words what my dad meant to me and my boys… I believe that this is his heaven and Baba O’Riley is playing in the background.”

And son Jake wrote, “Thank you Dad. Thank you for always being there for me, thank you for teaching me how to deal with life when it just refused to play fair. Thank you for showing me how to take care of a family and be a provider. Thank you for showing me how to be hard enough to put fear in another man while being soft enough to cry with your youngest at a Disney movie. I’ll never be able to thank you in person, but I think way up there you know how gracious n blessed I feel for having you as my dad. You will be unbelievably missed but just know your family will be taken care! You taught me well. I love you Dad! Not a single day will go by where I don’t think of you and all you’ve done for me. Thank you!”

Funeral services will be Friday, Oct.11th at 10 a.m. at Flahiff Funeral Chapel in Homedale, with graveside services in Wilder to follow. Condolences can be given at www.flahifffuneralchapel.com. 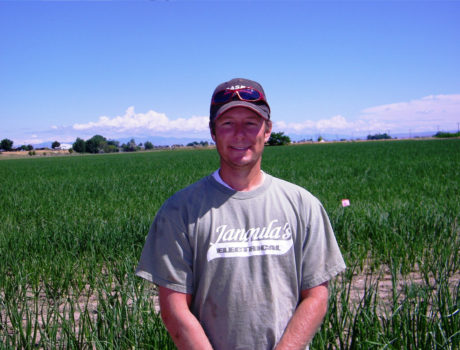