Onion hacks all around the house

We thought Household Hacker’s DIY video charging an iPhone with a Gatorade-soaked onion was pretty cool, and then we found this site: http://www.care2.com/greenliving/14-surprising-uses-for-onions.html.

Here are 14 more clever ways to use onions inside and outside.

We’re also told in 5. that rubbing onions onto burns “helps soothe the pain.” Easy does it on the rubbing, we think – and we wouldn’t do this with anything other than a very minor burn at that.

This one, 6., sounds legit: “Have a splinter that just won’t budge? Try taping (yes, with tape, or a adhesive bandage) a piece of raw onion to it. Hold tight for about an hour before removing the onion.”

You can also use onions to polish metal, according to 7. “Slice onion and then crush it. Combine crushed onion with water. With a cloth, dab it on the metal surface. Rub until clean.”

Number 8. tell us we can get rid of  “that paint smell” with onions. “The same mixture described for polishing metal works great for combating the unpleasant, and sometimes unhealthy, odors of paints and varnishes.”

Use the mesh bag that your onions came in to clean your sponges, 9. Says. “The mesh is a perfect tool to clean all that gunk that builds up on sponges. Cut it up into smaller pieces for best results.”

On the patio, refer to 10. to clean your grill: “Chop an onion in half, and turn on your grill. Using a fork, glide the onion on the grill to scrub it clean.”

If you’re needing to dye something yellow or brown, 11. comes with instructions to make a DIY dye by placing the skins in nylon panty hose, tying the top shut and boiling in a pot of water for 20 minutes. Maybe dye eggs?

If you burned your rice, 12. comes to the rescue. “Simply place half of an onion on top of the rice. It will absorb the burned taste.”

Holy guacamole! Onions can preserve avocados, says 13. Use a red onion, it says, and place half of it in a container, skin side up, then the avocado on top. Put red slides on top of already prepared guac to keep it from browning.

And 14. gives us a great recipe for “the ultimate oniony eggs” at  http://www.apronstringsblog.com/onion-ring-sunny-side-up-eggs-sauteed-onion-as-a-ring-mold-for-eggs/.

Retail Snapshots for May 26 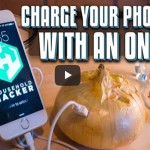 Powerhouse Onions – Great on the table and as emergency device chargers