Onion News from the Western US

Central California: Unique situation this season with inconsistent sizing caused by weather. Onions started out smaller and got bigger.  Brandon Calandri of Calandri Farms estimates 90 percent of shippers will finish 10 days to two weeks early, with two major shippers with long-term storage shipping into November. Calandri said the reason for the early finish is the season started 10 days to two weeks earlier. He also said it has been a good market season with good demand and good prices, so there was no sense to hold on to product. And Calandri said that contrary to what previous reports have been, in his opinion the crop was only off 8-10 percent this year as opposed to reports from the Westside Water District that stated percentages three times higher. Bill Trask of Baker Packing said the Oregon-based company’s California operations have seen inconsistent size in the last several weeks.

Columbia Basin: Gary Atkin, general manager at Columbia Basin Onion in Hermiston, OR, said his company has been running since July 27 and he believes that nearly 75 percent of shippers are packing and shipping from Hermiston/Pasco area and up north. Atkin said earlier in the season he was seeing smaller size, but now they are coming in bigger. Growers have done a lot of night harvesting to preserve the onions’ quality, and he said quality is good.

Colorado: A cold, wet spring put Colorado’s onions behind by a week to 10 days, and according to Bob Sakata of Sakata Farms in Brighton, CO, transplants will start harvesting in late August, followed by seeded onions after Labor Day. Sakata said he’s heard all onions in the state look good, although production has gone down in recent years. The crop is “very, very good quality,” Sakata said. 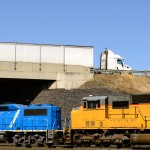 Are there more onion transportation ‘whoas’ down the road?