Organic onions show increase in demand and supply So who’s driving the bus? And where’s it headed?

U.S. Ag Census figures lend ink to what the produce industry has long known: Organics are growing both in demand and in supply, due in part to the preferences of Millennials.

But Bookend Ages, Gen Xs and Boomers on the high end and Zs on the lower end, have their influence as well.

While the organic category has grown significantly at the retail level, foodservice has not seen demand escalate at the same rate. All-organic eateries obviously cater to a specific consumer set; notably, there has been a rise in organic items available in deli and process value-added items.

Two major domestic onion operations shared information about their organic programs with us, looking at both foodservice and retail. Gills Onions in Oxnard, CA, told us that in the process side of the industry, it answers demand with onions grown by partner farms. Vice President of Sales and Marketing Megan Jacobsen said, “We sell certified fresh-cut processed organic onions. Although processed at our Oxnard facility, we do not grow our own organic onions. But they are 100 percent USA grown! We have wonderful partners that supply our organic onion needs.”

Although demand for certified organics is on the rise, “Demand for conventional onions significantly outweighs the demand for organic onions,” Mindy said. “So, although more retailers want to offer organics, that offering remains a small percentage of their overall onion shelf space.”

She said, “Today our organic sales make up about 10 percent of our total onion sales by volume.  We will continue to increase our organic production and keep up with our customer demand.  As the category grows, we are positioned to grow.”

Because Peri & Sons focuses on a premium onion product “that’s perfect for the retail environment… foodservice remains a small piece of our overall business,” Mindy said. “Generally, we don’t have the varieties or grade that is typically sold to food service.

We asked who’s driving the organic bus generationally and demographically, and Mindy said, “From what we’ve gather, it’s a complex topic that’s in continual flux. In general, there are many different reasons why consumers do or don’t purchase organic products. There’s a small segment that is fully committed to all things organic. But, the bulk of produce shoppers are picking-and-choosing between organic and conventional products. Some are invested in organics to protect their children’s health and wellness. Others are choosing organics to promote better overall health and longevity. Add to that issues such as education, health, income, culture and environment, which all have an impact on organic purchase behavior, and pinpointing shoppers becomes more challenging.”

Peri & Sons “is a one stop shop,” and Mindy said, “We can service our customers’ conventional and organic needs in a variety of pack styles and sizes.  Our ability to offer organic onions has not only increased our organic volume, but it has grown our conventional volume as well.  Retailers move to our program because they can get everything they need in one stop.  An important factor in battling the challenges of high transportation costs.”

And, she said, while organic onions are an important component of the Peri & Sons product mix, the company has not seen the double-digit growth in the category that other produce commodities such as blueberries have experienced.

“Retailers want to offer organic onions, but it’s not taking over the category,” Mindy said.

Indeed, all those observations were backed up by an overarching survey released in 2016 by the Organic Trade Association. Covered at https://www.drugstorenews.com/center-store/ota-survey-millennials-lead-other-age-groups-organic-purchasing-trust/.

Another study released last year and published at https://www.organicauthority.com/buzz-news/organic-food-reaches-30-percent-of-households-new-report-shows indicated nearly a third of all households in the nation consume organic foods, with a corresponding 5 percent increase in the number of shoppers specifically purchasing certified organics over the past seven years.

Both these reports covered all food items, but not surprisingly produce is the most-sought organic item, and the more recent story noted produce is the “gateway” into other organic food sales.

It’s worth noting that in terms of dollars and cents, back in 2012 the USDA reported that sales of organic food in the U.S. came to an estimated $28.4 billion. — over 4 percent of total food sales— and the prediction in 2012 was that sales would “reach an estimated $35 billion in 2014…”

The increase actually has been a bit more dramatic than expected, with the OrganicAuthority.com story ratcheting those numbers up several notches last year: “[All] Organic food currently represents a $43 billion industry in the United States and $77.4 billion worldwide. A report released last year by Grand View Research estimated that the global organic food and beverage market was poised to reach $320.5 billion by 2025.”

Definitely, the most useful information for our purposes is the USDA’s crop-specific data presented in October 2017 in the 2016 Certified Organic Survey at https://www.nass.usda.gov/Publications/Highlights/2017/2016_Certified_Organic_Survey_Highlights.pdf that said, “U.S. farms and ranches sold $7.6 billion in certified organic commodities in 2016, up 23 percent from $6.2 billion the year before. Of 2016 sales, 56 percent was for crops ($4.2 billion…”

The USDA also segregated numbers and narrowed them down to certified organic onion farms, acres and dollars in the Ag Census. The link is https://downloads.usda.library.cornell.edu/usda-esmis/files/zg64tk92g/70795b52w/4m90dz33q/OrganicProduction-09-20-2017_correction.pdf, and onions are on pages 16-18.

Joshua Bates, onion statistician with USDA National Ag Statistics Services told OnionBusiness.com, “Organic onion production in 2016 totaled 1,038,112 cwt, up 10 percent from 2015 and up 84 percent from 2014.” Joshua provided us with additional statistics at https://quickstats.nass.usda.gov/results/EDF34AF6-ED2E-37A2-8205-A5EADC34AF49, giving value for both fresh market and processing.

Mindy said as far as demand in foreign markets, Peri & Sons is seeing “an overall increase… but not at the growth rate the USA is experiencing. International customers are still very price-driven.”

One key factor in any onion story is Mother Nature, and as for the current season and Peri & Sons’ program, Mindy said, “Our organic onion program in California has had its challenges due to the lack of available organic farmland and drought conditions.” She went on to say, “We are fully committed to our California organic program, and we think that we’ll have a better ‘in-stock’ position throughout the 2019 season, which runs through August. Our plan is to close the supply gap between our California and Nevada seasons, and we look on track to do that.”

In conclusion, an important upshot of the continued growth of organics is funding from the U.S. government for organic producers, both for research and for transition of farmland from conventional to organic production. The link to research funding is https://nifa.usda.gov/funding-opportunity/organic-agriculture-research-and-extension-initiative, and for more information on transition, click on https://www.nifa.usda.gov/funding-opportunity/organic-transitions-org. Application deadlines are coming up quickly in May.

Madison-Cox Onions will kick off production in ’19 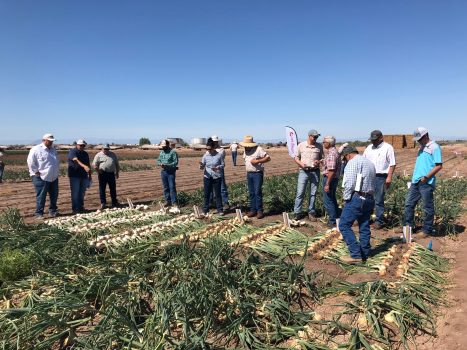