When the first freighter, a Chinese container ship just shy of 1,000 feet in length, became the first official vessel to pass through the newly expanded Panama Canal on Sunday, June 26, bands played and onlookers from around the globe cheered.

On June 28, at a transportation meeting in Ontario, OR, attended by Idaho-Eastern Oregon onion industry members, concern was voiced that such enormous ships, which carry more cargo at reduced freight costs, could well increase onion imports to the United States.

According to a June 27 USA TODAY story, “Bigger ships: Panama celebrates opening its expanded canal” by Rick Jervis, stats indicated the expansion has nearly tripled the capacity of the canal. Ships once “restricted” to carrying 5,000 containers will now be able to accommodate 14,000 containers.

The $5.4 billion expansion of the 102-year-old canal took nearly 10 years to complete, with some 40,000 workers involved in the project, and Jervis wrote, “The new set of locks now allows ships carrying up to 14,000 containers, known as neo-Panamax ships, to cut a quicker path between the Atlantic and Pacific oceans. U.S. ports have been investing billions of dollars to expand their facilities in a race to accommodate the mega ships.”

The cautionary note raised at the Ontario meeting, where onion grower/shippers gathered to discuss the possibility of establishing a Regional Intermodal Transportation Hub in the Ontario/Nyssa/Vale area of Eastern Oregon, came from Dirk DeBoer of DeBoer Farms in Nyssa. He noted that Peruvian onion imports have tripled in the last three years, and he said it is likely that imports will continue to increase with the expansion of the canal.

DeBoer said that with the expansion, imported onions can reach the East Coast at an average of $2,000 per load, while a load of onions traveling from the West Coast to receivers on the East Coast averages approximately $6,000. 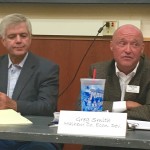