A change in venue for the 2016 PMA Foodservice Show from the Portola Plaza, which is undergoing renovation and construction, to the Hyatt Regency Monterey Hotel & Spa in Monterey, CA, didn’t cause so much as a slowdown in attendance. In fact, PMA reported a record turnout for the event.

OnionBusiness.com was among the attendees, and we found many companies that included onions in their booth stuck to the tried and true marketing techniques of displaying only onions, or, in some cases, including onions in the variety of produce items they offer.

Wada Farms utilized a new and very cool techy system in its booth, with two interactive iPad Pros providing tabs that allowed visitors to access info on the varieties of onions offered as well as details about the company.

First-time exhibitor Owyhee Produce chose a unique route to highlight its onion program. With a focus on its own mint oil, Owyhee offered mint lemonade and mint candies in the booth, communicating a new product line that provides a great way to eliminate “onion breath.”  The innovative promotional twist caught the attention of PMA contest officials, and Owyhee Produce was awarded “Best Booth of the Show” award. Congrats!

The Hyatt Hotel itself also got in on the onion action by featuring an amazing restaurant menu item, a meat-lovers’ pizza liberally topped with onion rings. The dish was a hit with show attendees who took a break to enjoy meals at the hotel.

The comments we heard from onion exhibitors were all favorable, with nearly everyone saying the show was a success and, yet again, they were able to connect with customers in an up-close and personal way.

Check out photos from the event! 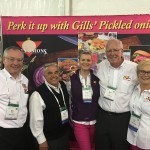