The Treasure Valley has come alive with 2018 onions going out the door, and Corey Griswold with ProSource Inc. in Hailey, ID, told us on Aug. 15 that Golden West hit the ground running on Monday, Aug. 6. 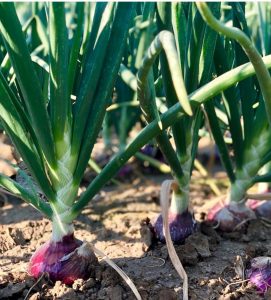 “Our volume is gradually ramping up, and we plan on being to full production with all colors next week,” Corey said. “Our onion crop is on schedule with sizing, and projected yields look to be on par with our historical average.”

As the new crop comes in and goes out, Golden West is seeing the upgrades at its 2017-built facility being put to good use.

“The following improvements have been added at the Golden West Packing facility in Parma,” Corey said. “We’ve increased our buffer hopper capacity from 12 bunkers to 16 bunkers, each holding approximately 13 tons of graded and sized product to be sent to a variety of packaging machines. We’ve also doubled our overall automated bagging capacity, from two Eqraft auto baggers to four machines, one of which is supplied by Volm.”

In addition, the carton packing capacity has been increased by 50 percent, going from two carton lines to three automatic lines. And we’ve added a Tolsma-Grisnich binning and bin dumping line and temporary ventilated storage bay, to more efficiently pack product to order and on demand.”

The new shed also has an expanded Volm consumer packing line, “doubling our capacity with an integrated automated master baler. We also installed a wicketed 10# machine for additional speed and is fully integrated into the consumer line. And we installed a fifth Volm weigher that can handle large product more efficiently and paired it with our onion stickering and carton/RPC/auto bagger line.”

The shed also has 50 percent more automated stacking/palletizing with the installation of a third Symach palletizer, to accommodate the new Volm weigher and consumer line. And Golden West put up a new 40,000 square foot refrigerated cold storage on-site, which will store 17,500,000 pounds of onions for late season packing.

The site is undergoing a beautification project, Corey said, with crews adding full landscaping and a flag pole assembly in front of the packing facility.

With the upgrades comes the announcement of Golden West/ProSource’s new hire, Antonio Carone, as director of food safety and facilities manager. Antonio, who came on early in 2018, “is responsible for the record keeping and maintenance of food safety documentation of Golden West Produce, GW Farms LLC, its contract growers, and ProSource’s suppliers, and fulfills all customer requests for information pertaining to our programs,” Corey said. He added, “He has been a great addition to the team and has developed a user-friendly interface module to collect and store important documentation.”

Corey said the company had a great summer onions’ shipping season and extended his thanks to Rio Valley Onions and Winter Garden Produce.

Onion trials held across the nation in August 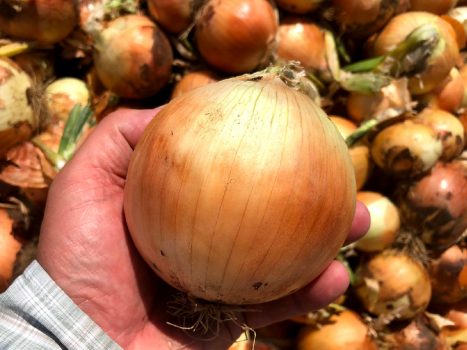