Recent Nevada weather snarls traffic in and out of Yerington

A clearing and warming trend in the Yerington-Reno region is welcome news for Peri and Sons, according to Cindy Elrod.

“We’ve had a lot of snow and rain, and Reno is flooding,” Cindy told us on Jan. 11. “Yerington is under flood warnings. We’re having weather issues all around us, and we’re having trouble getting trucks because the roads are closed. Schools are closed as well – it’s a massive storm.” She said Interstate 80 has been closed because of the storm, and roads headed south out of Yerington through Bishop have also been closed because of high winds.

“It’s all over the West,” she said of the heavy snow, high winds and breaching rivers. “We needed the precipitation, but not all at once.”

Reporting from the company’s satellite office in Portland, Cindy said the Oregon city had gotten 12 inches of snow and was “shut down” as a result.

“Yerington got some snow today, and it’s been windy too. But the forecast is looking decent, with temps reaching the 40s today. It’s been pretty wicked the past few days, though,” she said. 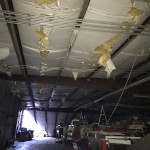