Reduced assessment seen as advantage by many IEOOC handlers

It’s official. A reduced assessment from 10 cents to 5 cents per cwt for onions handled under Federal Marketing Order 958 was formally adopted by the USDA the first week of December.

The marketing order created the Idaho-Eastern Oregon Onion Committee in 1957, which represents more than 200 growers and 30 shippers in Southwestern Idaho and Malheur County, OR. In addition to authorizing grade, size and pack regulations, the marketing order has also authorized production and marketing research projects as well as marketing promotion. In 1967 a promotions subcommittee of the IEOOC was formed.

One major effect of the recent reduced assessment was the disbanding of that promotions committee in July 2015. The assessment had gone into effect July 1, the start of the committee’s new fiscal year.

A new promotions committee was formed, with Grant Kitamura, IEOOC member and an owner of Murakami Produce, chairing.

In explaining the changes in the marketing order and in the promotions, Kitamura said, “Many members – a majority of the handlers – were interested in reducing our promotion efforts, which would in turn allow each shed to more aggressively promote their own company’s labels and programs with the money saved by lowering the assessments,” he said.

He also said the immediate effect of the reduction was internal.

“To many outsiders there is no difference [in IEOOC activities] because the reduced committee budget still allows for participation in produce shows, and there is still an ongoing media campaign,” he said. One primary difference brought about by the reduced assessment is in produce show travel costs for members, which he said the committee had helped to fund.

“In the past, the committee helped pay for travel to the produce shows, and now each company must bear the cost of sending their representatives.”

In addition to continuing its media advertising and visibility at the trade shows, the IEOOC is also maintaining its visibility in social media on Facebook and with a recently released YouTube video that shows the investment members make in onion production from “Seed to Harvest,” produced by Blake Brenan.

Kitamura said the overall impact of the change in the marketing order has been positive.

“I will say that the reduced funding for promotion has not hurt our efforts, and many of the handlers realize the advantage of more aggressively promoting their own companies and products,” he said. 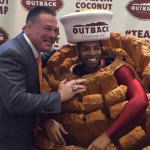