It’s a much different world than early 2019, when we first visited with John Rietveld of Rietveld Equipment in Illinois.

John, who has had generations of onion production experience passed along to him and who also has spent more than 20 years in onion/garlic equipment distribution across the United States, expanded his operation last year to include on-hand supplies of equipment and parts, which eliminated lag time between customer orders and equipment being up and running.

Since that expansion, much has transpired in the industry that has affected not just John and his company but also others – from producers to consumers. There have been meteorological events like major storms, fires and the like. There have been changes in trade agreements.

And there has been the COVID-19 pandemic, which necessitated a whole new set of changes and ways for Rietveld to service customers in person but with cautionary social distancing.

Because Rietveld Equipment is part of an essential industry – keeping the nation fed – John said getting to his customers was of paramount importance. And air travel was initially very limited.

So, the company bought a large motorhome, converted space to parts and tool storage and began.

“We purchased the RV last spring when the COVID pandemic was shutting down travel options, including restaurants, hotels and airlines.”

Necessity is the mother of invention, and John said it’s worked out beautifully. “The RV has worked great for our machine installations,” he continued, “We are able to stay as long we need to without changing travel plans with rental car agencies, hotels or airlines. If we get done sooner, we just pack up and leave without any ‘change fees’ or availability hassles.”

The servicers can also adhere to COVID protocol with individual space provided to the team members inside the large RV and proper distancing between team and customers on the job sites.

John told OnionBusiness on Sept. 14 he’d lived in the RV for a total of 31 days since the company bought it, with one of the periods lasting 10 days.

“Our territory is the entire U.S., so we schedule installations accordingly,” John said. Stops have been made in Kansas, Arizona, Southern California and the Central Valley. “It’s pretty nice and very handy for what we do,” he said.

Currently there’s a team in Arizona for an equipment installation, he said. “We’re on the go all the time.” “We have a full set of tools in the RV, including a small welder.”

Aware in the early weeks of the pandemic that interstate travel was restricted in some areas, the team made sure all paperwork was in order for the Department of Homeland Security if they were stopped on the road. “We were never stopped, but we were prepared to show that we are an essential occupation,” he said.

Rietveld Equipment is a distributor of Allround equipment and does installations nationwide, John told OnionBusiness in 2019. Equipment and parts are in stock in Illinois, allowing quick service to customers. And today, when orders of any kind come in, “We have the RV to answer calls,” he said.

In addition to the Allround topping and grading equipment, Rietveld Equipment also distributes Meconaf Dust Extraction and Protec Optical Sorting, with the ability to offer complete lines to its U.S. customers.

Certified installers and technicians are available at any time, and custom design is also part of the service. The parts that will be kept in stock are mostly universal – onion toppers, bulk tippers and box fillers. The company’s website, www.rietveldequipment.com, provides a thorough look at equipment available through the Illinois outlet.

And the RV service, John said, “has worked out so well that we don’t plan on changing the service, even when things get back to ‘normal.’” In fact, he said, “I’m not sure we won’t be getting more RVs.”

For onions, it’s been a busy summer 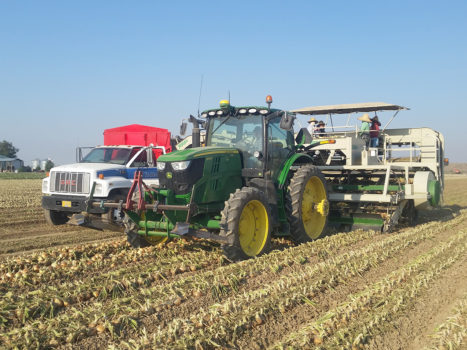