Ronda Faye Bybee, the wife of Fiesta Farms’ Garry Bybee, passed away at her Nyssa, OR, home on June 19 after a short battle with cancer. She was 75.

Ronda is survived by her husband of 55 years, Garry Dee Bybee; son Todd (Lynn) of Portland OR; son Marc (Tamara) of Nyssa; and daughter Misty Bybee (Travis Page) of Nyssa; and by brother Lanny Buttars of Salt Lake City; Scott Buttars of Portland; and sister and Joni Axtell (Thomas) of Logan, UT.

She was preceded in death by her parents and great-grandson Oliver Jackson Berdowski.

Born June 27, 1943, in Logan, (Cache Valley) UT, Ronda was the oldest of four born to Ronald Vernal Buttars and Anna Faye Kloepfer Buttars Atwood. She attended Logan schools and after graduating high school attended Utah State University. During her school career, Ronda was involved in dancing and singing and was nominated as one of the five top “most talented” students of Utah State University while she was there.

On November 27, 1963, Ronda married Garry Bybee, and the two later moved to Scottsdale, AZ, where Tod and Marc were born. Both she and Garry worked for Motorola Semiconductors during their Arizona years.

The opportunity arose for the family to move to Nyssa, where Garry was asked to run the onion packing warehouse for the Bybee family. Daughter Misty was born in Nyssa, and the family lived in a new home just outside of town.  Ronda began teaching dance classes in the mid-1980s, and eventually, she was instructing more than 100 students. She launched a clogging group, the Western Star Cloggers, and competed throughout the Treasure Valley as well as in Idaho and Utah.

In addition to her dance classes and touring, Ronda also found time to help bring the Nyssa Fine Arts program to life.

As the wife and mother of onion men, Ronda found herself traveling frequently, and her tribute found at https://www.argusobserver.com/obituaries/ronda-faye-buttars-bybee/article_a49073e0-9546-11e9-9e7e-83501d640e58.html shares that she enjoyed “traveling with her family to places all over the world and especially to the National Onion Association Conventions with Garry.”

A member of the Church of Jesus Christ of Latter-Days Saints, Ronda “had a strong testimony of the gospel of Jesus Christ and of our Savior’s love for each of us,” the tribute said. She will be remembered as having “made our family’s life much richer and more blessed,” and she will be missed tremendously.

In lieu of prepared floral arrangements, the family suggested that donations be made to the Owyhee ANK Garden Club, c/o Patty Price, 1729 Hwy 201 Adrian, OR 97001.

OnionBusiness.com extends our sincere condolences to the entire Bybee family, sharing in your loss and missing our friend Ronda greatly. 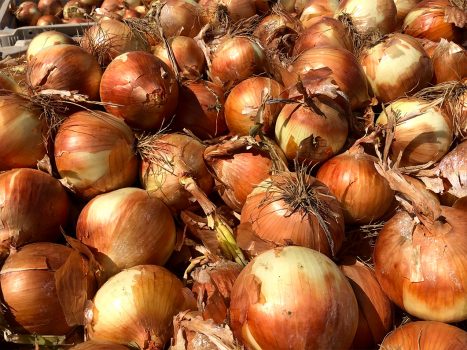