Southern California onions will start shipping within the next few weeks, with earlies out of the Imperial Valley expected to go on April 15, according to Robert Bell with Western Growers in Camarillo, CA.

Robert told us on April 3 that the crop “looks good so far.” He said there are some seeders showing up “from the unusually cold snaps we had.” And he added, “Our early onions start on April 15.”

Trent Faulkner with L&M Companies in Raleigh, NC, let us know that Calipatria, CA, is on track to start up April 22. He said, “We expect that we might have a couple of days of overlap with Washington, but we would rather have that than gap. We are just going to make the best use of freight rates for our customers while we transition.”

Trent continued, “We actually may be a little ahead of others in the Imperial Valley for crop progress. We just got a report in and everything looks great. The crop has minimal seeders, and we also received word that we have an early block of reds that looks fantastic, and with reds being tight right now, we are pretty excited to get those going.”

Many thanks to Robert Bell for sending this week’s S. Cal photos. 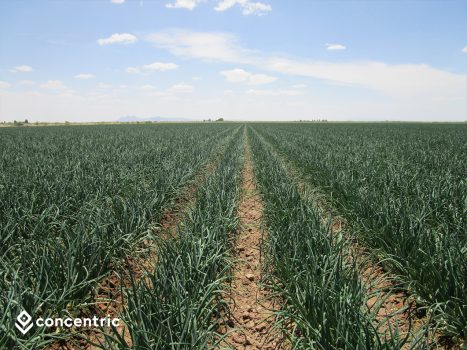