Seafood gets USDA boost with purchase of nearly $160 million

On Thursday, May 13, the USDA announced it will purchase “up to $159.4 million in domestically produced seafood, prepared fruits, legumes, and nuts for distribution to a variety of domestic food assistance programs, including charitable institutions.” That release is posted at https://www.ams.usda.gov/press-release/usda-purchase-1594-million-nutritious-consumer-ready-seafood-and-more-food-assistance.

The seafood purchase, which affects some 39,000 commercial fisheries in the U.S., comes as the Farmers to Families Food Box Program nears its sunset of May 31, which potentially affects an estimated 74,000 vegetable farms in the U.S. (2017 stats), a number that represents 4 percent of all farms in the nation. With the discontinuation of Farmers to Families, a fresh produce box in The Emergency Food Assistance Program, or TFAP Produce Box, is continued.

Both the seafood and produce programs are meant to feed those in need and to aid producers hard-hit by COVID-19’s shutdowns and restrictions, and both industries benefit from the efforts. Both industries rely to a large degree on foodservice markets.

Comparing production and consumption of domestic product in the United States, imports account for about one-third of the vegetables eaten by Americans and more than half the fresh fruit. Imported seafood, according to stats from the Food and Drug Administration in 2019, accounts for 94 percent of what Americans consume.

Those stats are posted at https://www.fda.gov/food/importing-food-products-united-states/fda-strategy-safety-imported-food, where the FDA states, “American consumers seek a safe, diverse, and abundant food supply that is simultaneously affordable and available throughout the year.  To help meet these consumer demands, the United States imports about 15 percent of its overall food supply. Today more than 200 countries or territories and roughly 125,000 food facilities plus farms supply approximately 32 percent of the fresh vegetables, 55 percent of the fresh fruit, and 94 percent of the seafood that Americans consume annually.  But this increasingly globalized and complex marketplace has also placed new challenges on our food safety system.”

The seafood stat is debated, which is addressed in this OnionBusiness article.

Also, where the seafood buy has a specified P.O. of nearly $160 million, fresh produce as a whole is not a separate USDA food program budget line item but rather part of what a USDA rep termed a “recipient-driven” program. (One story recently published in the produce trade media said the fruit and veg box has a $20 million budget, but that has not been confirmed.)

And concerning the onion industry, where Farmers to Families Food Boxes included onions specifically among the produce items, with onion volume varying from 2- to 5-pound bags and bulk, TFAP Produce Boxes do not necessarily include onions. Onions do qualify as a part of the root vegetable inclusion, which has a 3-to-5-pound limit as part of a 10-12-pound fresh produce package.

Funding-wise, Pandemic Assistance monies have been made available to supplement The Emergency Food Assistance Program (TEFAP) program for the remainder of the fiscal year ending Sept. 30, 2021, and the seafood purchases, according to the press release, “are being made utilizing funds under the authority of Section 32 of the Agricultural Adjustment Act (Pub. L. 74-320), as amended (Section 32), “one of many actions USDA is taking to address the disruptions in the food system supply chain and worsened food insecurity resulting from the COVID-19 pandemic.”

Regarding the seafood program, Ag Secretary Tom Vilsack was quoted as saying, “The impacts of COVID-19 reverberated from our farms to our oceans. U.S. fisheries and the American seafood industry were dealt a heavy blow. Today, USDA is pleased to make the largest single seafood purchase in the Department’s history. These healthy, nutritious food purchases will benefit food banks and non-profits helping those struggling with food hardship as the Biden Administration works to get the economy back on track for American families.”

The release went on to list the commodities of “Alaska pollock, apricots (canned, dried, and frozen), chickpeas, dry peas, Gulf of Mexico and South Atlantic wild-caught shrimp, lentils, navy beans, Pacific pink shrimp, Pacific rockfish fillets, Pacific whiting fillets, pistachios, prepared peaches, and sockeye (red) salmon.” And it explained that the “inventories of these commodities are in high oversupply due to a decrease in demand because of the COVID-19 pandemic and disruption in the supply chain, as restaurants and other outlets closed during the pandemic.” Moreover, the release stated, “This is the largest purchase of U.S. raised seafood by the USDA to date.”

It also said that deliveries “should start to occur by mid-August.”

Potential contractors must meet AMS vendor qualification requirements and be domestic operations, and the purchase amounts were listed, totaling $159.4 million.

Without question the seafood industry – like the produce industry – was hit hard by the pandemic and the shutdown of foodservice operators, and the nearly $160 million will help offset its losses.

Relevant stats relating to the U.S. seafood industry can be found on official websites, including the USDA and Center for Disease Control.

One CDC post from 2017 contained a story about commercial fishing at  https://www.cdc.gov/niosh/maritime/industries/commercial_fishing.html, which said that in 2017 “over 9.9 billion pounds of seafood was harvested in the United States earning over $5.4 billion. Species that contributed the most to this revenue include Pacific salmon, crab, lobster, shrimp, and scallop.” It also said there are “approximately 39,000 commercial fishermen in the United States” using a variety of fishing gear and vessels to harvest the catch.

The United States of America is the largest world seafood producer amongst the developed countries, averaging a total production volume of 5.49 million tonnes over the 3-year period from 2013 to 2015. While U.S. seafood “exports have remained approximately stable, US seafood imports have tripled in the last 20 years to reach a total value of USD $20.16 billion in 2016.”

As mentioned, that statement of 90+ percent of seafood consumed being imported is the topic of some dispute, but the story went on to say, “Alaska Pollock, pacific salmon, lobster, crab, fish roe and surimi are the United States of America’s top exported seafood products, accounting for more than 40% of the total value of exports in 2014 (source: US Department of Agriculture, 2015).” China and Ecuador are two leading sources of imported seafood in this country.

At https://www.usda.gov/media/blog/2016/12/05/tale-fish-two-countries it is explained that under the Country of Origin Labeling program regulations when fish are caught in U.S. waters and then processed in a foreign country, that foreign country of processing must appear on the package as the country of origin.

There is also a contrast in annual consumption, with 2018 stats on seafood in the U.S. reported at https://www.seafoodsource.com/news/supply-trade/us-seafood-consumption-rises-to-the-highest-level-seen-since-2007-but-falls-short-of-usda-recommendations showing that year was up from 2017 but short of USDA recommendations. “On average, Americans consumed 16.1 pounds of seafood in 2018, a slight uptick from the year before, according to the latest “Fisheries of the United States” report released by NOAA Fisheries on 21 February,” the story said. “U.S. consumers ate more fresh and frozen seafood in 2018, contributing to the highest seafood consumption level seen since 2007, NOAA Fisheries found.”

The annual consumption of fresh fruits and vegetables in the United States for 2018, as reported at in February 2021 https://www.statista.com/statistics/257345/per-capita-consumption-of-fresh-vegetables-in-the-us-by-type/, is considerably higher seafood consumption in 2017.

“Tomatoes and onions have the highest per capita consumption in the United States of any type of fresh vegetable in 2018. That year, the average American consumed around 20.3 pounds of tomatoes and 20.39 pounds of onions,” it said. A combined total of some two dozen items came in at approximately 155 pounds per capita.

At https://blog.ucsusa.org/rebecca-boehm/vegetable-production-in-the-us-lots-of-potatoes-more-kale-and-other-trends, it was reported that total veg production in 2017 was about the same as it was in 2021, accounting for the 74,000 vegetable farms across the country, representing 4.4 million acres in production. Between 2021 and ’17 total production acreage of veg decreased by 3 percent, or 126,000 acres. Potatoes occupied most of the production soil with about 1 million acres, with sweet corn second at 500,000 acres, followed by lettuce and crops, including onions.

Returning to fresh produce: While it is included in several federal assistance programs, TFAP among them, the full budget amount has been difficult to pin down.

The TFAP Produce Box, which is an addition to the original TFAP, is distributing fresh items, as OnionBusiness reported on April 15. The story can be accessed at https://onionbusiness.com/usda-produce-box-program-to-be-part-of-tfap/ and explains the box provides for 10-12 pounds of produce that “includes a minimum of at least four of the following: 3-5 lbs. of vegetables (no more than 3lbs. of root vegetables; i.e. potatoes, yams, carrots, onions, etc.), 3-5 lbs. of fruit; at least 2 locally grown fruit or vegetable items, as available, and if not available, add an additional fruit and vegetable item to meet a minimum package weight range of 10-12 lbs. Packages will be expected to have a shelf life of 7-10 days once delivered to the location listed on the contract.”

Again, the USDA cannot provide an exact dollar amount allotted to the box because the program is “recipient-driven,” as David J. Cottrell Jr., USDA Contract Specialist/Vegetable Branch/Domestic Commodity Procurement Division om the AMS-Commodity Procurement Program explained. Cottrell said the various recipients that include schools and food banks have an entitlement that they can spend “any way they want.” He also said that in Section 32 programs the USDA purchases surplus commodities. The recent story on the issue that said the TFAP Produce Box budget is approximately $20 million likely extrapolated the figure from the number of program bids and the resulting total box estimate, Cottrell noted.

He also said Farmers to Families Food Box Program was an immediate response to COVID-19, going on to say, TFAP is “more like a normal food bank delivery.” 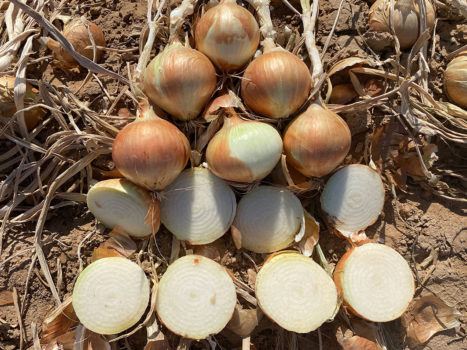