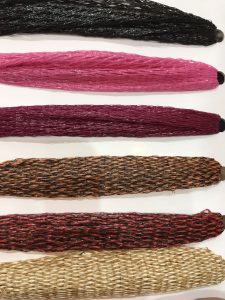 Among the onion industry highlights during PMA’s Fresh Summit in New Orleans was the Sev-Rend rainbow display of newly introduced Colortone Netting.

By blending different netting colors, Sev-Rend has the capability of adding “extra depth to customers’ knitted produce packaging,” according to a company release.

OnionBusiness caught up with Sev-Rend Graphics and Marketing Manager Jeff Watkin this week to chat about the Collinsville, IL-based operation, and Jeff provided us with additional information on the company itself and its product lineup.

“Sev-Rend was started in 1993 and will be celebrating its 25th anniversary next year,” he said, adding that the initial products were developed with a focus on onions.

Jeff added, “The initial products were tags and labels. We made strip and wineglass tags, and over the years we’ve evolved to offer a plethora of items for onions and for other product as well. In the past five years, we’ve developed our own netting for both tags and for film. We’re one of the few manufacturers of netting here in the United States. Our lead time is significantly quicker, which is a big advantage for customers.”

The operation is centrally located for the onion industry, with its headquarters located just outside of St. Louis, MO. It has distribution points in the Southeast and on the West Coast, with regional sales locations in strategic locations as well.

Jeff, who joined Sev-Rend in February 2012, said another high point in the company’s evolution came with the addition of film for the consumer packages.

“I see the onion industry gravitating toward that, and it’s very advantageous for branding and labeling,” he said. With a background in marketing and branding, Jeff is part of the team that researches and analyses product development.

He’s worked closely with a number of onion operations, and he said he’s seen a couple of interesting trends.

“Across the board the yellow onion is dominant,” he said. And he added, “Red netting has long been really big in the onion industry. Now we’re starting to see other colors being requested to accommodate or complement the customer’s brand.”

He said colors are also used for promotional packaging, such as pink for National Breast Cancer Awareness Month.

“We do get some unique requests,” he said. “We developed a burlap tone netting for one onion company as well as a red and black netting for a newly rolled out product.”

Jeff added, “Definitely Colortone is our big push, and clients are coming to us frequently for custom colors.” 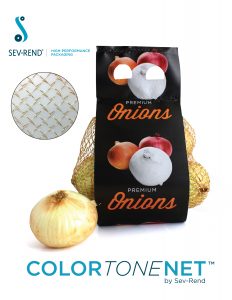 At its manufacturing plant, Sev-Rend operates “a carefully controlled production environment where we use proven processes, select materials, and the latest equipment and technology,” the website notes. Jeff noted the site is being revamped and is expected to go live with its new design in early 2018. 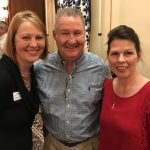