Robert Bell from Western Onion Sales headquartered in Camarillo, CA, said the intermediate and long-day onions coming out of the area south of Bakersfield in the Central Valley of California are looking good, and short-day varieties are shipping now after an early harvest.

“The reds and whites are all packed,” Robert told OnionBusiness.com on June 7.  “We’re on track with the deal, and we’re chugging along.”

On June 3 he had noted that cool temps the previous week had given crews time to “work out the kinks, bring some slightly green onions into the shed, put them on the air wall and dry them down. We began packing those late last week and this week. Arrivals so far have been positive and quality is good.”

He also noted on June 3 that some short-day fields in the Bakersfield region had mildew issues that appeared just as the onions were finishing. “The mildew doesn’t affect the yields,” he said, adding that weather had been conducive to that condition. “We had a warm winter and high humidity for the short-day crop that was planted in October.”

“For us this caused the tops to die rapidly, leaving the onions exposed. We started applying liberal amounts of Surround and Eclipse last week [late May] when it was cool to prepare the crop for the heat that was sure to come.”

There has been no decay in the onions, and Robert said the fields with mildew were worked through quickly.

“The later onions’ volume is not affected, but in the short term the volume is increased as growers get through the crop faster.”

He also said that organic fields had shown no mildew at all. “They were all irrigated at night,” he commented.

On sizes, he said, “they are running about 60 percent at 4 inches and were planted for processing.” He continued, “We have all sizes, from super colossals down to mediums, although we have a lower volume of mediums.”

During the week of May 30 Robert said the markets were good, but demand was soft early in the week. This week we’re hearing that markets are off due to more onions available from other areas.

One issue that hasn’t changed is the tight labor pool. Last week Robert said Western Onion had harvesters running in three different areas, and he was “trying to hire and train new people and work out the bugs in the packing line expansion.” As a result, he said, “I’ve picked up additional custom mechanical harvest work due to the lack of hand crews.” 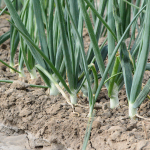