The March 9 suspension by the U.S. Department of Agriculture of South Texas Onion marketing order 959, which failed to receive adequate votes for continuation in a Sept. 21-Oct. 13 referendum of growers in that district, was reversed on March 15 by the agency and confirmed by the office of USDA Agricultural Marketing Services Deputy Administrator Sonia Jimenez.

The reversal was one in a series of recent actions on the matter. After the September-October referendum, which is held every six years, failed to produce enough votes for the marketing order to be sustained, it was announced that the marketing order would be dropped but not until the South Texas onion season had run its course from March through June. The March 9 announcement that the marketing order had been suspended, effective that day, caught the industry by surprise.

At that time the AMS said, “USDA will work with the South Texas Onion Committee to begin the process of terminating program operations. Assessment collection and all other provisions will cease immediately. Rulemaking and comment proceedings will take place in the coming months to remove the marketing order from the Code of Federal Regulations.”

The unexpected March 15 email to SOTC members from Dante Galeazzi, manager of STOC and CEO/president of the Texas International Produce Association, related that he and Deputy Administrator Jimenez had spoken that day, and the USDA official had “shared with us that USDA will be reinstating both the domestic and international regulations associated with the South Texas Onions, Federal Marketing Order (FMO) #959, effective March 16, 2021.”

A separate letter also on March 15 from Deputy Admin Jimenez noted, “The Agricultural Marketing Service is issuing a clarification on the Notice to Trade that was issued on March 9, 2021, announcing the suspension of enforcement provisions of the Federal marketing order for onions grown in South Texas.

“AMS is initiating a rulemaking process to provide the public with an opportunity to comment on a proposed rule to terminate the marketing order. Enforcement of the obligation on the part of regulated handlers to pay assessments to the South Texas Onion Committee remains suspended. In order to provide for a smooth transition and because the Texas onion season has already started, the requirement for grading and certification services performed by the Federal and Federal-State Inspection Service remain in effect until the rulemaking process concludes.

Between March 10 and June 4, mandatory grading and certification services will be performed for onions produced in the South Texas onion region and for onions imported in the United States.

USDA is coordinating with the South Texas Onion Committee and with industry groups to ensure clarity on the handling regulations going forward.”

Galeazzi said the reinstatement will again require that all imported onions be subject to an 8e Inspection requirement prior to entering the U.S. marketplace, and all Texas onions must be packed and reviewed prior to shipping by Texas Cooperative Inspection Program (TCIP) personnel.

In addition, Texas onions grown in the 35 counties of the marketing order must comply with the minimum requirements of FMO #959. U.S. grade #2 – cull – onions grown in Texas may only be sold to food banks and approved processors.

And all shippers and packers of Texas onions must complete and return a Handler’s Packet to the STOC. Galeazzi said, “USDA will be providing a letter which further elaborates on the above changes.” He added that USDA personnel have “made themselves available to field additional comments or questions on this matter, including Deputy Administrator Jimenez.” 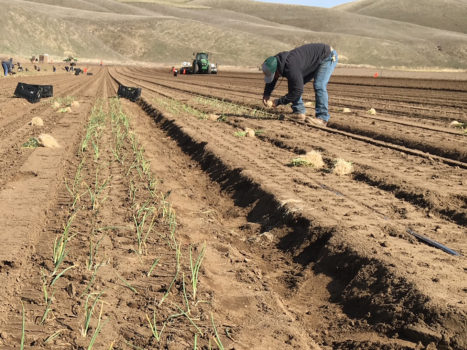